And his latest shows why irony still matters 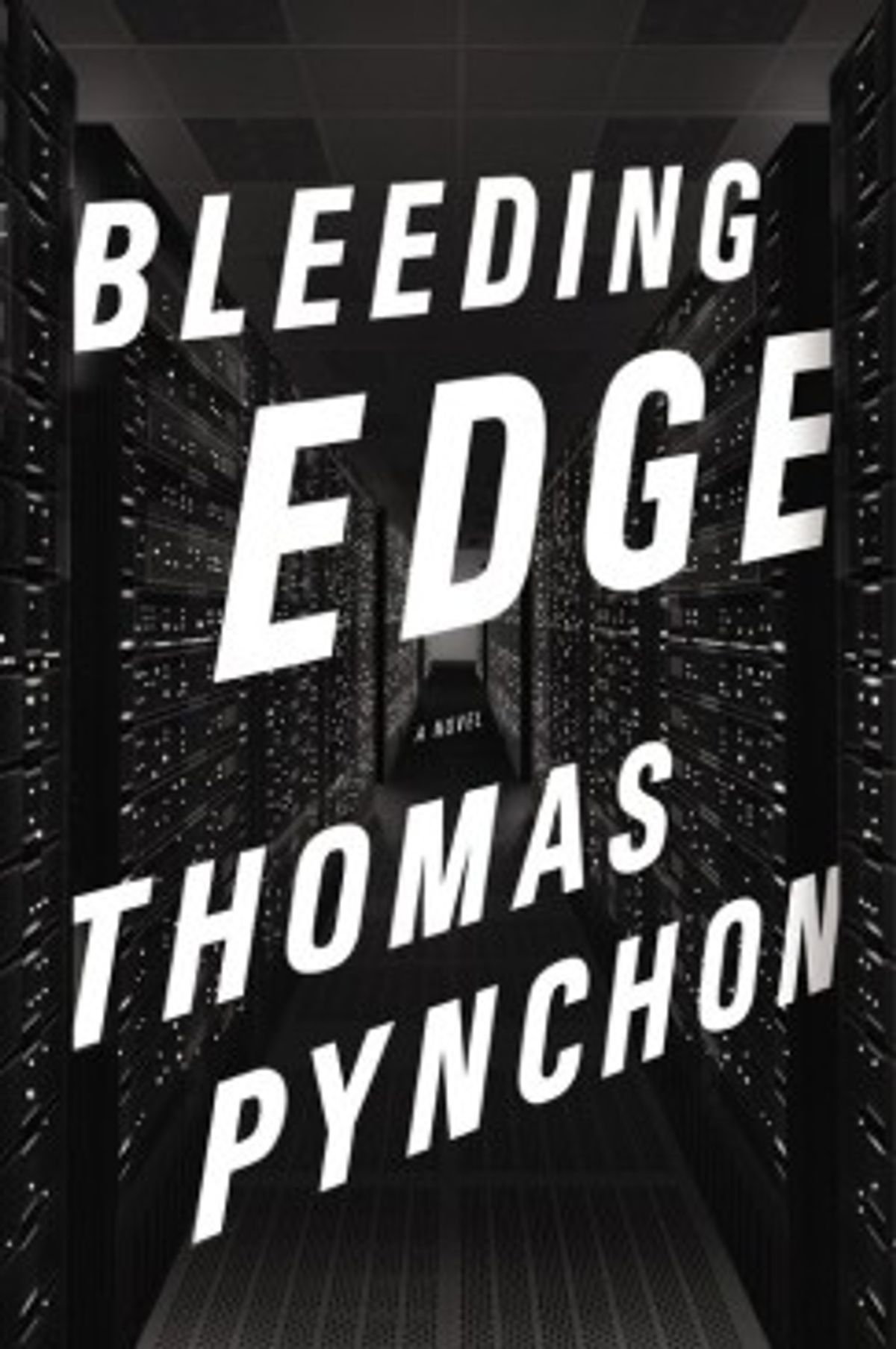 A HALF CENTURY into his career, one thing is clear:  Thomas Pynchon plays insider baseball.  Whatever else he may be attempting, his novels always include a knowing nod to the already initiated.  Bleeding Edge is no exception.  This time, our guide through the underworld is one Maxine Tarnow, a second take on Oedipa Maas, revised and reanimated on the Right Coast.  Much like Pynchon’s other defective detectives, Maxine is forever unraveling an irresoluble conspiracy, and the readers, along for the ride, are equally unable to untangle the yarn.  With all this reweaving, however, there’s plenty for Pynchon’s previous visitors to enjoy.  Misha and Grisha, for example, the cartoonish Russian hench-children from Against the Day, get a giggling reboot.  Longtime Pynchoniacs on the lookout for Pig Bodine won’t be entirely disappointed either.  The porcine one may not make an appearance, but we do get his snooty surrogate, a freelance professional nose named Conkling Speedwell.  Conkling, moreover, has a “proösmic” colleague who can foresmell the events of 9/11, just as Slothrop’s erections foretold an earlier screaming that came across the sky.   It isn’t just the characters that are redoubled and refracted, however.  Pynchon also recycles most of his other methodological tics — from the farcical, made-for-TV movies that litter Vineland to the soundtrack that accompanies Inherent Vice.  It’s déjà vu, as Yogi Berra always sez, all over again.

So several chapters in, when “bleeding-edge technology” is virtually dismissed — “No proven use, high risk, something only early-adoption addicts feel comfortable with” — we’re already hip to the double entendre. This isn’t just a novel that recycles, nor is it merely a novel that knows it recycles.  This is a novel that knows that its readers know that it recycles.  And it delights in those instances.  When Meatball Flag’s hit single “Soul Gidget” reappears, for example, we don’t get the original song or even a cover version, but rather eight bars of a cappella backup:  the imaginary black surf music of Inherent Vice has been reimagined as accompaniment to a second-order sing-a-long.  An early indication of the self-reflexive riffing-to-come appears just eight pages in, as the novel’s documentarian-in-chief, Reg Despard, bootlegs first-run films with a handheld camcorder:

When Reg discovered the zoom feature on his camcorder, there was a lot of zooming in and out for what you’d have to call its own sake, details of human anatomy, extras in crowd scenes, hip looking cars in the background traffic, so forth.  One fateful day in Washington Square, Reg happened to sell one of his cassettes to a professor at NYU who taught film, who next day came running down the street after Reg to ask, out of breath, if Reg knew how far ahead of the leading edge of this post-postmodern art form he was working, “with your neo-Brechtian subversion of the diegesis.”

And so we’re off, Pynchon pirating his own oeuvre, hawking copies of copies with a wink and a nod.

But wait — there’s more.  Re-presenting his previous work isn’t the only way that Pynchon weaves his web.  He also plays the insider game by overloading the text with obscure particulars.  There is, in other words, a lot of zooming in and out for what you’d have to call its own sake, a welter of specific — and occasionally unsettling — minutiae.  The vertiginous effect that results does not come from a rapid change in perspective, but rather from the banality of the details themselves — plain, ordinary, and inconsequentially real.  The most paranoid among us (Andrew Leonard at Salon?) begin to believe that Pynchon must actually be reading us, and, in a way, he is.  The trick amounts to the literary equivalent of a “cold reading,” a paranoid narrative inducing the same by offering readers a multitude of “relatable” (if meaningless) details.  Primed for paranoia, we personally identify with the occasional particular, and the effect can be unsettling.  My own frisson of familiarity, for what it’s worth, was triggered by a pair of gratuitous Midwestern references:  Duck Creek Plaza in Bettendorf and the Hy-Vee commercial that Maxine’s kids can’t stop singing.  Neither have anything to do with anything, but they’re creepily specific, especially if one was the turnaround for your high school cross country team, and the other, well, you appeared in one of those blasted commercials as a high school bagboy.  Suddenly you’re wondering what the hell Pynchon was doing in the Quad Cities.  (Nothing, likely — at least that’s how I remember high school.)

These two methods of provoking engagement with the text are worlds away from the brand of self-identification on which Oprah built her literary empire.  There are few characters with any psychological depth, no edifying bourgeois trajectories, and certainly no readymade solutions for the self-help generation.  For all the reality in Bleeding Edge, in other words, we’re still not getting much of the realism that my students and Michiko Kakutani are always grumbling after.  (And, yes, in her latest dispatch, wired in from wherever it is she lives in the nineteenth century, Kakutanidismisses this one too, just as she does all the other contemporary fiction worth reading.)

But realism isn’t the point, even when reality is.  The novel’s biggest surprise, perhaps, is that 9/11 actually happens.  We get the event itself — planes flying into the World Trade Center — right there in Chapter 29.  It’s a cross up, a quick pitch, something unexpected.  As even the casual Pynchon fan can tell you, the man rarely delivers the event.  He’s more likely to leave us with a bouncing ball, waiting for the bomb or the auctioneer or whatever.  But not this time.  The move, ultimately, is rather audacious, for it forces Pynchon to spend the balance of the novel navigating the narratives of the real world, a minefield of batshit crazy truther nonsense.

In his 1990 essay “E Unibus Pluram:  Television and U.S. Fiction,” David Foster Wallace famously attempts to see a way forward for American fiction.  Mass televisual culture, he offers, has co-opted and usurped the tropes and techniques of postmodern literary fiction.  Consequently, irony has lost its teeth, become a televisual trick, the dominant cultural mode rather than a legitimate countercultural response.  Whatever one thinks of Wallace’s prescriptive solution (a literary coup engineered by a band of sincere anti-rebels, apparently), he certainly puts his finger on the mass-cultural zeitgeist of the decade to follow:  the 90s were “rather ironic.”

Fast forward a few years.  In the immediate aftermath of 9/11 we were inundated with even more middle-minded platitudes than usual.  For a few months, every other commentator you encountered was touting “the death of irony,” as though one tragic, real-world event had somehow eliminated all access to a literary device.  It was a fascinating fiction, though.  If mass culture had co-opted postmodernism’s irony, then why not post-postmodernism’s sincerity as well?  In Bleeding Edge, this issue is brought to the fore by Maxine’s friend Heidi, who

has been working on an article for the Journal of Memespace Cartography she’s calling “Heteronormative Rising Star, Homophobic Dark Companion,” which argues that irony, assumed to be a key element of gay humor and popular through the nineties, has now become another collateral casualty of 11 September because it somehow did not keep the tragedy from happening.  “As if somehow irony,” she recaps for Maxine, “as practiced by a giggling mincing fifth column, actually brought on the events of 11 September, by keeping the country insufficiently serious — weakening its grip on ‘reality.’  So all kinds of make-believe — forget the delusional state the country’s in already — must suffer as well.  Everything has to be literal now.”

Heidi goes on to use her “death of irony” critique to explain the explosion of reality television in post-9/11 America.  “Somebody,” she tells Maxine, “needs this nation of starers believing they’re all wised up at last, hardened and hip to the human condition, freed from the fictions that led them so astray, as if paying attention to made-up lives was some form of evil drug abuse that the collapse of the towers cured by scaring everybody straight again.”

Here and elsewhere in Bleeding Edge, Pynchon confronts the legacy of postmodern fiction directly.  Heidi’s pseudo-scholarly paper is unmistakably a vehicle for poking fun at academia, with our obscure journals, pretentious formulations, and tortuous arguments, but Pynchon buries a cultural critique — and one that we’re clearly supposed to take “straight” — right in the middle of it all.  Ironized critique with a truthy nougat center.  What’s more, Pynchon is not only mocking the cultural backlash against irony, but he’s also issuing a gentle rebuke to the likes of Wallace.  It’s 2013, and here’s the grand old man of postmodern letters, rapping on about mixtapes and purple drank, still spinning the same metafictional yarn that supposedly expired sometime back in the 1980s.  But while Pynchon might be getting the last laugh, the laughter is a little nervous, and not because the culture is shot through with irony, or sincerity, or counter-irony, but because his paranoid postmodern conspiracies have finally gone viral.

At the beginning of Chapter 30, immediately following the events of 9/11, we get three full pages of narratorial commentary, the only such passage in the entire novel.  It is, in some respects, a mimetic move:  as the real world wrings it hands and tries to come to grips with the “death of irony” and our “new reality,” Pynchon’s narrator takes a step away from his fiction.  The three pages that follow could have been lifted from a non-fiction period piece, a 9/11 version of “Journey into the Mind of Watts” or some similar essay.  “If you read nothing but the Newspaper of Record,” the section begins,

you might believe that New York City, like the nation, united in sorrow and shock, has risen to the challenge of global jihadism, joining a righteous crusade Bush’s people are now calling the War on Terror.  If you go to other sources — the Internet, for example — you might get a different picture.  Out in the vast undefined anarchism of cyberspace, among the billions of self-resonant fantasies, dark possibilities are beginning to emerge.

“Oh, shit,” I think, on hitting this passage for the first time, “Pynchon’s gone truther.”  Not quite.  Before the section has even ended, it becomes clear that the narrator has no time for certain real-world conspiracy theories (including, for example, the allegation that a secret Muslim network warned all NYC pushcart operators to stay home on 9/11).  What does concern the narrator is how such beliefs “take hold of the civic imagination,” and, subsequently, how these narratives are then broadly exploited.

Nevertheless, for the final eleven chapters, Pynchon must walk the finest of lines — guiding the novel’s own “conspiracy theory” through a minefield of real-world, false-flag fictions.  Ultimately, part of the pleasure of Bleeding Edge is watching a master of postmodern paranoia navigate fiction’s complicity in the web-driven conspiracies of the real world.  If television usurped postmodern irony, the Internet has certainly inherited its paranoia, and Pynchon’s Bleeding Edge endeavors to subtly subvert this virtual creep.