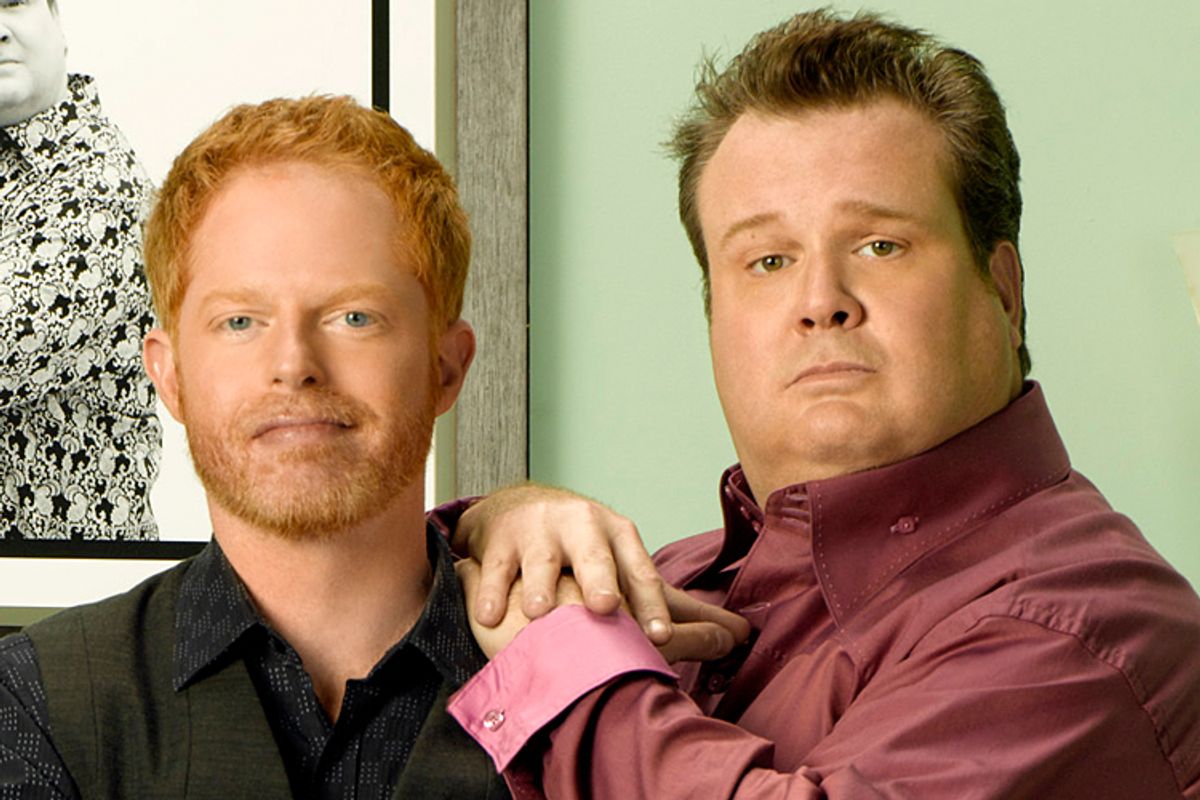 "Modern Family," the near-universally celebrated and Emmy Award-winning sitcom about -- you guessed it -- a modern extended family, deserves plenty of the positive attention it has received. In the narrow scope of what it means to be "diverse" on network television, it is diverse. Of particular note, according to many critics, is the show's depiction of Mitchell Pritchett and Cameron Tucker -- the argumentative-but-sweet, newly engaged gay couple who round out the extended familial clan.

And as it turns out, beyond making for good television, the weekly presence of lovable Cam and prickly Mitch in living rooms across America -- along with decades of other cultural representations of gay characters in film and television -- has an actual impact in the world. According to recent research, gay characters in pop culture (and the sometimes real gay people who play them) have done quite a lot to influence the American public's views about marriage equality and other important things, like, say, not reflexively hating gay people.

"Modern Family" is sweet, funny and has done some good. It will very likely continue to do so.

But, that said: Please, let Mitchell and Cameron have sex already.

Back in 2010, noticing a real lack of sexual chemistry (or, according to some critics, even a modest level of warmth) between the pair, the people of the Internet started a petition urging the writers to get the PDA-averse couple to kiss. ABC, after issuing a statement telling fans to, in Phil Dunphy parlance, "chillax" and wait for the back story to their neutered personae, gave fans what they seemingly wanted: an incredibly chaste peck.

The episode was charming, and managed to explain, in a way that felt true to the characters, the near total absence of displays of romantic affection exchanged between the Pritchett-Tuckers. But the show, which has the feel of a documentary film crew capturing all aspects of these families' lives, has, for each of the straight couples in the show -- and even Phil and Claire's teenage daughter, Haley -- alluded to, or outright caught them in the act (of sex!).

A few examples: Jay, the family patriarch, and his younger wife, Gloria, get pregnant in Season 3. An episode in the following season is dedicated to the couple's effort to revive their sexual chemistry post-baby. Meanwhile, in the very same episode, Phil and Claire sneak off to a hotel (once again) to explore some moderate kink and role-playing (!!!), only to be interrupted by a medical emergency. It's all packaged in family-friendly innuendo, but it's quite clear that these couples have sex lives.

Not so for Mitch and Cam. Mitch and Cam do not get to have sex. (Or attempt to, only to be thwarted by circumstance, like the other characters.) They spent that particular episode getting drunk and dyeing cats pink. They later try to take a page out of Phil and Claire's romantic playbook with a date at a hotel bar, though it abruptly ends there. But why?

"The simple answer is that they never have sex, though that seems unlikely," Michael Bronski, Professor of the Practice in Activism and Media Studies of Women, Gender and Sexuality at Harvard University, tells Salon.

"But we would also really have to stretch our minds to find a mainstream television show that actually focuses on demonstrable and visible gay male sexuality and desire," Bronski continues. "Despite all of the legal, social and cultural gains of recent years, most Americans remain profoundly uncomfortable with the notion of gay sexuality."

With the exception of more niche programs (or shows locked behind premium cable pay walls) like "Orange Is the New Black," "Queer as Folk" and "Six Feet Under," there is a shocking degree of silence on the sex lives of gay characters. And when gay characters do serve as the centerpiece of a show, they are often completely celibate. "Modern Family," like "Will and Grace" and "Ellen" before it, seems to bear this out. Cam and Mitch are an integral part of the fictional family, but they don't get to share in the sexual charge or the schmaltzy innuendo that the show's other couples deal in.

Five seasons into the series, it would seem only natural for the ever-present cameras following this family around to have caught the couple -- at least once! -- pre-, mid- or post-coitus. Such a non-event could easily be played for laughs, as are so many of the show's other sexual high jinks. Imagine Cam and Mitch, the exhausted parents of a young child, finally making time for sex when -- all of a sudden, shirts rumpled, pants hastily refastened -- one of them has to run out of the bedroom to check on their crying daughter, Lily. A humiliated glance is exchanged with the camera. The audience laughs. And ... scene.

But the absence of a sexual identity for Cam and Mitch isn't really just about "Modern Family," of course. Our culture's aversion to gay sex, and mainstream entertainment's squeamishness about showing or even alluding to it, is nothing new. As much progress as we've made in terms of representation (class-blind and overwhelmingly white as these gains may be), sex continues to be an abstraction for gay characters.

These sexual omissions, the desire and eroticism of gay life that is "so blatantly white washed" from mainstream entertainment, "feels like a lie," Rich Juzwiak, a staff writer at Gawker who writes frequently about pop culture and sexuality, tells Salon.

It's a familiar neutering strategy. One which we saw play out, to great success, in the mainstream marriage equality movement. In its effort to secure equal marriage rights, groups like the Human Rights Campaign and Freedom to Marry painted a very palatable (and, of course, utterly realistic for many gay couples) portrait of suburban families who want the same things every other committed, long-term couple wants, like the ability to share health insurance, gain access to tax breaks and the like.

But the message behind the movement was, and continues to be: Gay people are just like straight people in their desires for safety, stability and mainstream acceptance. And that other thing? That sex thing? Let's not talk about it.

"In public discourse, sex acts that not so long ago were widely criminalized have gone largely unmentioned amid the torrent of high-minded rhetoric about equality," notes Stephen Holden in a recent New York Times piece on gay sexuality and film. "The face of gay liberation in 2013 is a sanitized image of polite, smiling gay and lesbian couples parading hand in hand and exchanging chaste kisses at city halls in states where gay marriage has been legalized."

"These [advocacy] groups are predicated, particularly in the fight for marriage equality, on the idea that gay people are just like straight people and want what straight people want," Bronski says. "This also presumes [the desexualized notion of middle class, marital commitment] is what all heterosexuals want, which is clearly not the case."

"What these organizations do, though they do good work, is predicating their pitch on a myth. It is based on a lie," he adds.

But, given the power of pop culture to shape and influence people's views, wouldn't a little romp between Cam and Mitch go a long way in terms of deflating homophobic squeamishness about gay sex? Our recent cultural history suggests the answer is yes. According to polling data, close to 20 percent of Americans surveyed say that the experiences of gay television and film characters shaped their views on issues like gay marriage. (That percentage goes way, way up among younger people.) And subtler gains in terms of visibility and acceptance facilitated by the presence of gay characters in mainstream entertainment can't be understated.

But gay desire, and even vanilla, married (or soon-to-be married, as is now the case for Cam and Mitch) gay sex, remains taboo. Changing that, and moving toward greater acceptance of all expressions of sexual desire (gay and straight), means that shows like "Modern Family" must be willing to go there. "There," in this case, being the chaste, safely PG coitus and sexual banter enjoyed by the show's straight couples. A small step, but an important one.

"You understand the reasons for it, obviously, but how admirable is something that is going to toe the line rather than go in there and change things up?"  Juzwiak says. "Sometimes, something can be both good and not good enough."