Our family photos feature the tragic Hollywood legend. But until recently, I never understood the reason why 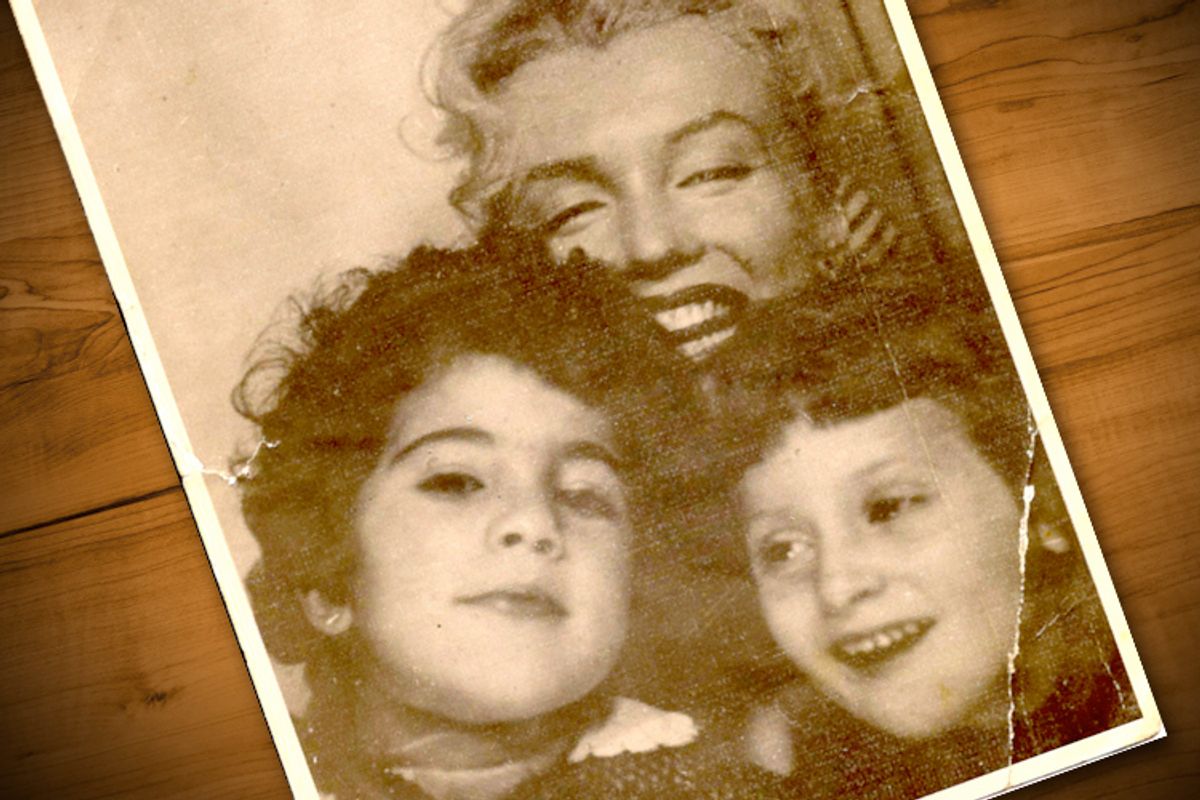 “Marilyn Monroe was my mother’s baby sitter,” I used to tell the neighborhood kids, whenever our rambunctious play took us inside the house. The girls went open-mouthed with wonder and admiration. The boys were skeptical, even scornful: “Movie stars don’t baby-sit!”

But then I'd point to the photo-booth image hanging in the vestibule of my childhood home. The picture was displayed in a prominent spot, where religious icons hang in Catholic homes. As little kids, we'd crane way up to see it, or scale the adjacent staircase and stretch our necks awkwardly.

In the photo, my mother holds a pursed smile while looking right into the camera. A mass of dark curls surrounds her face as she upstages Marilyn in a way no studio executive would allow. Cousin Laraine is caught unawares by the flash; she looks out of frame with a half-smile. Marilyn is grinning candidly -- not the practiced smile she’ll use for thousands of subsequent photos.

The Marilyn story has been told and retold (and mis-told) for decades in my family. Marilyn Monroe wasn't exactly my mother’s baby sitter, but that’s how I understood it as a child. Now, as an adult, I wanted to discover the truth behind it.

It begins with my Grandma Helen, a local pageant contestant. “A real beauty,” my great uncles used to say. I keep a snapshot of her wearing a stylish one-piece swimsuit and wedge heels, posing and smiling brightly, with milky skin, wavy black hair, ample curves, and a birthmark just in the right spot above her mouth. It’s punctuation on her pleasing face, like the dimples bracketing her smile. Her family crossed over from Amalfi, the storied town along the picturesque coast the town lends its name to.

Helen was in the middle of a brood of nine. To the dismay of her parents, she fell in love with Tony Rizzo, an intense Sicilian. Grandpa Rizzo had swarthy good looks and a stunning pompadour, but Grandma Helen’s family looked down on dark-skinned Sicilians. “You’re not marrying that African!” her father sputtered when she sought his blessing. The headstrong Helen defied him, and the young couple settled in San Francisco.

There she was befriended by a neighbor, Marie DiMaggio. The DiMaggios were also Sicilian; Guiseppe, the patriarch, had fished Mediterranean waters, and relocated to the Pacific coast in pursuit of a bigger catch. His haul out of San Francisco bay was bountiful, and he went on to raise nine children. To his initial disappointment, three of his sons turned their backs on the family trade to become baseball players. Joe was the real power slugger, having gone on to a record-breaking hitting streak with the Yankees. Around the time the DiMaggios befriended my grandparents, Joe began courting Marilyn Monroe.

Joe brought Marilyn around on visits to get to know his family. During one visit in late 1953, two pictures were taken: In one of them, Marilyn and my grandmother Helen are seated on the couch. Helen gives Marilyn an affectionate hug, and Marilyn is smiling warmly. In the second shot, Helen stands behind Marilyn with a protective hand poised lightly on her shoulder, while my Great Aunt Rose, Helen’s older sister, looms and fawns over Marilyn like a hungry vulture; Marilyn has notably shifted her body away. When Great Aunt Rose heard that Marilyn was spending the weekend, she bought a ticket from New York to San Francisco, and tagged along uninvited.  On the back of the photo, Helen wrote: “Marilyn had a rash on her face at the time and didn’t want to be photographed, but Rose insisted. Marilyn agreed as long as it was black & white.” My mother isn’t in either of those photos, but she was around that day with her cousin and playmate Laraine, and the presence of these two playful little girls warmed Marilyn’s heart; she longed for children of her own. She took to the girls instantly and showed them great affection.

One day, Marilyn offered to take them to Playland. Laraine’s mother, consumed with a newborn, thought it would be good to get the girls out of the house. The trio took off to the amusement park, with Marilyn driving the short distance in her Pontiac convertible. The drive took them from Sunnyside, the working-class district of turn-of-the-century bungalows, to the coast just north of Golden Gate Park. Playland occupied 10 acres along the shore, with its Big Dipper roller coaster, its Shoot-the-Chutes ride, and a chicken coop-themed restaurant called “Topsy’s Roost.” The girls both liked the pretty blond lady who was taking them to Playland, but the main attraction was the Ferris wheel. It would be their first visit to the park.

Marilyn first stepped into the spotlight in the early '50s, with featured roles in several films. She also appeared on the cover of the inaugural issue of Playboy magazine in 1952. By the time of the Playland expedition, she’d starred in two hit films: the moody melodrama “Niagara” and “Gentlemen Prefer Blondes,” singing, vamping and dancing through her indelible performance as Lorelei Lee. Her fame was just beginning to surge; she took the precaution of wearing a headscarf and dark sunglasses.

The trio first found a photo booth, and posed for the picture that hung in the vestibule. Grandma Helen wrote on the back: “This is a 25¢ picture taken at Playland. She wanted to go on the rides with your mother & cousin Laraine. A sailor recognized her & she took a picture with him and it got around & the police were called. It was frightening.” A brisk wind blew Marilyn’s headscarf off her signature platinum bob, giving that sailor a jolt of recognition. My mother vividly recalls the only ride they got that day -- rushed through the throng out of the park on the shoulders of San Francisco policemen.

In January 1954, shortly after this ill-fated excursion, Marilyn and Joe married at San Francisco’s City Hall. By most accounts, Marilyn was retreating from the celebrity that engulfed her, making simple things like a trip to Playland impossible. She wanted to settle down and live like Grandma Helen: cooking, keeping house, raising children. In my grandmother’s own words: “Marilyn just wanted to be a good Italian housewife for Joe.” That’s probably what Joe wanted, too.

Marilyn may have seen my grandmother as the archetypal Italian housewife, but Grandma Helen went on to other roles, too. She was an early working mom, and had a second career as the co-owner of a nightclub called the Keyboard Lounge. The Grandma Helen I knew smoked Parliaments and wore leopard-print housecoats with big earrings. She ruled the home I grew up in with a big wooden spoon. It was an ordinary tract house on a large, irregular waterfront plot on the South Shore of Long Island. She prepared entire meals from the dual bounties of the creek and her garden; I can still taste her garlicky mussels, topped with a generous handful of flat parsley.

Sunday dinner was the main stage of my childhood. Everyone came to eat Grandma Helen’s cooking and drink Grandpa Rizzo’s red wine, and there was much singing, more yelling, and even the occasional portent of violence, like in any good opera. Epic, filthy insults, obscene hand gestures, and ancient curses were common, but Grandma Helen alone accentuated her threats with kitchen implements.

I used to trail her in the kitchen; she taught me the basics of Italian cooking. She’d share her storied past, too, and show me her gowns. I’d run my hand over the sequins. I’d ask her to tell me the Marilyn story again. When she told it to a crowd, she assumed the tenor of a warmly sentimental raconteur, but with me, her tone carried unresolved grief. "Poor doll!" she'd say, her eyes distant. It’s sad to lose a friend twice -- once to fame, and again to a tragic and very public death. But I couldn’t help wondering if the loss of her friend, the glamorous movie star, stood in for the loss of her own glamour; she’d long ago hung up those gowns for those housecoats.

This central family icon, the 25¢ photo booth picture, marks a confluence of currents in mid-century American life: the rise of automation; the golden age of the Hollywood studio system; and the advent of a postwar middle class, availing of leisure and distraction at a theme park. To my impressionable mind, it was central to the accumulated mythos of my maternal clan. Their operatic melodrama, Grandma Helen's sequined gowns, her dimpled beauty queen past, her late-life shift to nightclub hostess, the Sicilian passion, the call of the sea -- all presided over by the spectral smile of the tragic platinum starlet. A deep, dark shadow of '50s noir cut across the bole and limbs of our family tree, like a secret locked in Grandpa Rizzo’s study, like the unknown expanse beyond the still waters of the creek, like the mysterious alchemy Grandma Helen’s rage and drive brought to her kitchen.

The life Marilyn sought in San Francisco was to elude her. Her marriage to DiMaggio was over before the year ended. As the demands of her career pulled her from his side, Joe’s Sicilian temper flared. The family-bound life my grandmother lived may have seemed like a trap of its own to many women, but for Marilyn, it was unattainable. That Marilyn was photographed with two smiling little girls is a portent of her future suffering; during her second marriage, to playwright Arthur Miller, she lost two children to miscarriage. Perhaps it’s more accurate to say that my earthy, passionate, headstrong, bawdy Italian grandmother lived a life Marilyn dreamed about, instead of my boyhood boast.

Then again, perhaps that boast does well enough to honor her longings. Marilyn Monroe was my mother’s baby sitter, even if for an afternoon, and kept her safe from the throngs she could never control. The relaxed intimacy of that photo-booth moment would be soon swallowed in mania; that carefree joy fleeting, like a chiffon headscarf in the wind. In our house, Marilyn belongs to the current of maternal warmth that brought my mother up in the world and equipped her to raise her two boys. Her spirit bolstered another woman with longings beyond the limitations imposed by others.

Part of me is still that star-struck little boy who wants to boast to the world of my association with glamorous Marilyn, the archetypal American movie star. Today the photo from Playland, which sits on my desk, has another meaning. Having prompted conversations and reminiscences with my mom and Cousin Laraine in preparation for this story, we’ve strengthened our family bonds, and put to rest some unresolved emotions. Whatever she is to you, she’s the smiling blond lady who beams at me from behind my mom’s curls, and binds me to the women of my family, across divides of generations, loss and modern displacement. Brooklyn-born Dale Corvino is currently at work on a remembrance of society decorator Stuart Greet. His writing also appears in the Soft Skull Press Anthology "Johns, Marks, Tricks and Chickenhawks."