White people: You are not straight outta Compton

A retailer withdraws its N.W.A.-themed apparel, but the appropriation goes on 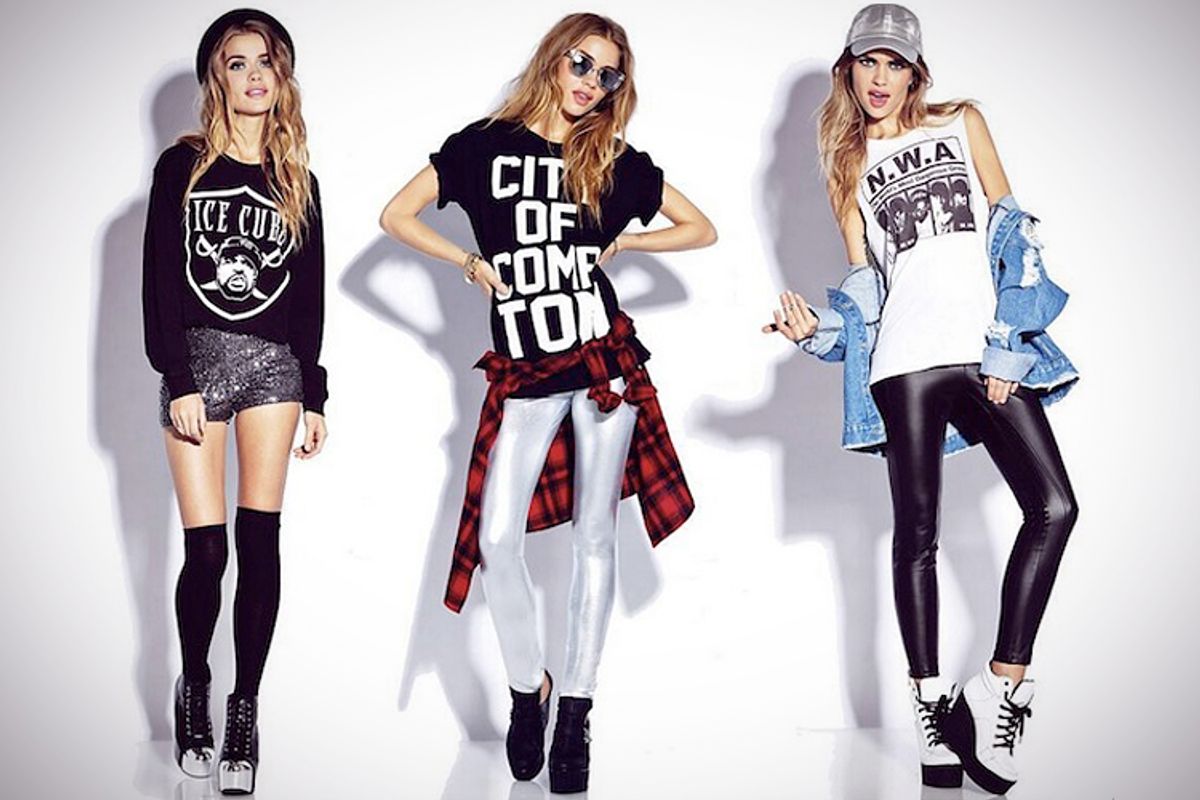 It's not that white people appropriating African-American music and imagery is anything new.  But there's got to be a less asinine way than this.

Earlier this month, purveyor of all things fug Forever 21 came under fire for blithely tweeting out the announcement of some "New arrivals ... straight outta Compton." Hilariously, the chain accompanied the message with a photo proudly showcasing a long-haired blonde striking saucy "Come at me" poses while sporting shirts emblazoned with Ice Cube, N.W.A. and a simple logo screaming "City of Compton." Because nothing says "I have mad street cred, yo" like a model who looks like a teenage Viking. The response from the Twitterverse was an immediate surge of righteous disdain. Critics noted that "little teenage white chicks have no idea what N.W.A. is" (Let me help) and that there is no Forever 21 anywhere near Compton. The retailer soon deleted the tweet -- and, apparently, the images themselves -- from its website.

But while its Compton-themed merch has quietly disappeared, Forever 21 – no stranger to grabbing other cultures for its Caucasian consumers -- still has plenty of gear for the white girl who wants to go a little old school. Here's a dewy blonde in a Wu Tang crop top. Here's another in a Biggie vs. Tupac muscle tee! Did you know they were both shot to death, six months apart? It was awesome, you guys. Perhaps, to go all twinsies, your boyfriend would enjoy a Biggie King Of NYC Pullover Sweatshirt from Urban Outfitters. Maybe later you two can put on matching shirts and go Fight the Power. Then again, maybe you'll just hit the food court, have some Auntie Anne's pretzels, and then head over to Spencer's to "Show that you're a super-fan with this Tupac 'Me Against World' Junior Fitted Tee" or a Lil' Wayne braided V-neck.

No one would be narrow enough to suggest that a person's musical and sartorial choices must be limited to his or her own race. Most of us can accommodate very diverse pleasures. Also, let it never, ever be said that Joseph Gordon-Levitt does not have a very real and abiding affinity for the work of Nicki Minaj, or, conversely, that Questlove does not rock the hell out of a Hall & Oates T-shirt. But what's ridiculous is when retailers are not, in fact, reflecting a broad spectrum of interests but peddling a specifically OG imagery and doing it almost exclusively on white bodies. Look at the models on Urban Outfitters and Spencer's  and Forever 21. You'll find hundreds of graphic tees celebrating musical artists of color, on almost no men and women of color.

We have reached a point in time where the self-aware white person being simultaneously embracing of yet plenty awkward at hip-hop culture is a thing. So we get it, chicks from the suburbs, you didn't choose the thug life, the thug life chose you. But as Lindy West pointed out last year in Jezebel, hipster racism is still racism. And doesn't it bother you even a little that these big chain stores selling all those Biggie and Tupac and Cypress Hill and ODB and Tribe Called Quest and not even employing non-white models? Doesn't that make your penchant for irony seem petty and insulting? Because it is. And if you don't know, now you know.