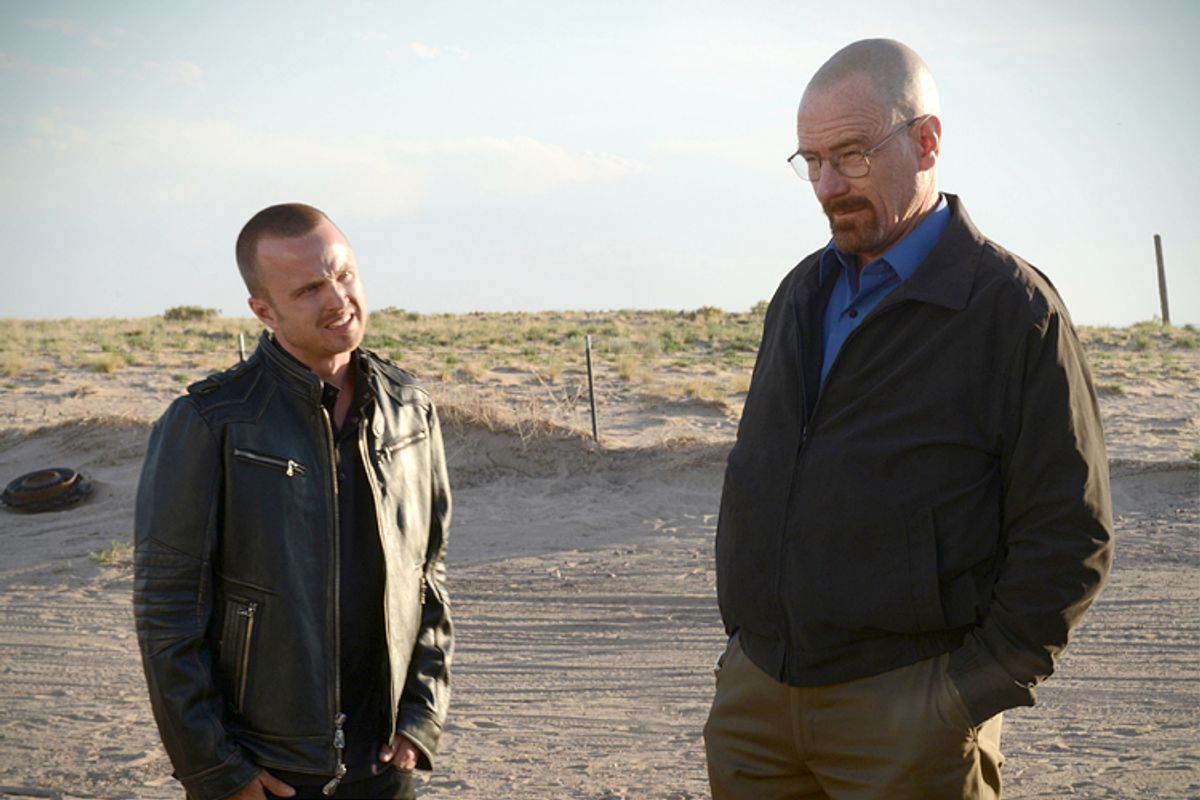 I'm not easily starstruck. I've met and/or interviewed a fair number of celebrities and creatives over the course of my career(s). Still, I recall being at a bar in Los Angeles a couple of years ago, sitting a few feet across from Vince Gilligan and being completely paralyzed, so in awe was I of his immense talent and sweeping yet cohesive vision. I tried to think of a good way to begin talking to him about his -- yuck! -- craft, but all I could think of at the time was something like, "How do you write like ... that?"

I've heard some call "Breaking Bad" the greatest television drama ever. Obviously, that's a really big category. But in my estimation, the saga of Walter White is rivaled only by "The Wire." And like so many other fans who've been enthralled for six seasons, I am eager to see how Gilligan has chosen to end his master work. That said, my fervor for the series finale was greatly diminished by the death of devoted husband and sub-par DEA agent Hank Schrader. And here's exactly why:

Due to his untimely demise, it seems likely that Hank will neither apprehend nor kill his brother-in-law, Walt.

Don't misunderstand me. I am in no way predicting that Walter White will walk away unscathed after having built a drug empire on top of such a healthy body count. In fact, all signs -- including cancer (Get it?!) -- seem to point to the bespectacled meth kingpin going down hard. I'm just saying: Whether or not the dude ends up having to pay the piper, it won't be Hank that makes the collection. And that bums me out a little.

Long before the "Leaves of Grass" deduction sent wisps of steam issuing from the Sherlock Hank's ears, I'd become devoutly -- perhaps even romantically -- attached to the notion that the big man would ultimately be the one to toss the proverbial net over Heisenberg's pork pie hat. It's not because I'm particularly pro-Hank. Honestly, I barely have any memories of Hank from the earliest seasons. To me, he immediately seemed a dolt, a clown, a bumbling reminder of the failings of the ongoing war against drugs. He was Moe -- nay, Shemp! -- Howard with a badge and a DEA windbreaker.

But as Hank gradually began a loose orbit around a clue, I quickly fell in love with the symmetry of the scenario. It just clicked. For years, we'd been watching slow, simultaneous origin stories: the rise of an evil genius underscored by the slightly less compelling emergence of the superhero who would eventually immobilize that villain. It was like M. Night Shyamalan's "Unbreakable" -- except longer and better in almost every conceivable way. Maybe, in hindsight, that inevitable conclusion I'd hoped for was too inevitable, too obvious. But, gosh darn, it was poetic.

And, yeah, it was too obvious.

Remember that scene in the season opener where Walt races over to visit Hank in his garage? At this point, Hank knows stuff. Walt thinks he knows what stuff Hank knows. It's wicked tense. They're both on guard. And you think this is going to be the beginning of a long, drawn-out dance. It isn't. Shit hits the fan at light speed and those two mofos come right to Jesus.

On more than enough occasions, Vince Gilligan has demonstrated a knack for zigging when zagging would seem the obvious course. And that's why, despite my disappointment at seeing Hank Schrader unceremoniously plugged by neo-Nazis, a small part of me still holds out hope that something unexpected will happen during Sunday night's finale worthy of the five years I've spent teetering on the edge of my seat.

Maybe Skyler will trap Walt in the car wash and burn it down with both of them inside, leaving Marie to raise baby Holly just like she always wanted. Maybe Flynn Lambert will intercept Walt on the way back from New Hampshire and beat him to death with his crutches. Or Walt will rendezvous for lunch with Todd and Lydia Rodarte-Quayle right before the screen cuts to black à la "The Sopranos." None of these are good suggestions, but they would all be unexpected. What I would not consider unexpected is if Jesse Pinkman, newly escaped from captivity, tracks Walter down somewhere desolate and murders him like some grown-up Arya Stark.

I'm betting a lot of people think that's how this all plays out. And after all the manipulation and destruction that Jesse has suffered at the hands of Walter White, such retribution would certainly be considered just by most people. But I didn't start watching a show about a white, suburban drug dealer to see justice done. I didn't pay this much money for a flatscreen television solely to have it reinforce the same commonly held morality that I can get in any church in America. I'm here to have my brains fried, bro. And to that end, the idea of Pinkman's revenge just doesn't do it for me.

Everyone is making predictions. What do you think is going to happen on "Breaking Bad?" I don't know what's going to happen. All I know is that what I had once hoped would happen definitely ain't gonna happen. Beyond that, I leave it to the mustachioed man at the helm not to let me down. Better yet, shock me, Vince Gilligan. Shock me so that if I ever sit across from you again, I still won't have jack to say.