Buying games is a political act, and gamers need to start voting with their wallets 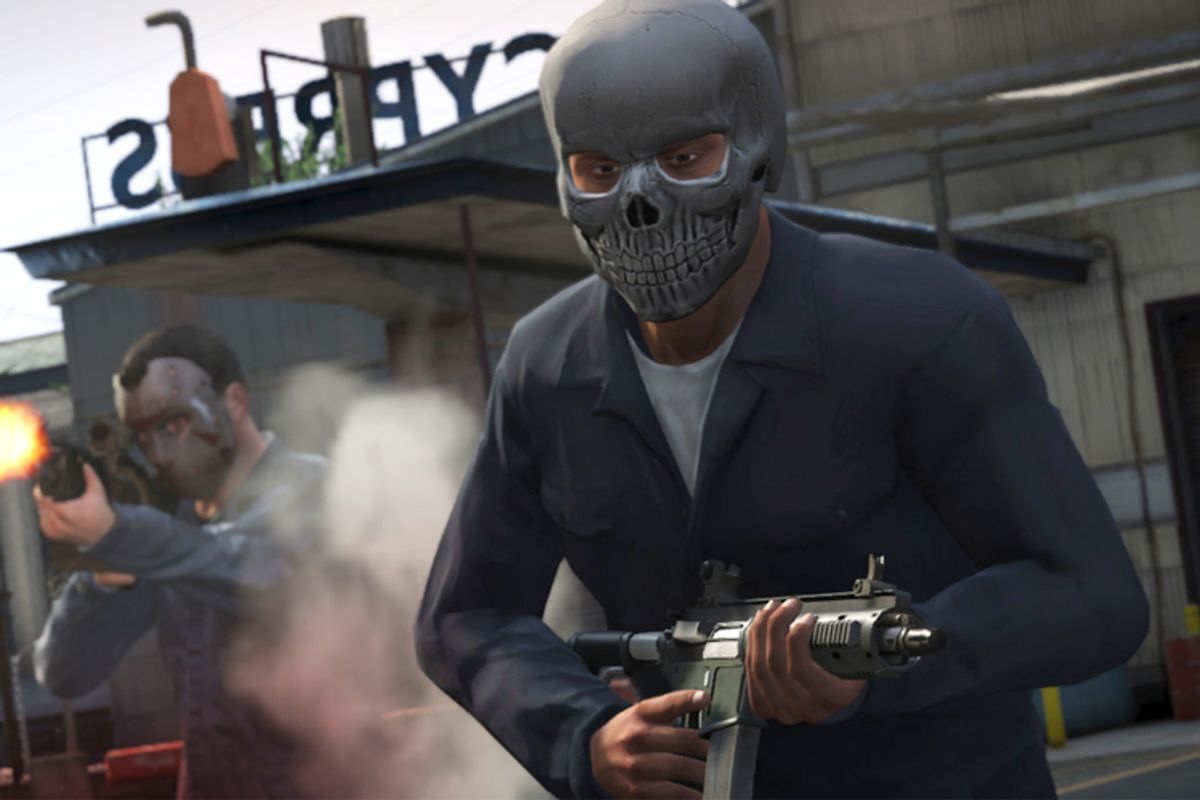 Where previous releases in the "Grand Theft Auto" series have garnered hysterical coverage for the games’ depictions of violence and sex, last week’s release of "GTA V" was actually a more muted media event. The majority of media coverage this time around seemed to focus more on the game as a cultural phenomenon: the midnight queues, histories of the developers, and the fact that, in passing $1 billion in sales in the first three days, it became the biggest entertainment release in history.

To some extent this is a sign of the increasing acceptance of gaming as a mainstream pastime. The principal reason for the controversy surrounding early "GTA" games was arguably not the cartoonish violence depicted – far less graphic than many films – but the prevailing feeling at the time that video games were toys rather than media, and therefore designed for children. With studies showing that the average age of a gamer is now 35 and rising, it is perhaps not surprising that the video game violence debate has started to ebb.

At the height of the row, battle lines were drawn between Mary Whitehouse-style media moralists such as Jack Thompson on one side and gamers defending their pastime on the other, and the focus was almost entirely on the relationship between video game violence and violent crime in the real world. Some commentators worried that enacting murders and assaults in virtual worlds would somehow prime people, especially impressionable youngsters, to replicate them in real life. They drew links between real events and games, citing the Columbine murderers’ apparent obsession with "Doom." Gamers in turn argued that such associations were causally dubious at best, given that the vast majority of gamers lived peaceful lives, clearly un-brainwashed by their games. They also pointed out that, since violent games were age-restricted for adults only, it was surely the responsibility of parents to ensure children didn’t get to play them. With that, discussion began to fade.

Unsurprisingly, this discussion largely missed the point, and it is perhaps worth reopening the debate with a different set of questions. First, the lack of a causal link between video game violence and individual acts of actual brutality does not mean that the two are entirely unrelated on a wider scale. Actual violence is multi-causal – a process of both nature and environment. As with any action, a person’s propensity to aggress is determined by the interaction between the biology of their brain with the wider world – their upbringing, peers, culture and the media they consume.

Though video games alone are therefore neither necessary nor sufficient to cause violence, they can be part of the wider exposure which may increase propensity toward violence. Gaming defenders often counter that consumers are sophisticated enough to understand the difference between real life and games, and are therefore not likely to be taken in and affected by them. This is overwhelmingly true, and individual game-to-crime correlation is therefore pointless. Nevertheless, video games should be seen as an at least equal part of the discussion of the impact of violent media on individual socialization and aggregate societal violence.

This feeds into the second issue, that of the social acceptability of violence in interactive entertainment. Despite being a relatively avid gamer, I have never played one of video gaming’s largest franchises, the "Call of Duty: Modern Warfare" series. These games, for the uninitiated, are first-person shooters depicting (largely) American soldiers shooting foreign people in other countries. Given the wars of the past decade, the idea of being in control of those soldiers, or virtually taking part in a depiction of war in real places which painted conflict as a simple "good guys versus bad guys" affair, made me uncomfortable enough not to make the purchase. Supporting entertainment with our money and patronage is a political act, and gaming is no different than other media types in this respect.

Back to "GTA V," and the controversy regarding its player-controlled torture scene. Seeing torture in entertainment media is nothing new, but as the discussion around "Zero Dark Thirty" demonstrates, we are sensitive to how it is depicted. Those claiming to be satirizing, as "GTA V" does, therefore need to be careful that the satirical message is clear. This is especially true for games, due to their main distinguishing feature from other media: control and participation. It is possible to watch a film depicting even glorified violence and, through the distance from the protagonist one has as a viewer, be able to enjoy some aspects but critique others. But when we as gamers are forced to take part in things we disagree with to fit a character’s narrative, as in the case of "GTA V’s" torture scene, that distance is gone.

Here I have to make the classical confession of commentators on media. I have not yet played "GTA V" or the scene in question, partly because I have not yet decided whether I want to endorse the game by paying for it. Others may have no problem doing so, and may think my reticence prudish, but an increasing number of people are now reporting similar discomfort. The old controversy over pixelated blood and dismemberment in 1990s shooters looks silly when compared to modern games, which pride themselves on the fidelity of their graphics, animation and, increasingly, emotional expression of characters. Perhaps the increasing disquiet I feel at partaking in video game violence is a result of the growing empathy inherent in having to kill and maim more and more realistic virtual humans.

I am certainly not advocating censorship, and the ratings system, so long as parents are informed of its importance, is functional. But there are perhaps two calls to be made. First is an appeal to developers and writers to allow a greater degree of choice regarding violence in games. Games such as "Deus Ex: Human Revolution" are to be applauded for allowing players to complete the game (almost) without killing a soul. Where torture and violence are depicted, the consequences should be genuinely emotional or satirical. Alternatively, we should be given a choice to avoid it as players.

The second appeal is to gamers. We need to start to demand that our pastime reflect our sensibilities. Those of us who would criticize films or television for containing misplaced violence and misogyny, or for having simplistic depictions of good and evil, need to apply the same critical appreciation to video games. Game writing is still relatively immature when compared to film, and is perhaps still trying to appeal to a young male demographic that is decreasingly a true representation of the gaming population. Not keeping up with the maturity shift in the gaming public risks alienating potential buyers and reinforcing the perception of gaming as a pastime for children. Games are no longer simply toys, and are capable of remarkable complexity in storytelling and character development. It is therefore time that mainstream games take responsibility for the messages they convey.