The top dramas on TV are airing their big episodes against one another on Sunday. It'll be fine, trust us 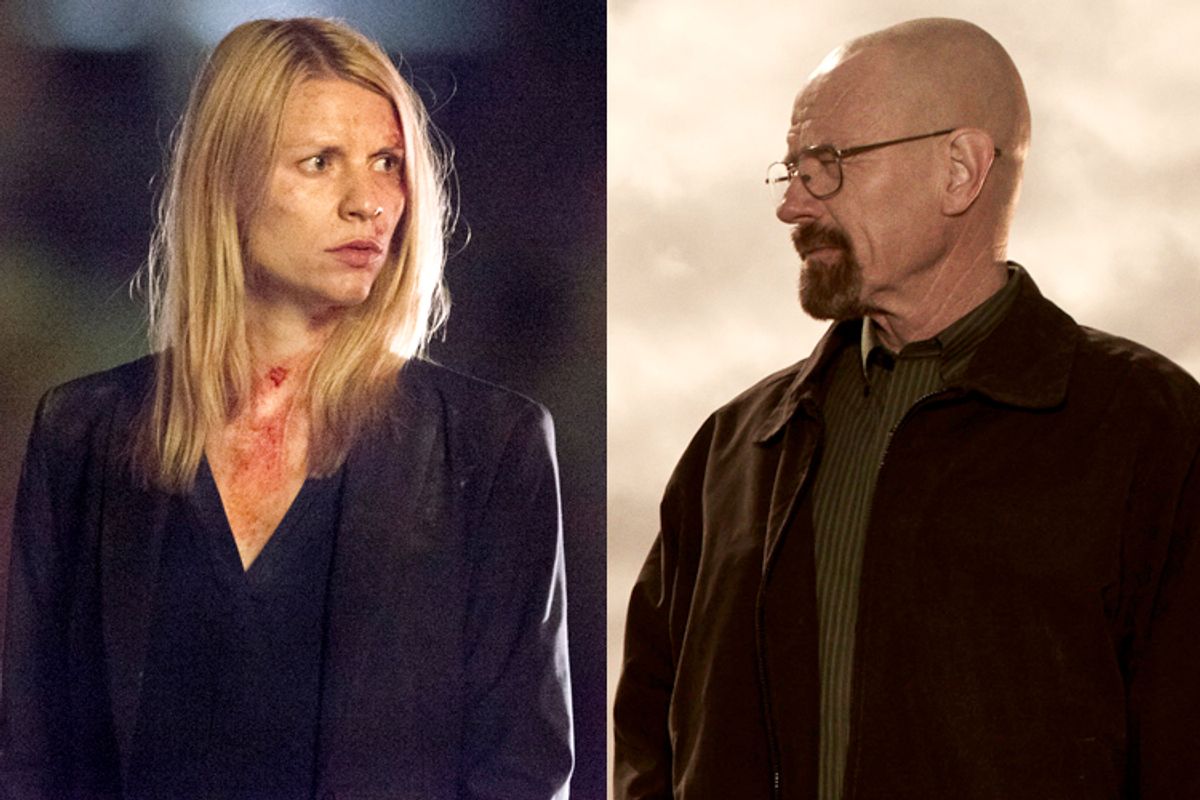 For the second Sunday in a row, "Breaking Bad" is set to beat "Homeland." Last weekend, the meth potboiler defeated the CIA thriller -- the reigning best drama champion -- at the Emmys, as its penultimate episode unspooled and took over the portion of Twitter not caught up in the awards show. And this weekend, on Sunday at 9 p.m. Eastern time, as "Breaking Bad" airs its final episode, "Homeland" is set to kick off its third season.

Pity poor Carrie Mathison, the mentally ill counterterrorism agent at the center of the "Homeland" action. "Breaking Bad" has enjoyed an unprecedented climb in viewership toward the end of its run on AMC, with its season premiere getting 5.9 million viewers, a shockingly high figure for a cable drama. The show will not merely outperform Showtime's "Homeland" (as premium-cable series, "Homeland" is at a disadvantage; last year's season premiere, buoyed by Emmy wins, got 1.7 million viewers, a fraction of "Breaking Bad's" current viewership on basic cable); it's almost certain to outperform it on social media, as well. As the finale of one of the most acclaimed and confident series of all time airs, is it likely that anyone but contrarians will be tweeting about "Homeland," a show whose last season was, well, uneven?

The Showtime decision to launch its fall season -- it's not just "Homeland" but the new show "Masters of Sex" starting Sunday -- has something to do with math. The 12-episode "Homeland" season is set to end on Dec. 15, 2013; a week earlier, and "Homeland" would have launched against the Emmys. A week later, and it's wrapping up in the holiday-season dead zone. The series has always launched its run the weekend after the last full week in September and has thus far been rewarded for this timing.

This situation calls to mind just how packed the calendar is. Cable series generally operate in a predictable manner; "Homeland," with "Boardwalk Empire," starts in the fall; "Mad Men" (since its long hiatus in the year 2011) and "Game of Thrones" in the spring, "The Newsroom" and "True Blood" in the summer. Every show, even non-cable prestige dramas ("Downton Abbey" decorously begins each season in January) has its space. "Breaking Bad" has careened across this schedule, starting its six runs of episodes in January 2008, March 2009, March 2010, July 2011, July 2012 and August 2013. A collision with another big TV event was, if not inevitable, likelier than for more consistently scheduled series. (And the rest of TV doesn't follow cable's decorum, anyway -- the "Homeland" fans who like Sunday night football are already catching Carrie's exploits on DVR or streaming.)

But it isn't merely the quantity of series that makes this era notable -- it's the quantity of viewing options. In the sense that "Breaking Bad" ending draws attention to Sunday-night serious dramas, there may be a rising tide when all is said and done, not least because the lead-out programming for "Bad" is the silly chat show "Talking Bad," and viewers may want to catch up on their DVRs. Showtime, a premium-cable network like HBO, does not see its fortunes rise or fall on viewership for individual episodes; the calculus would be far different were the situations reversed and AMC, which airs ads, the one at a disadvantage. Showtime's now in the conversation, at least, on a night when AMC ought to be the sole thing anyone's thinking about -- the mere fact that "Homeland" will be on viewers' minds during the "Breaking Bad" finale is a victory for a network that gets 11 more episodes in the season, and potentially many more seasons to come. And besides, if the ratings for the third season are lower than they were last year, when the show was buoyed by Emmy wins, a network that doesn't care anyway gets a very plausible excuse.

Putting forth its marquee drama on a night when the majority of cable drama fans will be tuned to another network isn't necessarily a problem for Showtime -- not least when Showtime streams its programming online for subscribers through the Showtime Anytime platform. The mere fact that the two are paired together is a compliment to "Homeland" -- if people are tweeting about missing it for "Breaking Bad," they're putting the two in the same breath, a conversation HBO's "Hello Ladies," launching that night, won't likely be able to break into. "Breaking Bad" gets Sunday night -- but "Homeland" will live to see another day.