GOP insists that insane funding plan be even crazier

Republicans want to hold nation's finances hostage for a bag of GOP goodies. A key faction says that's not enough 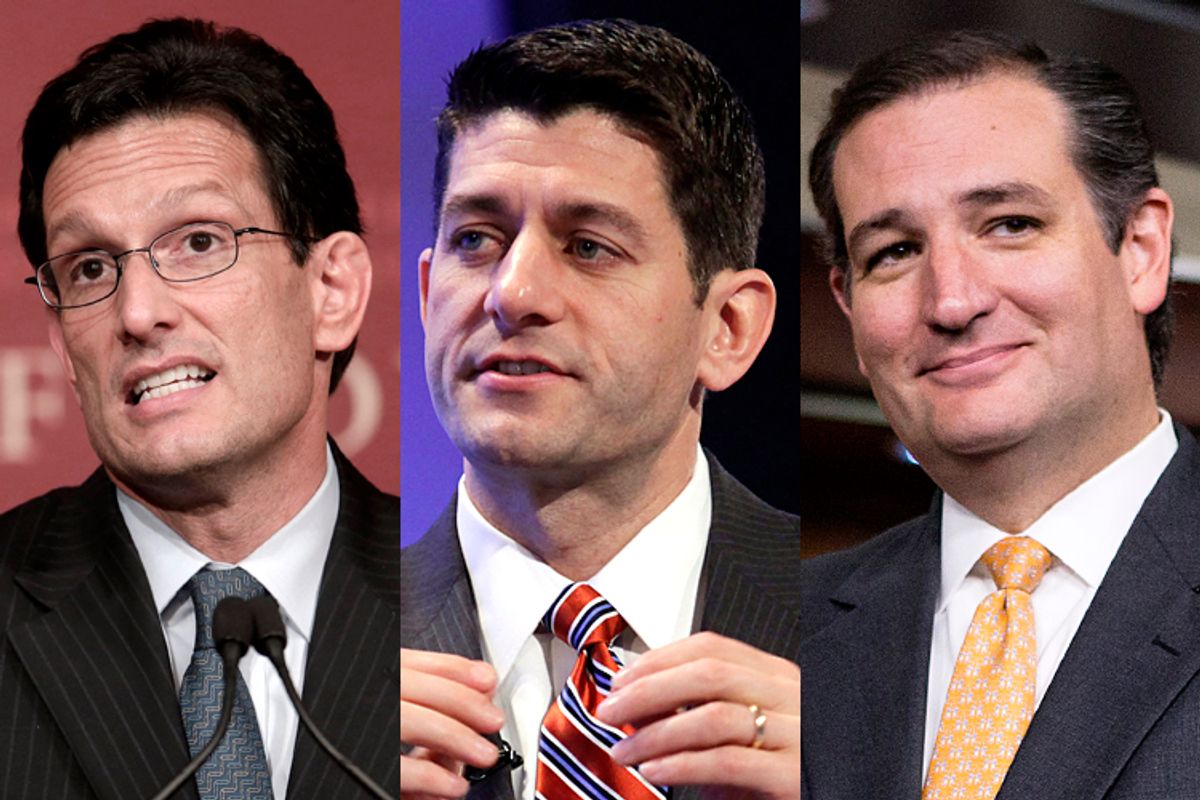 The House Republican position is that the debt ceiling -- a threat to wreak economic havoc -- is a legitimate bargaining chip in budget negotiations.

Party leaders at least understand that the debt ceiling must and will be increased, but hope to use the threat of defaulting on the national debt to extract some relatively modest concessions, if possible.

But some number of House Republicans -- it's unclear how many, but probably around 40 -- don't see it that way. They believe the debt limit -- a statutory anomaly that should be abolished -- should serve as a sort of tie-breaker in divided government that allows the legislature, or even one branch of it, to turn the presidency into an office of nominal leadership. To turn the president into a figurehead who has no choice but to accede to the legislative wishes of the party he or she defeated in the general election.

Why am I so confident they actually believe this?

Because they took a look at the outrageous list of demands the GOP leadership attached to the party's debt limit increase proposal and said, "not good enough."

Late Thursday afternoon, House GOP leaders acknowledged that their debt limit bill, which they haven't even released yet, lacks the votes to pass. “We still have some challenges,” said Rep. Tom Cole R-Okla, a deputy whip and a John Boehner ally, according to The Hill. “We’ve got an awful lot of support, but clearly at this point we don’t have a final product that’s attracting the number that we need. Hopefully that’ll change, and I think it could.”

The House proposal (at least as originally conceived) is a grab bag of GOP goodies, most of which were bullet points in Mitt Romney's presidential campaign platform. But it lacks the most controversial elements of the GOP agenda -- Medicare privatization, Medicaid devolution -- and as such doesn't cut enough spending for some of the most hardline conservatives in the House Republican conference. It also doesn't include any abortion restrictions.

As such, Boehner and his leadership team can't whip up 217 Republicans (the current threshold for passage) to back it, and since zero Democrats will support their crazy plan, it's dead. At least as currently written.

Now I obviously think this whole approach is nuts. But at least in its current form you can construe the plan as a weird starting point from which Republicans will ultimately begin dialing back demands and, in the end, come up empty handed, or at most with minor concessions, in exchange for increasing the debt limit.

But for those 20, 40, 60, however many Republicans, this isn't how the debt limit should be wielded. The demand should be the totality of the party platform, with no room for negotiation. Or at the very least the party shouldn't signal willingness to negotiate by leaving major priorities off the table at the outset.

When your House majority is 233 members, 20 is enough to threaten your Speakership. As such, instead of telling the hardliners to take a hike, GOP leaders are going to negotiate with them, in the hope of altering the debt limit plan in a way that achieves a Republican-only majority for passage. As loudly as they're insisting that President Obama should negotiate with him, they don't have a workable position of their own from which to negotiate. They could quite easily if they were willing to work with Democrats. But John Boehner isn't ready to lead yet.

Does that mean we're doomed to default on the debt? I don't think so. Boehner might not be ready to lead, but he's also not ready to destroy the economy. The middle way between those two seemingly incompatible "priorities" is to "fight" to the bitter end, but accede to reality at the last possible minute.

That's what he's doing right now in the ongoing effort to fund the government, which is set to shut down at the end of Monday. It's a performance he'll likely repeat over the next three weeks ahead of the debt limit deadline. Unless he can't appease the hardliners enough to pass a crazy GOP debt limit bill. In that case, he'll have to go hat in hand to Democrats for help directly -- a recognition that he doesn't even have the semblance of a governing majority, and that his hardliners are more or less done with him.

Maybe then he'll accept reality and pick the "leadership" option.