What women will do for a ring

A writer goes viral for trading sandwiches for a proposal, but she isn't alone in bargaining for a man's commitment 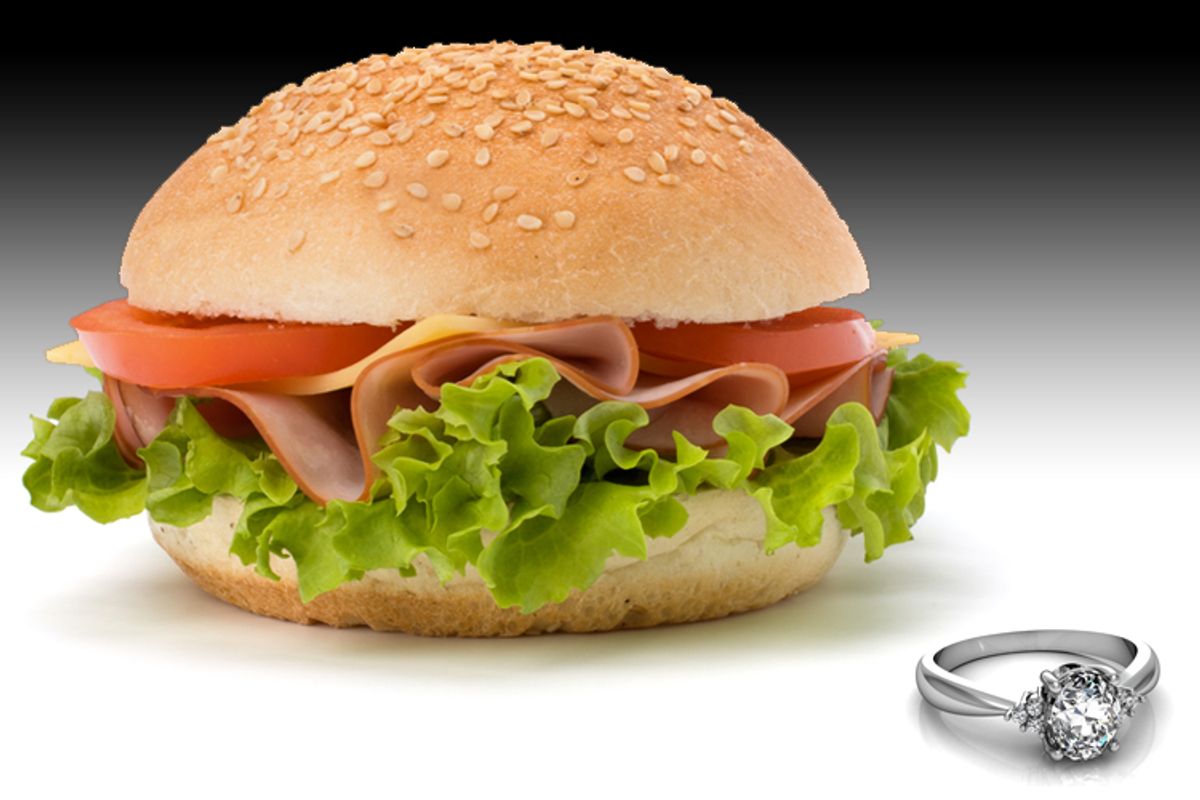 When Stephanie Smith made her boyfriend a sandwich, he didn't quite get down on one knee, but he did tell her, "Honey, you're 300 sandwiches away from an engagement ring!" Which is to say: He basically told her that he was still years away from maybe-possibly proposing to her. So, Smith bought the domain 300sandwiches.com and turned her pursuit of marriage via deli meats and sliced bread into a social media project. When she outed herself this week in the New York Post as the woman behind the buzzy blog, she and her sammies went viral. Before long, she was on the "Today" show.

Smith isn't as unusual as she might sound. She's just an extreme and especially media-savvy version of an exceedingly common species: women who plot to get their boyfriend to propose -- be it through sandwiches, sex or an ultimatum.

Case in point: The legend of "Engagement Chicken." It originated at Glamour, where the recipe spread internally among the staff and was followed by three engagements. It was then published in the magazine in 2004 and has allegedly inspired a slew of readers' engagements, including that of Beth Ostrosky to Howard Stern, a notorious ladies' man -- or dipshit, depending on one's perspective. (When Stern described on-air the amazing dinner his girlfriend had made the night before, a listener recognized it as the "Engagement Chicken" recipe and Ostrosky's scheme was outed.) One woman, Lindsey Unterberger, actually started a blog, Engagement Chick, to document her attempt to use the chicken to get her guy to propose.

There is no shortage of advice suggesting that the route to a ring is through a man's stomach. Michele, one of the proposal planners -- this is a job that exists in the world! -- at the Heart Bandits suggests on her blog that women in want of a proposal should get domestic: "Cook him a nice meal and iron his shirts every now and then. Don’t go overboard, just let him see what is in store if he marries you!" (This worked for me with my now-fiancé! I showed him just how little he could look forward to my cooking -- and we're getting married anyway.)

The engagement plots are hardly restricted to the kitchen. In a post titled "5 Ways to Get a Proposal Faster" Meredith Bodgas writes that one of her successful strategies to get her now-husband Paul to propose was to present him with the golden opportunity to pop the question: She planned a proposal-perfect getaway to Paris. "While I couldn't guarantee Paul would propose while we were there," she writes, "he seized the opportunity." (She also tried issuing an ultimatum, but says it didn't work.)

There is a whole world of women who gather online to talk about their attempts to solicit a proposal through various means and schemes.

On Weddingbee.com, there's an entire section devoted to "waiting." Soon2BeMrsC writes that she and her boyfriend of three years were getting nowhere with the engagement talk. "We'd end up fighting and not getting any closer to what I wanted," she said. So, without telling him, she set a deadline for him to propose and decided to play hard-to-get. She started focusing on studying, work and friends. "I just moved on with my life with no consideration for whether he was going to be a part of it," she writes.

She began the "plan" in March and got her proposal in May. "I think once he realized that I was perfectly capable of carrying on without him, he decided he better hurry up and figure out whether he was coming along with me or not," she says.

Plenty of other women vouch for the silent treatment. Pinky 44 writes, "While I never quite became a nagger, I did start mentioning getting married more often, which sent my man into a bit of a commitment-phobe phase," she says. "I COMPLETELY backed off and just kept it in my head that I would not ever mention marriage again until he did, and just a few months later he was suddenly all about it." On these message boards, men are routinely portrayed as confused and easily agitated creatures who just need to be tricked into realizing what they want.

Weekly threads on the message board offer support for women who take the "shut-it-up pact," in which users attempt to "keep their mouth shut and not mention anything ring/engagement/wedding/marriage related to their [significant others]." Of course the aim is a ring/engagement/wedding/marriage. As kandykane1 writes, "I'm up to day 31 on my personal SIU pact, so I need to keep with it and keep my mouth shut," she says. "He's been a lot more sweet and a bit mushier recently, so maybe keeping my mouth shut is working. Fingers crossed!"

I don't mean to perpetuate an ugly caricature of women as wedding-obsessed; there are plenty of women who do not care for marriage one bit, or care for it but do not define themselves by it. More to the point, my aim isn't to criticize women who do treat a proposal as something they have to work toward with sandwiches and Engagement Chicken and silence. (OK, maybe just a little bit.) It's to point out that the above are perfectly understandable reactions within the culture in which we live. Can you really blame these women for being driven to such insanities?

Women "land" men. They "snag" them. They "get" a proposal. We talk about heterosexual commitment like it's something a woman procures from a man after much nagging, manipulation and deferential acrobatics -- like a kid talking her way into the cookie jar. Sex is seen as a thing that men want and that women submit to; in the same way, commitment is supposedly something women want and men give in to. This is at the very heart of the alleged battle of the sexes.

Times may be rapidly changing -- and it remains to be seen how, and if, same-sex marriage will change proposal tradition -- but this power dynamic is deeply entrenched. While some non-traditional straight couples reverse the expected roles or mutually propose, as I did with my fiancé, the majority still expect and want the man to propose. A 2010 study found that women frequently "hinted or joked [with their live-in boyfriend] about getting engaged" and that men were very aware of their girlfriend's "desires to expedite a proposal." The researchers concluded that men believe they "control the pace of the relationship progression." They do!

It's the man who decides when to drop to one knee. It's the man who buys the expensive diamond ring. It's the man who holds the reins of the relationship. The woman is left to control the process through indirect means -- hints about the desired ring style, proposal story and time frame. I don't know about you, but that kind of powerlessness would make me act a little cray-cray. Three hundred sandwiches worth of crazy.

The truth is that the hetero male proposal, and its fairy tale charm, comes at a steep price. Sometimes the price is akin to several years worth of sandwiches, sometimes it's your sanity and, often enough, it's a bit of both.