Tom Hanks gives a powerful performance, but this real-life pirate adventure is uncomfortable and unpleasant 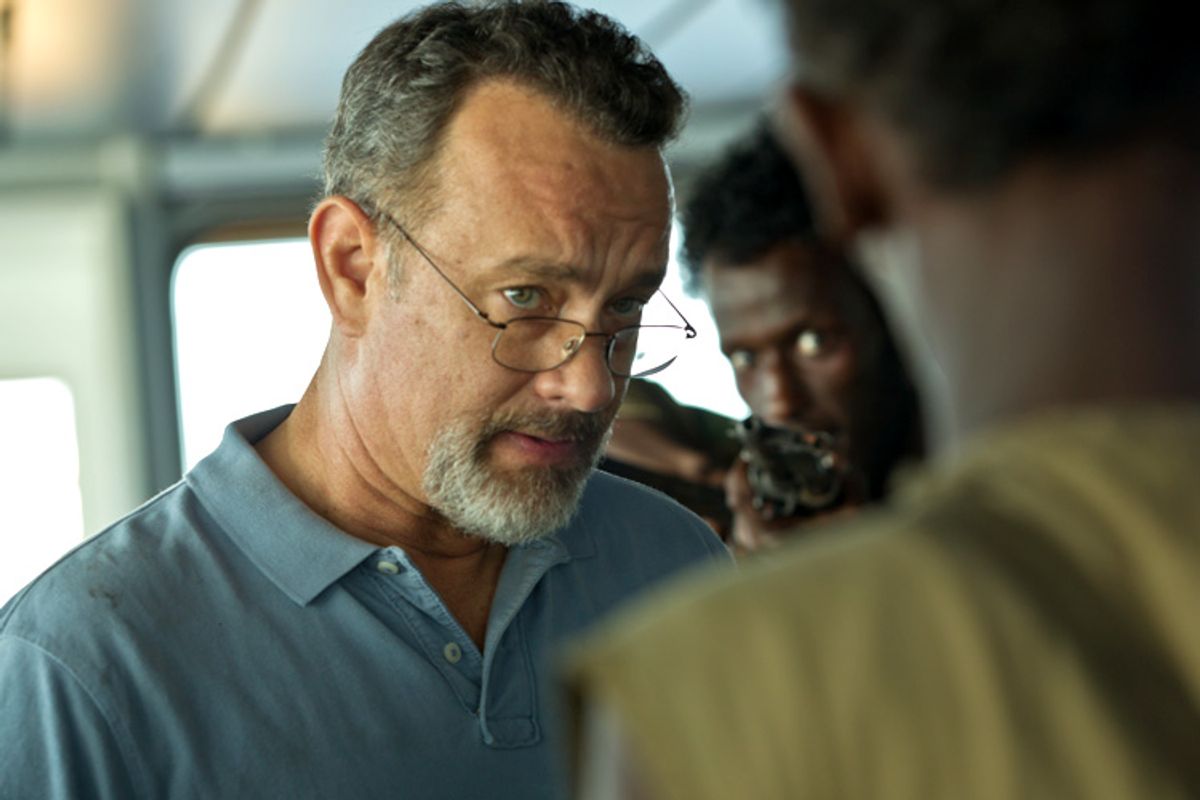 Considered on its most obvious merits, “Captain Phillips” – which opened the New York Film Festival on Friday night -- is an intense and claustrophobic maritime adventure, much of it set not on the open sea but inside a sealed lifeboat that resembles a small submarine, or a floating coffin. It may well earn Tom Hanks the Oscar nomination he’s so clearly striving for, in depicting the almost Christ-like suffering of the eponymous Capt. Rich Phillips, a taciturn New Englander who is taken hostage by Somali pirates after a 2009 hijacking goes awry. But not far below the surface “Captain Phillips” is also an unpleasant and uncomfortable experience, a film that’s not entirely happy with itself.

Director Paul Greengrass, a specialist in political thrillers who made “United 93,” “Bloody Sunday” and the second and third Bourne adventures, has never before made anything this propagandistic or this characterless. His portrayal of the enormous United States military operation to free Phillips from his captors has the calm technological blankness of a Navy commercial, without the 1970s waka-waka guitar. I can’t decide if there’s meant to be anything sardonic about the presentation of the asymmetrical conflict in “Captain Phillips”: Billions of dollars of cutting-edge military hardware and hundreds of corn-fed, gym-toned Americans on one side, four malnourished men with black-market Kalashnikovs on the other. But I kind of think there isn’t.

I’m aware that Billy Ray’s screenplay is based on the memoir by the real-life Richard Phillips, who joined Hanks and Greengrass onstage at Lincoln Center before the film’s world premiere. But what we have here is a movie, not exactly a “true story,” and as cinema it plays a lot like a knockoff of “Zero Dark Thirty,” without the same ambition and scale and with dramatically lower stakes. Instead of a worldwide “terrorist” conspiracy that, at least notionally, advocates violent apocalypse, the boogeymen in “Captain Phillips” are a quartet of impoverished villagers who barely know each other, ordered out to sea in a wooden skiff by the local warlord in search of a quick cash-grab.

Ray and Greengrass include a brief scene on the beach in Somalia, to make clear that the pirates – like Rich Phillips and his crew – are essentially employees in a capitalist enterprise, doing what they’re told. But that isn’t how it plays out on the water, despite the calming assurances of rail-skinny Muse (Barkhad Abdi), captain of this pirate band, that the whole thing is “just business” and nobody will get hurt. I don’t know enough about the social world of Somali piracy to judge whether these four guys were unusually ill-prepared, but it kind of seems that way. I can tell you that the outstanding Danish film “A Hijacking” offers a far more nuanced and textured story about the relationship among the Somali pirates, between the pirates and the hostage crew, and about how the shipping industry deals with this particular hazard.

Without getting into spoiler-land, what seems to have happened in this now-famous 2009 incident was that the Somali guys had eyes bigger than their stomachs, so to speak. They got an eyeful of Phillips’ vessel, the Maersk Alabama, an enormous American container ship loaded with cargo – it was en route from Oman to Mombasa, Kenya – and just couldn’t say no. But the Alabama had a large and well-trained crew who had rehearsed a strategy for resisting pirates. Even after the Somalis successfully board the ship, they never quite gain control of it. Four untrained and anxious dudes, even with automatic weapons, were never likely to win an extended cat-and-mouse game aboard a huge oceangoing vessel they didn’t understand and couldn’t operate.

I suspect this may be part of Greengrass’ design for the film: In a way, the Somalis’ fate was decided as soon as they tried to tackle a U.S.-flag carrier. All the shipping companies were getting tired of paying out millions in ransom to the freelance taxing authorities of Somalia, and were delighted to let the U.S. military take on all the trouble and expense of making an example of this particular band. In “A Hijacking,” on the other hand, there is never any suggestion that the U.S. or any other nation will intervene militarily to rescue a third-rate freighter from an insignificant European country. It’s an arduous and unpleasant negotiation, but always a question of business: How much money will it take, and how much time? When violence occurs in that film, it’s understood by all parties as an unfortunate miscalculation, collateral damage of the business deal.

After an awkward and gratuitous opening scene depicting Phillips at home in Vermont with his wife (a cameo for Catherine Keener), Hanks largely gives a quiet but commanding performance as a man who is used to controlling events and must give that up entirely. Phillips is depicted as a curt, plain-spoken man, a taskmaster who has little emotional connection with his crew but who must suddenly thrust himself into the role of self-sacrificing hero. Again, while I know this movie sticks close to the facts, there’s clearly a metaphorical level to Phillips’ ordeal with the pirates, who end up escaping from the Alabama in one of its lifeboats with him as their prisoner. He survives but at immense cost and seared by trauma, his relationship to life and the world changed in unknowable terms. (In fact, the real Rich Phillips went back to sea a year later.)

There’s a racial or cultural subtext to this film that’s right on the boundary of consciousness, and cannot entirely be ascribed to verisimilitude. Hanks’ Phillips – the only fully realized character in the entire film – remains a calm and rational actor until he is pushed to the limit of human endurance. The Navy officers, SEAL team members and other military personnel are competent, emotionless automata, seen mostly in shadows or illuminated by their electronic gizmos. But the Somalis behave like unmedicated hyperactive children with guns – they’re wild-eyed and hot-tempered, vacillating from murderous rage to companionable good humor and back again every few seconds. “Captain Phillips” is less an adventure yarn about the daring rescue of a captured American than a celebration of a huge and expensive machine that crushes disorder.