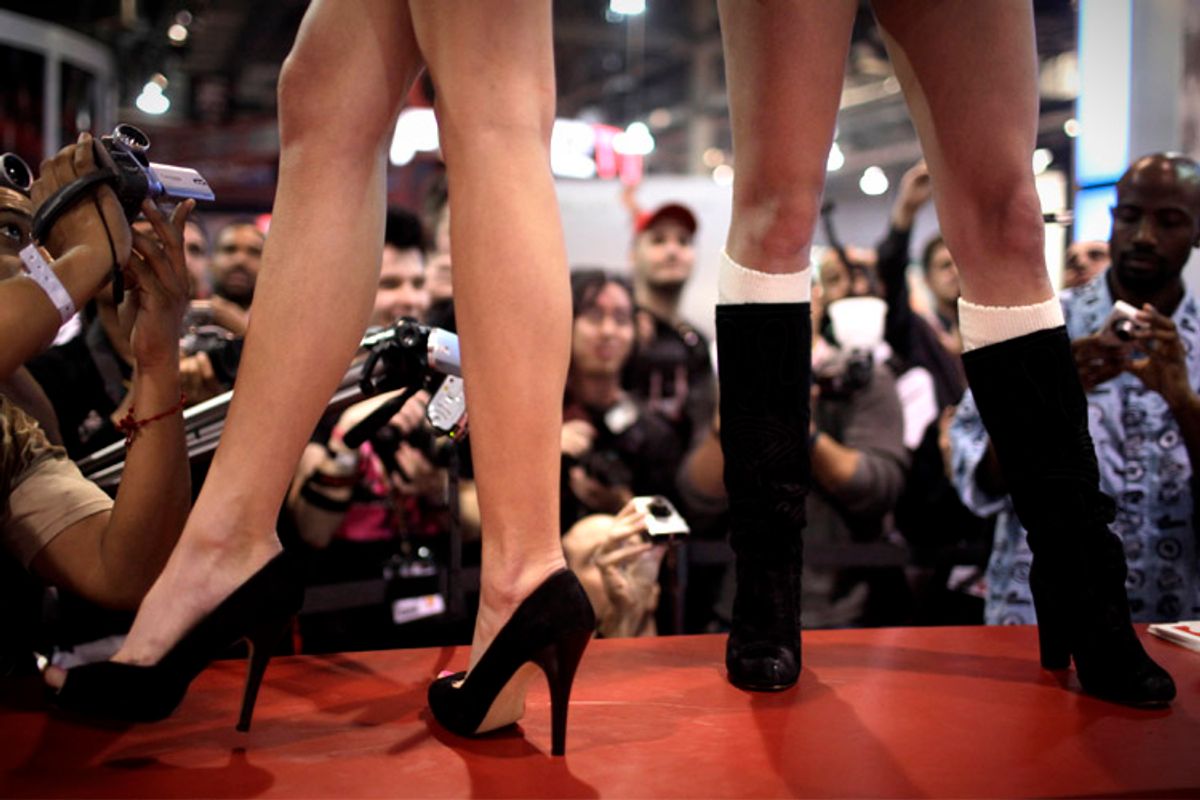 When Gauge retired from the adult industry in 2005, she had big plans for her post-porn career. A 4-foot-11 Arkansas native best known her signature move — receiving anal sex while doing a handstand — Gauge abruptly left the industry after shooting more than 140 films, due to a contract dispute with her management company. Although she enjoyed her four-year stint in front of the camera, she wanted to take time off to prove to herself that she could succeed in other avenues. “Some girls enter the business without a long-term plan, or maybe they think they can’t do anything else,” she says. “I was never like that. I always thought I could do anything."

After a few years of saving money through feature dancing, Gauge went to school to get her certification as a surgical tech, reaching the top of her class and logging double her required hours in the process. Then an anesthesia tech recognized her, and word spread through the hospital staff that a porn star was among their ranks. “Everybody wanted me in their room, but they started treating me like shit,” Gauge says. “They made me feel like I was contaminating everything.” By the time she was set to graduate, no one at the hospital would sign off on her required hours.

“I ended up just getting so fed up with the way I was being treated,” she told me the week after she announced her comeback. “I have a family now, and if I’ve exhausted all my avenues and the only thing left is the adult industry, then I’m just like, well, look, I’ve tried this and I’ve tried that, year after year after year. It’s 2013. I’ve been going to school since 2007 … what else am I supposed to do?”

Gauge’s post-porn trajectory is far from unusual. The adult industry has, for lack of a better term, a particularly high recidivism rate, especially for performers who have achieved a certain level of name recognition. Whether they, like Gauge, continue to perform on the feature-dancing circuit, or are as financially shrewd as Jenna Jameson, who used her performance earnings to start her own multimillion-dollar production company, performers can stay in the industry for years, regardless of whether they’re still in front of the camera.

For actors still at peak performing age, as Gauge was when she retired, there are many reasons why one would be attracted to the industry: money, notoriety, moderately flexible working hours. Yet those who are looking to transition into a 9-to-5 desk job will most likely find themselves blocked at every turn. “At every job you apply for you will either have to disclose your background, and chance not even getting a shot at an interview, or hide your past and prove yourself, hoping when the truth comes out you will be kept on,” says Cindi Loftus, the editor of porn website Luke Is Back and a 20-year industry vet.

Thanks to the widespread availability of porn clips on streaming websites like PornTube and Tube8, it’s become increasingly difficult for former adult stars to conceal their past from their employers. Stacie Halas, an Oxnard, Calif., middle school teacher who went by the professional name of Tiffany Six, is the most recent example of this phenomenon. A science teacher at Haydock Intermediate School, Halas was fired after students found one of her videos on the Internet. When she fought her termination in court, her appeal was denied by a three-judge panel, one of whom wrote in a 46-page statement that “the ongoing availability of her pornographic materials on the Internet will continue to impede [Halas] from being an effective teacher and respected colleague.”

Employment prospects for former adult performers are not much better outside the school system: The adult film star Houston, nee Kimberly Halsey, was let go from her real estate job of five years under similar circumstances, after a co-worker recognized her. “I was a new homes salesperson, and they had me in two communities, and I was working my ass off,” says Houston, who recently wrote a memoir, "Pretty Enough: The Story of a Gang-Bang Queen." “I had dyed my hair dark, I had gained weight, and I didn’t really look like Houston anymore … I was always incognito and always trying to hide, like I still do today.”

Now that it has become less feasible to make a living as an adult performer, some believe the onus is on agents, managers and production companies (most of which do not even offer their performers health insurance) to help ease their performers’ transition back into the mainstream by teaching them valuable work skills, or showing them how to manage their finances so they can accrue a substantial nest egg before retirement. “It seems to me the closest bonds these girls have are with these agents/managers,” "After Porn Ends" director Wagoner says. “I’d think if the agents/managers wanted to protect their investment, they would do something like that.”

After eight years of being tossed around by the mainstream working world, however, Gauge doesn’t think the industry can do much to improve employers’ views of those in her field. It’s the culture that loves Ron Jeremy and shames the women paid to have sex with him on-screen, that penalizes the girl on-screen and not the anesthesia tech who jerks off to her, that ultimately needs to change the most.