Hey Wal-Mart, pay for your own recycling!

Why should taxpayers foot the bill for major corporations' increasingly wasteful use of plastics? 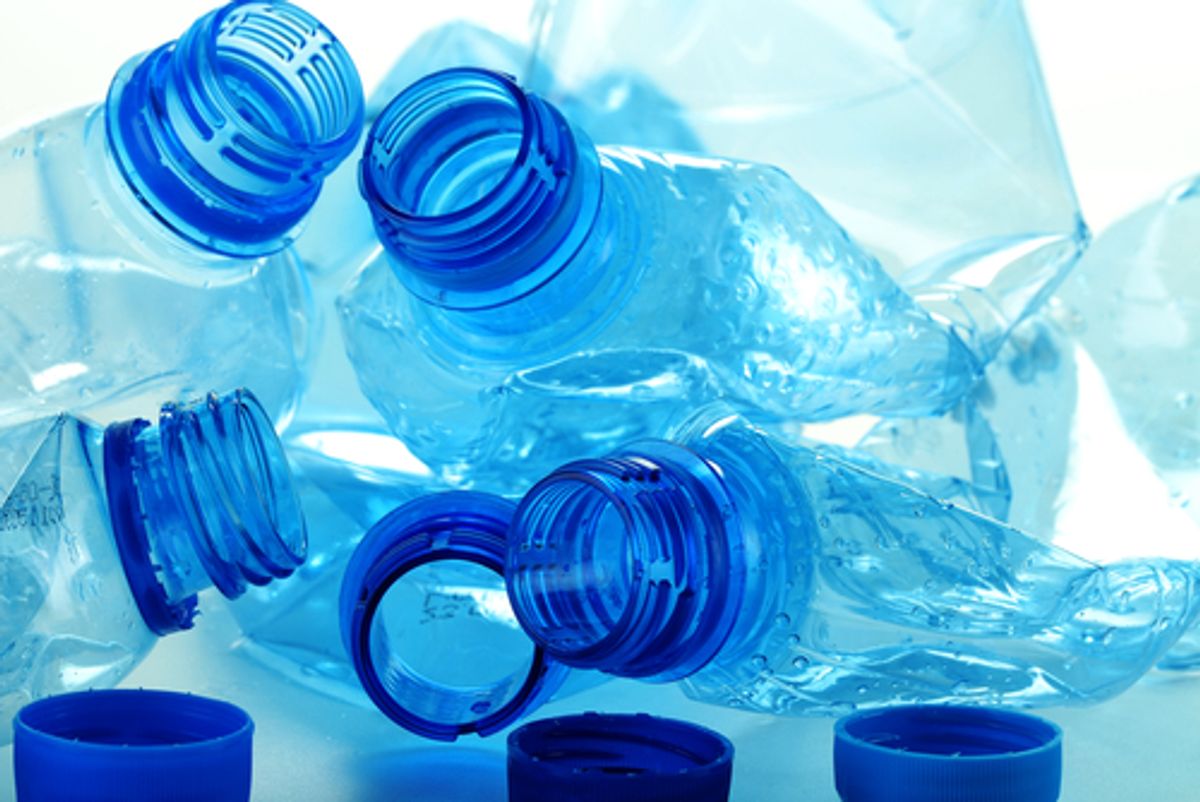 Over the past 11 years, Mayor Michael Bloomberg has helped plant hundreds of thousands of trees in New York City, reduced indoor air pollution by banning smoking in restaurants and bars, and created more than 350 miles of bike lanes in the five boroughs—all boons to the environment. But he’s never done all that much to reduce the quantity of waste that the city sends to landfills. Until this past spring, that is, when the outgoing mayor (he steps down on January 1) announced a major expansion of the types of plastics New Yorkers can toss into their recycling bins. Yesterday it was only narrow-necked bottles; today it’s any rigid plastics, including clamshell-type containers, clothes hangers, even toys. Hallelujah.

Compared with other American metropolises, New York’s recycling rate has been pretty anemic. At last check, the city was recovering only 15 percent of all the potentially recyclable material in its waste stream; the national average is 34.7 percent. That’s why so many of us were pleased by the mayor’s announcement. With a stroke of the pen, Bloomberg assured that an additional 50,000 tons of plastics would be delivered to recycling companies annually. Moreover, the simplicity of the city’s larger recycling message—“Just throw everything into the bin”—seemed likely to foster a greater degree of compliance, netting plastics processors even more of the materials they covet most: those narrow-necked bottles that are typically made of polyethylene terephthalate (PET) or high-density polyethylene (HDPE).

But then my not-so-inner skeptic started to pipe up. Wasn’t it possible, I wondered, that this expansion would encourage even more consumption of single-use throwaway plastics? Would consumers who might once have felt a guilty pang when tipping their takeout containers into the trash now feel that by recycling those containers, they were somehow solving our plastics problem? Plastic, after all, is made out of nonrenewable resources—oil and natural gas—extracted at high cost to human and environmental health. Globally, the plastics packaging industry grew an average of 7.2 percent a year between 2001 and 2010, with most of that growth taking place in developing nations.

It all leads to a question that doesn’t get asked enough: who should be responsible for what happens to consumer products and packaging when we’re through with them? For the most part, our current system lets the producers of single-use plastics off the hook, allowing companies to offload costs related to the disposal of ever more waste—from sticky Frappuccino lids to salad bar boxes and single-use water bottles—onto taxpayers, who pay for their collection and transfer to recycling facilities. Or, increasingly, to landfills, in the event that these materials fail to find an end market. (China, which has been buying about 50 percent of our exported recyclables, has begun turning away loads of them because they’re contaminated with food or other garbage, or mixed with non-recyclable plastics.)

But things may be changing. Recently, more and more states, cities, and concerned individuals have begun demanding that the producers of consumer goods take greater responsibility for their products at the end of their useful lives. Proponents of the strategy known as Extended Producer Responsibility (EPR) press governments to shift the costs of collecting and recycling products and packaging onto those who generated them in the first place. Under an EPR framework, manufacturers and brand owners finance the collection and recycling or disposal of packaging materials, hazardous landfill items (such as mercury-containing compact fluorescent bulbs and thermometers), and hard-to-recycle goods like mattresses.

Won’t these fees be folded directly into consumer price tags? They might. But that’s actually the beauty of the EPR system: it sends a clear economic signal to both companies and consumers regarding a product’s true price—that is, the price that accurately reflects end-of-life disposal or recycling costs. By shining a light on so-called disruptive products or practices, the system encourages brand owners and manufacturers to come up with safer, more efficient, and more cost-effective solutions. When EPR works as it’s supposed to, consumers end up with less packaging—or, at the very least, with packaging that’s easier to reuse, recycle, or compost.

As it happens, Ron Gonen, New York City’s deputy commissioner of sanitation, recycling, and sustainability, is already in discussions with major brand owners—including Walmart—about implementing EPR in America’s biggest city. “We need to make companies understand that it will no longer be acceptable to sell something in our market if we have to pay to dispose of it at the end of its life cycle,” he told me recently. “Companies should be responsible for ensuring that any packaging or product they put into the market can be recycled, and that there’s a market for it as well.”

And if companies don’t step up? “Government is going to look to legislate,” Gonen said. “It’s not fair for taxpayers to pick up the cost of a product that was poorly designed.” New York’s neighbor to the northeast, the state of Connecticut, recently passed legislation that requires mattress makers to pay for the collection of discarded mattresses and their delivery to recycling facilities. The program is expected to keep 175,000 mattresses a year out of landfills and incinerators, conserve resources (the fibers, woods, and metal springs can all be reused), boost local industries that build re-use into their business models, and save the state up to $1.3 million a year.

Next year, lawmakers in Rhode Island will have an opportunity to pass a law that would require producers to pay for the post-consumer collection and processing of any plastics or packaging they introduce into the marketplace. Allen Hershkowitz, the NRDC senior scientist who helped develop the basic framework for this concept 20 years ago, is leading the initiative to reduce the Ocean State’s marine pollution, decrease inflow to its lone landfill, and save its cash-starved municipalities tens of millions of dollars a year. By bringing together legislators, city managers, environmental groups, and concerned citizens, Hershkowitz says, the proposed legislation has the potential to turn “the smallest state in the nation into a model for all the others.”

But governments can’t go it alone. The paradigm won’t shift without the added energies of the companies that manufacture these goods, as well as the retailers that sell them and the facilities that ultimately sort them for recycling. And then there’s what may be the most important link of all: forward-thinking inventors who are designing products and packaging with the environment in mind.

Aaron Mickelson is one of them. Mickelson was a graduate student in industrial design at New York City’s Pratt Institute when he conceived of five consumer products whose packaging would simply disappear as the product was being used. One of his designs is a bar of soap that comes wrapped in nontoxic, septic-safe, water-soluble paper that could be printed with the soap-maker’s logo and other pertinent information. Bring the bar into the shower, lather up, and watch the packaging dissolve. Packets of laundry soap designed by Mickelson would come in tear-off pods made of a similar water-soluble material; once the last pod in a set was used, there would be no packaging left behind. At the individual consumer level, the impact of such innovations can seem tiny, but Mickelson has calculated that a single truckload of his soap would eliminate nearly 4,000 pounds of packaging.

In upstate New York, a company called Ecovative Design is growing a replacement for expanded polystyrene (known more colloquially by its trade name, Styrofoam), a longtime bête noire of recycling systems, since it crumbles and blows around easily, has little resale value, and basically lasts forever. Ecovative Design’s substitute is made from mycelium, a network of fungal cells that grows naturally and rapidly in inedible crop waste and can be easily shaped into whatever form is desired. Best of all, it can be composted after use.

Right now, this “mushroom packaging” is a bit more expensive than conventional polystyrene, but the price will start coming down as the company scales up. There are already signs that increased demand is helping the process along. As co-founder Eben Bayer told an interviewer, many of his clients approached him saying they “had to get out of plastic.” There’s a growing sense among consumers, he said, that manufacturers should “stop sending plastic waste with their products.”

Across the nation, industrial designers grizzled and green—in both the chronological and the ecological senses of that second word—are innovating. They’re driven partly by the looming specter of resource depletion, but also by smart EPR legislation, by the desire to save money (less packaging means less expense), and by the imperative to respond to all those frustrated consumers who are fed up with excessive packaging and are willing to say something about it. The shift to a less resource-intensive future will require lots of things to happen: industry will need to retool, governments will need to enact new laws, and the public—crucially—will need to change its mind-set and its behavior. Tossing all our rigid plastics into a single bin might seem fantastic. But it isn’t the answer to our garbage problems—not if it obscures the need to consider where all these materials come from in the first place, and where they’re likely to end up.