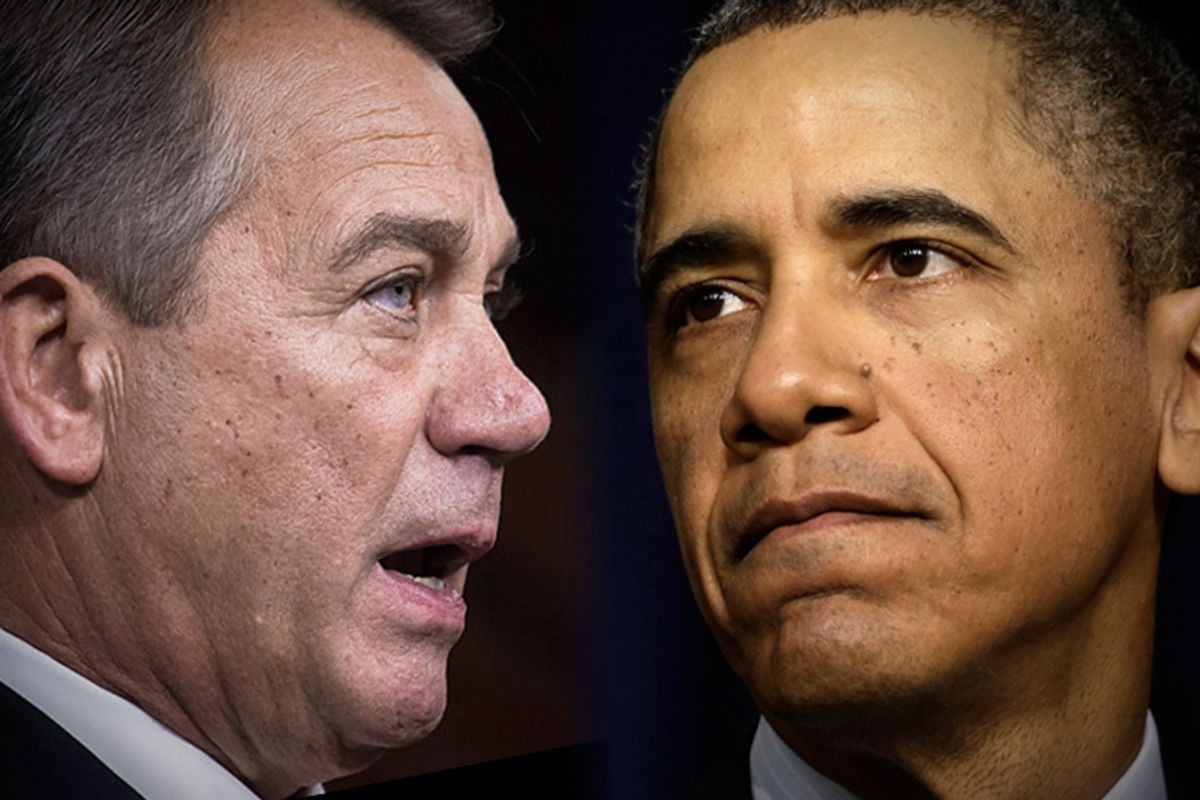 Today’s government shutdown is only one act in a budget brinkmanship drama that includes America’s next debt ceiling deadline, scheduled to arrive by Oct. 17. While some Republicans reportedly see the debt ceiling as their strongest leverage, some legal scholars have argued that President Obama could simply refuse to participate, wielding his legal authority – or obligation – to keep paying the bills even if no debt ceiling increase is passed.

The president has said White House lawyers “are not persuaded that that is a winning argument” – a position a White House official recently reaffirmed to NBC. But House Minority Leader Nancy Pelosi last week told reporters she “would never have taken that off the table.” Sens. Barbara Boxer, Tom Harkin, Bernie Sanders have urged the president to exercise his 14th Amendment option in the 2011 debt ceiling fight; former President Bill Clinton said he would have done it “without hesitation, and force the courts to stop me.”

To parse the law, politics and history in play, Salon talked to Garrett Epps, a legal scholar and former Washington Post staff writer who teaches constitutional law at the University of Baltimore. A condensed and edited version of our conversation follows.

If Congress refuses to raise the debt ceiling, what’s the strongest legal case for the president to ignore it?

There are two provisions of the Constitution that speak to this issue. One is the clause that gives the president the duty to take care that the laws be faithfully executed. And the other is the 14th Amendment, which imposes a duty on the government not to question the public debt of the United States authorized by law. So the combination of those two with some other statutes -- particularly appropriations statutes, in which Congress directs the president to spend money -- means that the president is supposed to try to follow all of the laws. And that includes the Constitution.

The Constitution doesn’t say Congress shall pay the debt -- it says the public debt shall not be questioned. And that means that all three branches of government are bound by this -- that’s the way I read it -- and if Congress declines to act, then the president arguably has not simply the power, but the duty to act in order to honor that norm.

Some people have said the president can deal with that by just paying the debt, and not spending money on anything else, because probably there will be enough cash on hand to pay the interest on the debt. But the problem with that is there are other laws providing that the president shall see to it that certain things are paid -- whether they’re entitlements like Social Security, or appropriated items like the military budget. Those are laws, and they are directed to the president to carry out. So the president is in a very difficult situation. He cannot avoid breaking the law by simply refusing to pay anything except the debt. He still will be violating the law and violating his duty that the laws be faithfully executed.

So the argument is that when you have dueling laws, you try to obey as many of them as you can. And the president can obey the command of the 14th Amendment and also obey the command of these appropriations and entitlement provisions by ignoring the statutory debt ceiling. And I think that is a fairly strong argument, coupled with a historic fact and that is that since the time of Washington, there has been a school of constitutional interpretation, which is quite powerful, which says that when the federal government has a power and that power is not explicitly given to Congress, then the president can exercise it.

We have the command to honor the debt in Section 4. That is not directed at any branch. That authority arguably can be claimed by the president. It’s no stranger, it’s no more of a leap, than some of the other claims that have been made successfully on behalf of the president over the years, such as the power to abrogate treaties. That’s not provided for in the Constitution. The president assumed that power fairly early in the republic, and subsequently there was a court challenge, and the court said we’re not going to stop this. That’s an example of how the executive gets power, gets authority, out of basically constitutional ambiguity or silence.

If the president moved forward in this way, what would the legal fight over it look like?

It would look like what is called impeachment. I can’t imagine any other way that the matter would be resolved. I may be missing something. [But] if the president is paying the debts, and he’s paying the appropriations, then I don’t see what individual has the power to sue him. And Congress does not have the power to sue the president and say we don’t like what you’re doing. So the remedy Congress has would be to bring articles of impeachment in the House.

When you’re dealing with the Supreme Court generally, and this Supreme Court in particular, you cannot rule out the possibility that they’ll inject themselves into it. But at present I don’t see the path by which they would.

What historical parallel comes to mind for this kind of constitutional confrontation?

The very first constitutional confrontation between the executive and the Congress occurred when Washington was president, and he proclaimed American neutrality between England and France after they went to war. The Jeffersonians were outraged by that. They made a stink to the effect that the president didn’t have this power, and Washington said he did, and basically in the end Congress acquiesced. And I can imagine that being the circumstance here.

The really interesting example is the reaction when Obama went to Congress to ask for authority to bomb Syria, and a number of members of Congress reacted very negatively and said, “What are you doing? You have the authority as commander in chief.” People have come to expect president to act unilaterally when they say there’s a threat to the national security interests of the United States.

Suppose the Venezuelan army invades Florida. But meanwhile Congress has passed a statute that says, “You can’t go into battle with Venezuela because of the ‘Venezuelan Battle Ceiling.’ We won’t let you defend Florida unless you repeal Obamacare.” Well, I think it’s pretty clear the president would be entirely legally justified in saying, “I’m the commander in chief. The armed forces and the nation are under attack. And so regardless of whether I’m authorized by Congress to use military force, by practice, custom and the necessity of the case I can.” Now I think you can argue this is precisely the same thing -- that the damage to the country is analogous to permitting an invasion to take place without being resisted by the armed forces. The president is not commander in chief of the Treasury, but he does have the duty to take care that the laws be faithfully executed.

I don’t say it’s a slam dunk. There are people who say this is wrong, and their arguments are not laughable. We don’t know whether the president has the authority to do this or not. If Obama were to do it and he was not impeached or removed from office, then the president would have that power and we would never have another debt ceiling crisis again.

I’m just saying the Constitution’s kind of ambiguous, and under certain circumstances where there’s virtually an existential threat to the nation, the president has acted in the past and gotten away with it.

How does this executive authority question compare to Obama’s approach to the use of force in Syria, Libya and Pakistan?

There have been many times, going back hundreds of years, when presidents have used military force without seeking congressional authorization beforehand, and in all of those cases there was a circumstance that made it in some sense an emergency. In Syria, you don’t have anything like that, and therefore if there’s going to be war, you can argue the president needs to ask Congress. Now compare that with what happens if the Congress refuses to raise the debt ceiling, and we’re preparing to default on our debt. If that happens, it is a very severe immediate emergency threat to the nation. Not simply to the economy -- although that in itself is apocalyptic -- but to the country’s full faith and credit, to its ability to function in the international plane. So the president, it seems to me, would have much more justification for saying this is a genuine emergency, I can’t wait for Congress to decide.

The Pakistan drone war has been carried out under the rubric of the Authorization for Use of Military Force, which says the president has the authority to use military force against al-Qaida and forces associated with it wherever they may be found. Libya is a more difficult question. The [administration’s] argument was twofold. One is that our forces were not really going into hostilities, and so the War Powers Resolution -- and, arguably, the war power itself -- was not triggered. And the other is that we were doing it pursuant to a multinational treaty, and had to do that to honor our obligations as members of NATO.