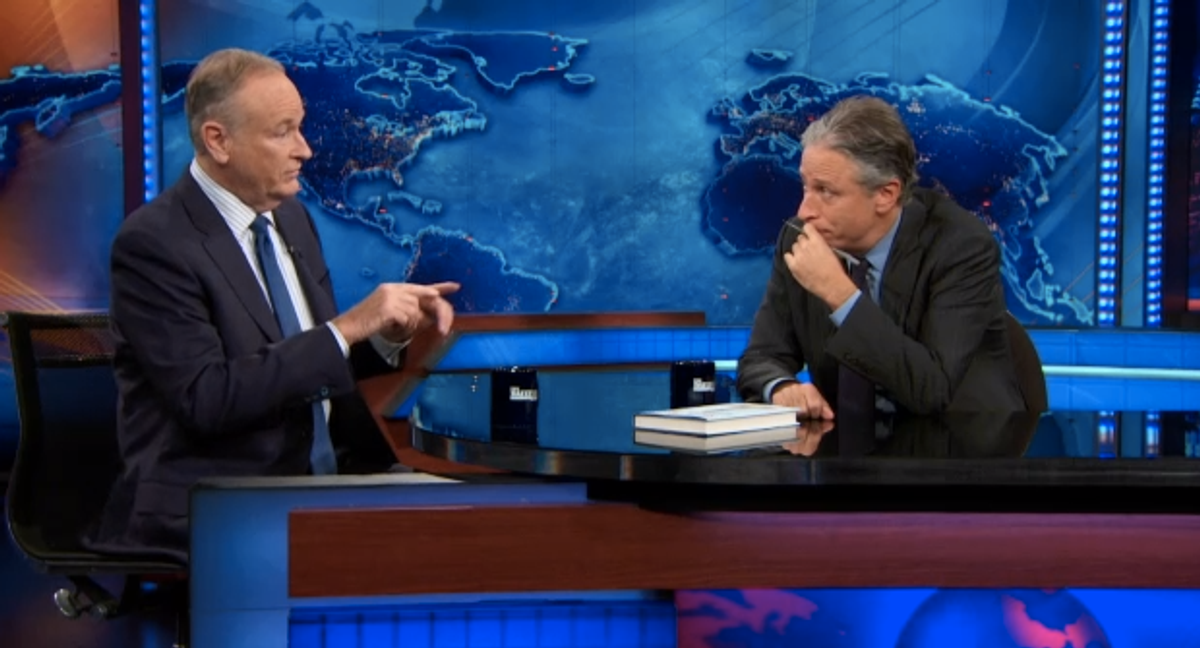 In a segment sponsored by the word "Why" (as in "Why do you let that guy on your show?"), "How" ("How do you sit across from that guy?") and "It's just ... It's just I find his views so repellent and you're endorsing him by giving him a platform, and do you really like him?" Jon Stewart begrudgingly invited human jar of pudding Bill O'Reilly to "The Daily Show":

As always, the two adversaries made for great television. "How many more of these?" asked Stewart, referring to the pseudo-historian's book franchise on the death of historical icons Jesus, John F. Kennedy and Lincoln.

O'Reilly's next book will focus on a WWII figure, and "Killing Jesus" has already sold 350,000 copies, making him "the new Oprah," Stewart quipped.

While trying to "be nice," the two quickly delved into the familiar territory of political debate, taking on the government shutdown and gun control. "I called both parties to knock it off," said O'Reilly, referring to Monday night's government shutdown. "And they will," he assured Stewart.

Stewart objected, saying, "No, the Republicans are doing something. The Democrats are just enacting a law they passed in 2009."

"Everybody has a problem with that," said O'Reilly. "The polls say nobody wants this law, so they're looking at it again."

"Oh, I didn't realize that's how we do things, now," scoffed Stewart.

The political mastermind also offered up his solution to Syria: attacking it. His reason? "Obama looks weak to the world. I think that is a fact."

"People are taunting us, Stewart, they are taunting America," O'Reilly said ominously, referring to President Obama's unfulfilled threat to strike Syria upon use of chemical weapons.

Yet, at the same time, O'Reilly argued that "I don't have any beef the way it worked out."

The current diplomatic agreement is "good the way it worked out for the country. But President Obama looks like a weak leader," he explained.

"But let's look at what you just said," said Stewart, seemingly fighting off an O'Reilly-induced headache. "That's a high school mentality for governing a country," he said.