Obamacare's next real fight comes in 2014 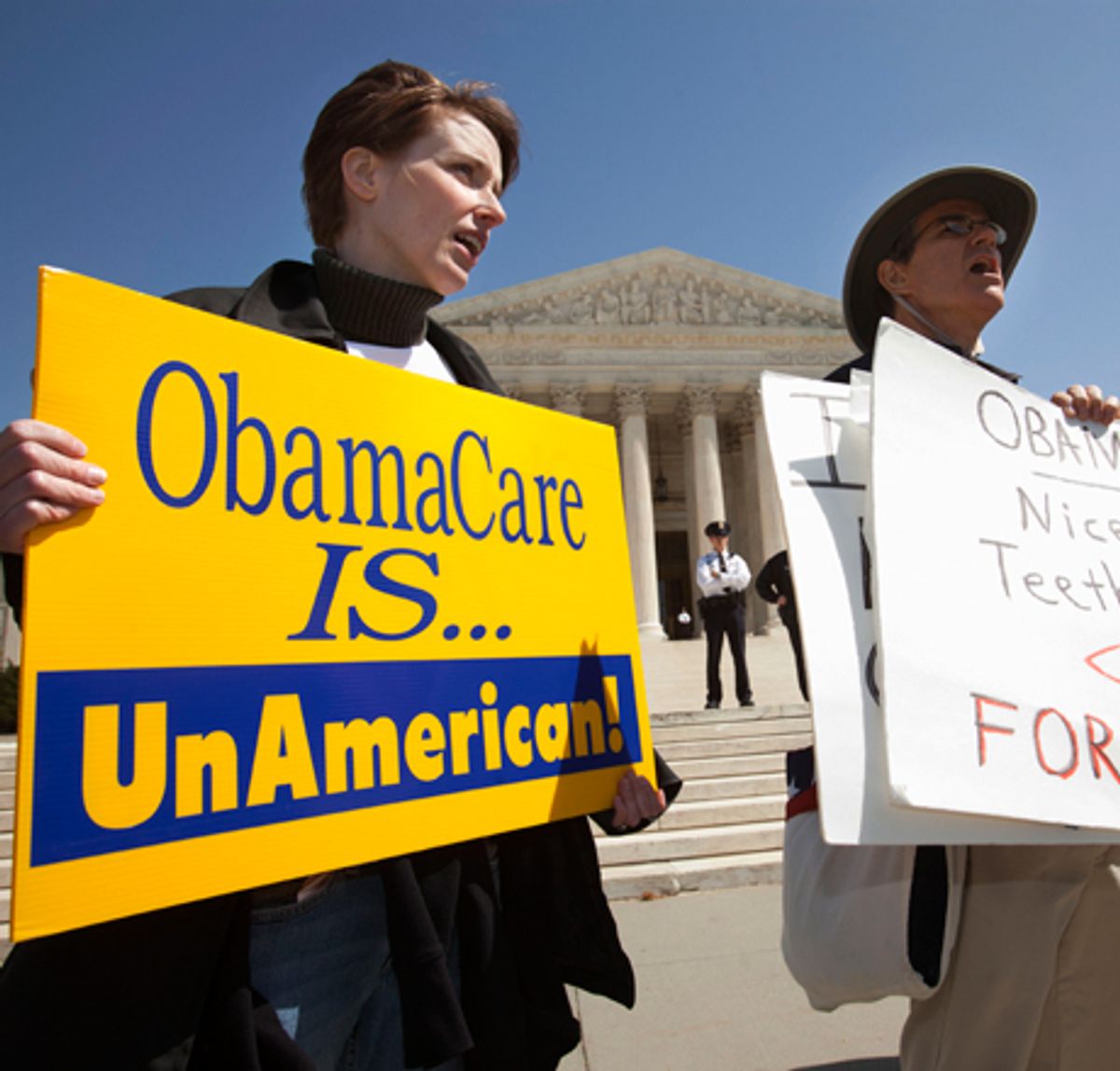 It's been 100 years since ideological conservatives joined with doctors and insurance companies to kill the first movement in the United States for what was then called "compulsory health care." Now, on the eve of their epic loss, those who deeply hate the idea that we have a collective responsibility to care for each other are desperately trying to stop history's clock.

Beneath the tested rhetoric from opponents like the Heritage Foundation and Texas Senator Ted Cruz about a government takeover or Obamacare killing jobs and the economy, we can find expressions of the driving force behind the right's obsession. One telling quote is from Missouri State Senator Rob Shaaf, who declared, “We can’t afford everything we do now, let alone provide free medical care to able-bodied adults.” Another is the proud statement from Steve Lonegan, the Republican candidate for U.S. Senate in New Jersey, who told me in a debate on Obamacare at the FDR Library, “I only care about me and my family.”

These celebrations of extreme individualism are bald expressions of the "47 percent of Americans are takers" ideology that has become the driving fixation of Republicans, with the latest example being the vote in the House to deny food stamps to 4 million people because they are unemployed.

The right most fears the establishment of another new program based on our common humanity. With her gift for sarcasm, New York Times columnist Gail Collins captured the irony of the Republican’s desperation to stop Obamacare before it starts: “The new health care law is going to be terrible, wreaking havoc on American families, ruining their lives. And they are going to love it so much they will never have the self-control necessary to give it up.”

If this is a defining moment for the right, it is also for the left. As Jonathan Chait wrote this week, in a great retrospective on Republican opposition to the ACA, “The transformative potential of Obamacare is not a conservative hallucination.”

For all its faults, the Affordable Care Act is the biggest expansion in half a century of the progressive belief that we all do better when we all do better. Almost 50 years ago, Medicare was greeted by Ronald Reagan – then a mouthpiece for the American Medical Association –  as a foot in the door to a totalitarian takeover. The right has long understood how high the American view of the role of government would be lifted if people came to rely on government for something as essential to a person's well-being as health care.

The battleground now shifts to how the public perceives the law's impact. I would like to believe that Ted Cruz was right about this, at least, when he told The Daily Caller, “President Obama wants to get as many Americans addicted to the subsidies because he knows that in modern times, no major entitlement has ever been implemented and then unwound.”

However, the lesson of the past three years is that the rhetoric has been more powerful than the reality. The most telling data is that the age group that has most definitively benefited from the Affordable Care Act, seniors, has the highest disapproval rating of the law. Thanks to the ACA, some six million seniors have received free preventive care under Medicare and 6.3 million people on Medicare saved over $6.1 billion on prescriptions. Still, the relentless attack messages aimed at seniors, starting with the death panel lies during the legislative debate on the law and accelerating in the 2010 election, have taken their toll.

On its face, opposing Obamacare should not be a winning electoral issue in 2014, if only because it will actually affect so few people. Several million people will get health coverage and very little else will change. But we can be certain that the right will continue to blame every established long-term trend in health care and the workforce – rising premiums, higher deductibles, fewer people getting health coverage at work – on the ACA.

The implementation of the ACA will also give its opponents new ammunition. Not just from the inevitable glitches in signing up people, made worse by Republican sabotage in many states, but from the law's biggest shortcoming: while millions will gain access to affordable coverage for the first time, others will be asked to pay more than they can afford or pay a fine.

Still, the fact that Obamacare will finally be doing what it was designed to do puts its defenders on higher ground, if we embrace the hard lessons of the past three years. Cementing the Affordable Care Act as a pillar of social security will require that Obamacare's champions aggressively respond to attacks and tell the stories of people whose lives have been transformed by the law.

Until now, it has been almost impossible to explain to people how the Affordable Care Act will work. It has been a new, complicated concept rather than a real-life gate to getting health coverage. But the millions who will begin to benefit on January 1 will be able to tell a different story: the cancer survivor who can get coverage despite his preexisting condition; the budding entrepreneur who can leave her job to start a small business; the 60 year-old who lost her job but was still able to get health coverage.

With Obamacare a reality, not just a threat, their stories can be added to stories of a senior who is saving hundreds of dollars on Medicare prescriptions and the family whose finances were not wiped out when their 24-year-old son, still on his parents' health plan, was in an accident.

The debate will be sharpest, and have the most impact, leading to the 2014 congressional elections. Republicans will be pushed by the right to make Obamacare a big issue, regardless of whether their pollsters advise that the failure of the world to implode after its implementation has taken some of the sting out. We can be sure that the Koch brothers will fund attack ads in swing districts and states. In 2010, the failure by Democrats to vigorously defend the law, particularly among seniors who vote most heavily in non-presidential elections, was a big factor in Republican success.

Progressives must engage in the fight now and prepare for 2014. It will not be enough to enroll people in Obamacare. We will need to organize new enrollees, their families, and their communities to be powerful spokespeople for the Affordable Care Act.

The ACA has proven to be the cat with nine lives, surviving near-death experiences during the legislative battle, the Supreme Court ruling, congressional and presidential elections, and the barrage of repeal votes, which are reaching their height now. The new day that the right has feared for a century will start in just three months. But the battle will not end then. The next big test will be November 2014. The stakes for people’s lives and livelihoods, and for the progressive expression of the American values of life, liberty, and the pursuit of happiness, could not be higher.