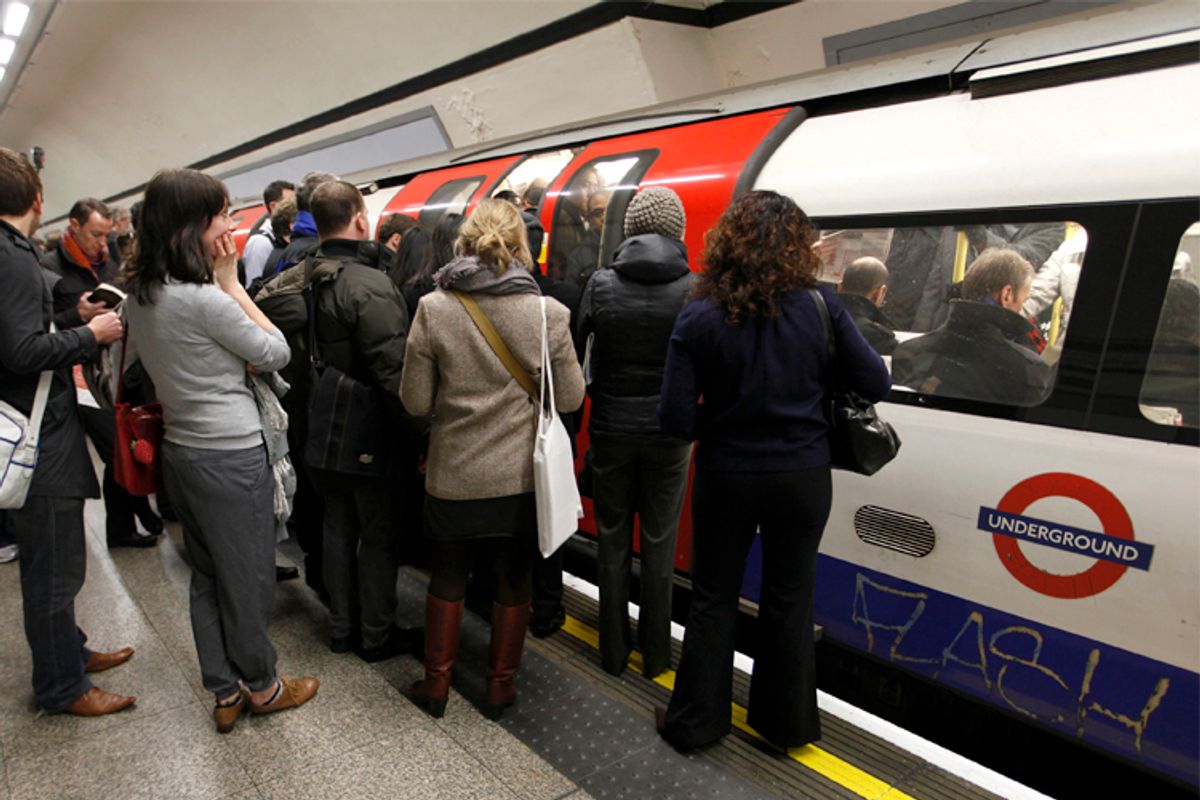 Travellers on the tube train in London (Reuters/Andrew Winning)
--

If you move through the world with female anatomy, you pretty much assume you're going to be harassed for it. At some point in the course of getting from Point A to Point B, you figure you'll be groped. A 2012 survey of Londoners revealed that "43% of women aged between 18 and 34 had experienced sexual harassment in public spaces in the last year." So deeply embedded in our psyches is the expectation of harassment that the notion of being protected from it almost seems unbelievable. What would it look like if we were? London commuters are finding out.

The results were part of Project Guardian, a joint effort by the British Transport police, Metropolitan police, City of London police and Transport for London launched in April, in collaboration with the Everyday Sexism Project, the End Violence Against Women coalition and Hollaback London. The goal was to improve the odds – a Transport study had shown that "15% of women and girls had experienced unwanted sexual behavior on the transport network, but 90% of them had not reported it." In a piece for the Guardian earlier this year, Ellie Cosgrave wrote that after a man ejaculated on her on a crowded train, she initially felt the incident "fell in line with the litany of gropes, cat-calls and harassment that I'd been dealing with since I was a teenager. I was able to file it away in the box labeled 'feeling unsafe around men,' but what I didn't realize at the time was that that box was already full-to-bursting."

Superintendent Nicki Watson of the British Transport police told the Guardian Tuesday, "More victims are coming forward to report what's happened to them, and more offenders are being caught. Despite these good results we must not become complacent, and will be working hard to further tackle inappropriate sexual behavior on London's transport network."

But the movement isn't just about adding more enforcement. It's about calling out unacceptable actions – letting other women know that they're not alone, and perpetrators that they're being watched. It's about enlightening people that no one has a right to touch another person without consent, that abusive, harassing behavior is not a form of flattery, and that if you engage in it because you assume your victim won't speak up, you may just be proven quite mistaken. On Twitter, British Transport police and the Everyday Sexism Project have asked for examples of harassing and threatening behavior, and the responses – from women recalling incidents of being grabbed, pinned and verbally abused – have been eye opening. As Project Guardian explains, fighting unwanted sexual behavior first means "increasing awareness and confidence amongst the public to report" it.

Change starts by deciding that we are worthy of being treated with respect, believing that we will be taken seriously when we say that we are not -- and then if we aren't, demanding reform. Loudly and repeatedly. Project Guardian is an example of what is possible when women and women's concerns are taken seriously. It means consequences for offenders. And ultimately, it means a smoother ride for everybody.