When strangers mocked me for my weight, it was a lesson in Internet cruelty, mean girls -- and fighting back 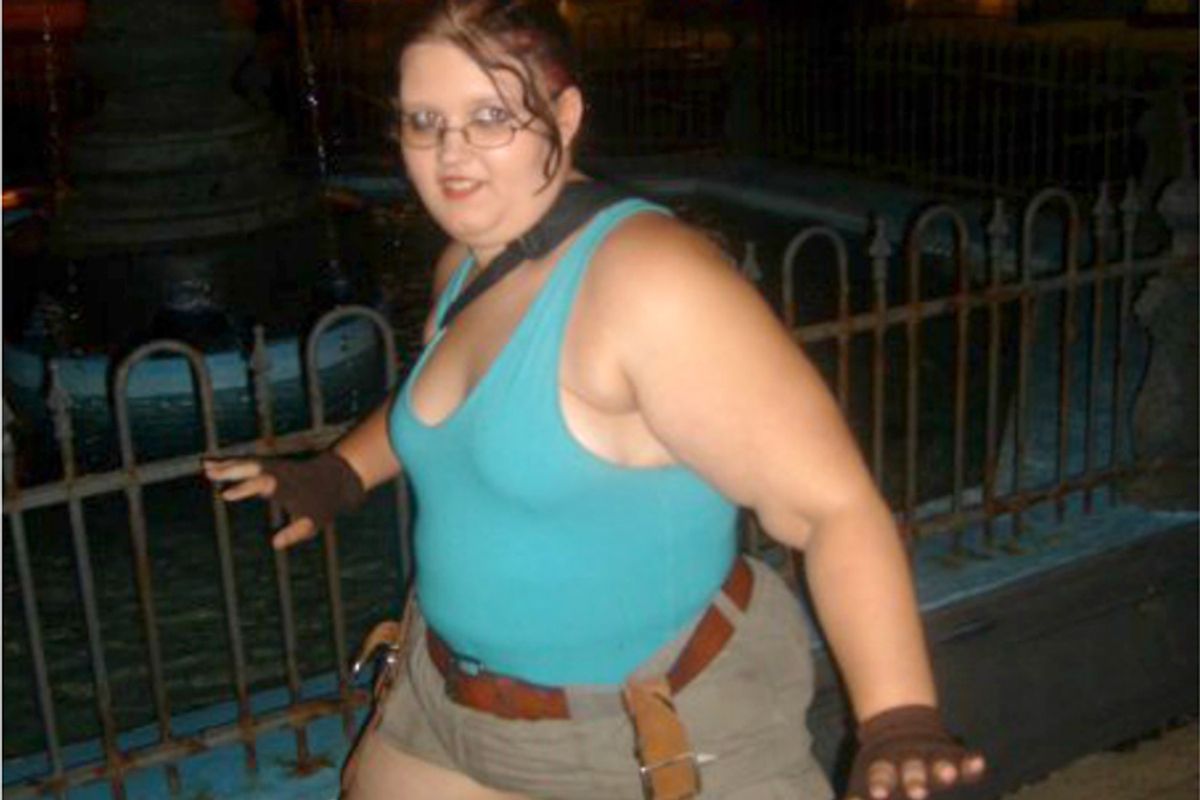 (Courtesy of the author)
--

I logged onto my Facebook one morning to find a message from a girlfriend. “You’re internet famous!” it read. She sent a link to a very public page whose sole purpose was posting images that mock people’s appearances. There I was in full glory -- a picture of me dressed as my hero Lara Croft: Tomb Raider for Halloween -- but written over the image were the words “Fridge Raider.”

Funny enough, I wasn’t even angry at first. I was actually kind of amused. Who doesn’t laugh at unfortunate shots of poorly dressed strangers? I’ve certainly done it before; the Internet runs on this kind of anonymous scorn. There are entire websites dedicated to the poor fashion choices of random people. And just like me, most of those people are fat.

I don’t generally view my body size as positive or negative -- it simply is. I eat right (most of the time) and I exercise (an inordinate amount), but it does little, thanks to a struggle with polycystic ovarian syndrome and a failing thyroid gland. I’m strong, I’m flexible and my doctor assures me my health is good, but the fact remains: I’m larger than someone my height should be.

None of this played into my decision to dress up as Lara Croft, one of the most kick-ass female video game characters ever. Croft is feminine but dangerous, well-educated but athletic, and she’s also easily recognizable, which makes a Halloween costume fairly easy. That picture was taken late in the evening -- I was red-faced from the heat, my makeup was sweating off and I was lacking proper boob support (a problem the pixelated Croft has never confronted). But I was having fun, and seeing the image again on that website, I still thought it showed.

So I laughed it all off at first -- but then, I read the comments.

“What a waste of space,” read one. Another: “Heifers like her should be put down.” Yet another said I should just kill myself “and spare everyone’s eyes.” Hundreds of hateful messages, most of them saying that I was a worthless human being and shaming me for having the audacity to go in public dressed as a sexy video game character. How dare I dress up and have a good time!

We all know the awful humiliation of a person laughing at you. But that feeling increases tenfold when it seems like everyone is laughing at you. Scrolling through the comments, the world imploded -- and took my heart with it.

I called my friend Terri Jean, a photographer. She reminded me that I was beautiful, and told me I would get through this. And then, like any kick-ass heroines, we came up with a plan.

The first thing I needed to do was figure out where the picture came from. That wasn’t hard -- it came from me. I’d posted the image on Facebook, but like so many before me, I’d failed to pay attention to my privacy settings when I uploaded it. Instead of restricting access to my friend network, I’d inadvertently given access to the whole world.

But Facebook made it easy to find people who had commented on the images. By now, the picture had metastasized through reposts on Twitter, Tumblr, Reddit, 9Gag, FailBlog. But looking through the Facebook “like” function, I could track down the most offensive commenters.

Most of them were women. Shocked? I wasn’t. Anyone who’s survived high school can tell you how women slice each other up to make ourselves feel better. I sent several of those women a message.

”You’re being an asshole,” the note said. “Why don’t you just do the right thing and delete the post and stop sharing it?”

The most common response was not remorse or defensiveness but surprise. They were startled that I could hear what they’d been saying. Their Facebook pages were set to private, after all. Most didn’t realize that when you post to a public page through your Facebook account, it doesn’t matter that your own content is restricted: The whole world can read your words anyway.

And of course, they hadn’t really thought of me as a person. Why should they? These images are throwaways, little bursts of amusement to get through a long workday. You look, you chuckle, you get some ridicule off your chest and move on to the next source of distraction. No one thought about the possibility that I might read those words. Far less, that I would talk back.

Next, I began the monumental task of sending out copyright violation notices to the websites hosting the image -- I would have to issue hundreds of them. My work as a paralegal had given me some training in this regard, but it was tedious, like pulling weeds out of the planet's largest garden. I had to seek out each instance of the image and sift around until I could find contact information.

I got a fair number of them taken down, but once something like this spreads, it’s out there forever. Friends still send me emails asking if I know about this, and I can hear the anxious balancing act in their voices, trying to be a good friend and alert me to this danger while still trying to shield me from the hurtful attacks. I still go through the less tasteful side of the Internet monthly and issue take-down notices for new instances, but it’ll never be completely gone, which is part of why I decided to post the image in this story. On my own terms. To own it again, without shame this time.

But along the way, in my journey to control something that was ultimately uncontrollable, I encountered something that cut right through the haze of shock and depression: People were actually defending me.

Perfect strangers pointed out that there was nothing wrong with a woman of large size dressing up to have a good time. Some commenters even accurately guessed that I had polycystic ovarian syndrome. The disease is characterized by an accumulation of fat in the stomach, making it look, as one insensitive doctor told me, “like you’ve got a basketball shoved under your shirt.”For every three negative and hateful comments, there was at least one positive one.

In the months since, my attitude toward these throwaway images of mockery on the Internet has changed. I no longer find them funny. Each one of those people is a real human being, a real person whose world imploded the day they found themselves to be a punch line on a giant stage. I speak up whenever a friend gets a cheap laugh from one of these sites. I ask one simple question: “Why do you think this is funny?” Very few have a good answer. Mostly they just say, “I don’t know.” Reminding people of our shared humanity hasn’t exactly made me popular, but it feels like the right thing to do. I know what it’s like to be the person in that horrible photograph. I can’t inflict such pain on someone else.

And while my self-confidence took a large blow from the experience, I’m getting over it. My photographer friend Terri did a photo shoot with me after it all went down. She’s a retro pinup photographer, and I’ve been posing for her for a while now, but that particular shoot felt great. Just to be seen a little bit more as I wanted to be.

But I refuse to disappear. I still go jogging in public. I don’t hide my flabby arms or chubby ankles for fear of offending someone else’s delicate sensibilities. I dress in a way that makes me happy with myself. And this Halloween, I’m thinking of reprising my role as Lara Croft just to give all the haters the middle finger.

And no, I won’t be putting the pictures online this time.