The opposite of "death panels": How the ACA could lead to a better way of dying

With more Americans insured, the Death With Dignity movement could get a surprise boost 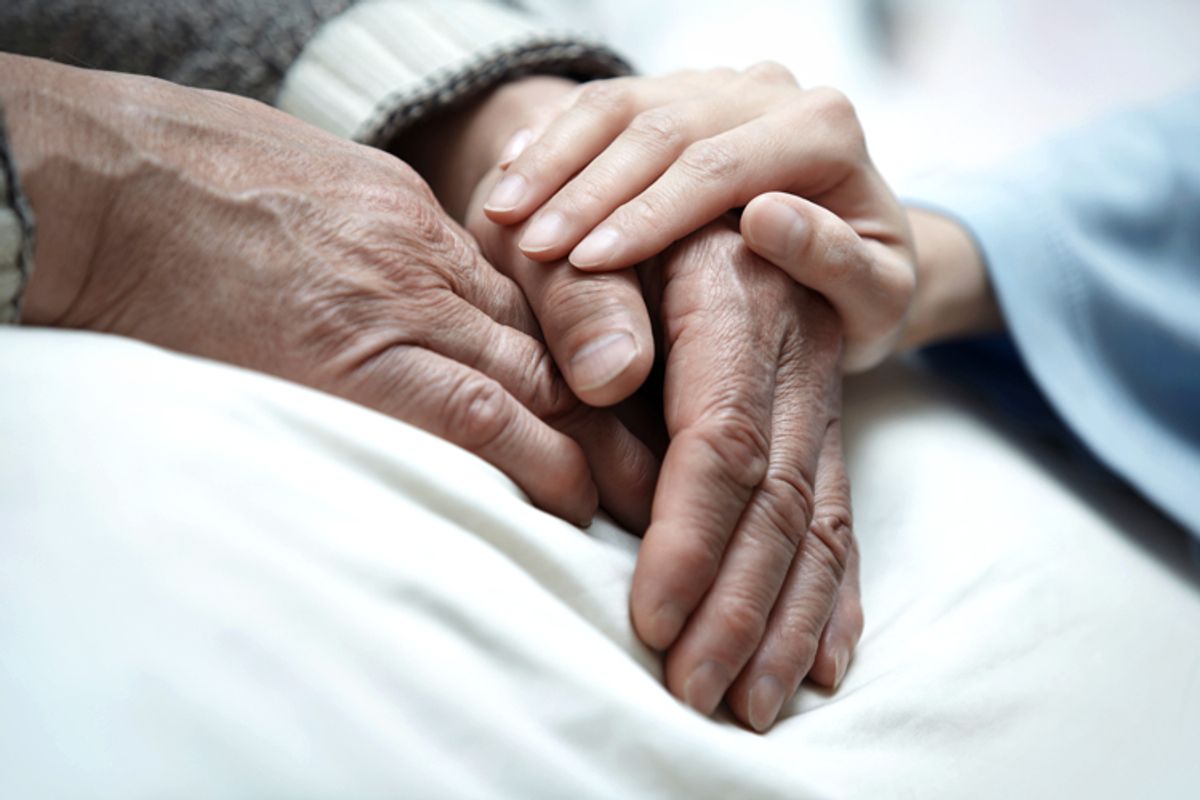 In all the excitement/foot stamping/confusion over the Affordable Care Act, there's been a lot of talk about how the changes to the healthcare system will improve Americans' lives. But it might also improve their deaths.

The ACA news is poignantly timed. Earlier this week, in a crass bit of family skeleton digging, the New York Post revealed that New York City mayoral hopeful Bill de Blasio's father died of a self-inflicted gunshot wound – while he was dying. In a statement, de Blasio confirmed, "My father tragically ended his life while battling terminal cancer in 1979." And speaking to WNYC, he added, "It was an unbelievable, incredibly difficult moment in life. We all thought we would be saying goodbye in some more traditional way, and suddenly he was gone."

The story of de Blasio's father, like that of every death, comes with its own unique circumstances. He was a traumatized veteran of World War II who was a chain smoker and was, according to de Blasio, "drunk pretty much every day" until he left the family outright while his children were still young. Recalling that "unbelievable, incredibly difficult moment," de Blasio noted, "He had lung cancer, he had emphysema, the cancer had metastasized.  It was clear he didn’t have much time left. He didn’t give any indication that this is what he would choose to do, but we all knew the end was near one way or another."

It was a brutal situation for a man clearly haunted by many other demons, but it's also one that plays out in different ways every day. It's the story of the terminal patient, facing a cruel, painful end, and wondering if there isn't some other way.  This past summer, author Jane Lotter died of endometrial cancer -- and went viral with the obituary she penned for herself. It was a beautiful and deeply moving ode to the life she loved living, and the kicker made for compelling food for thought. "Jane took advantage of Washington state's compassionate Death With Dignity Act," it read, "and died peacefully at home on July 18, surrounded by her family." She poured "powdered barbiturates, provided by hospice officials, into a glass of grape juice" and expired quietly a few minutes later. As her husband of 29 years, Bob Marts, later told the New York Times, "Suicide is the opposite of how Jane saw her life. She loved life. She just didn’t want to end up like a fish flopping on a dock."

Currently only three states have Death With Dignity laws – a surprisingly low number given that there isn't a one among the other 47 in which somebody isn't dying right now. Could the Affordable Care Act change that? Peg Sandeen, executive director of the National Death With Dignity Center, speculates: "I think the ACA is going to change how we access healthcare and that change is going to come slowly. What I hope it means is that people have access to a wide span of options across the health spectrum."

That's a spectrum that must reflect its true and full range, including not just screening and treatment but end of life care. As Sandeen notes, "Our opponents say that it’s a slippery slope. But it's interesting that people who access us have access to good quality care." The data bears it out – over a 15-year span, 98 percent of terminally ill Oregonians who've exercised their state's right to die with dignity have had insurance. In 2012, all of them did. Opponents of compassionate end of life care cloak their rhetoric in the scary language of "death panels" and "culture of death" and "assisted suicide"; they warn darkly that insurance companies will suggest patients kill themselves as a cost-cutting measure. But the reality sure seems to be that exercising the right to a peaceful death is a choice made not by individuals who are marginalized or desperate, but those who have access to quality care.

"I'm a social worker," says Sandeen. "When I'm working with a group of people who are mentally ill or have substance abuse and conversations about suicide come up, it seems so profoundly different from when I have conversations with people who just want to control the manner and timing of their death." And as Marcia Angell, former editor in chief of the New England Journal of Medicine and a woman whose own 81-year-old father shot himself to death while he was suffering with late-stage prostate cancer, wrote eloquently last year, "Why should anyone — the state, the medical profession, or anyone else — presume to tell someone else how much suffering they must endure as their life is ending?"

As those of us fortunate enough to have adequate healthcare know, insurance is no protection from illness, and it sure as hell won't protect anybody from dying. But what better options for all Americans might mean is a broadening of the conversation about what compassionate, helpful healthcare truly means. No terminally ill person should feel like a bullet is the only option. Better healthcare should mean more of us have the opportunities to lead longer lives and healthier lives. And it should also, if we can look at the issues with clear minds and loving hearts, give us more means to more gracefully end those lives.