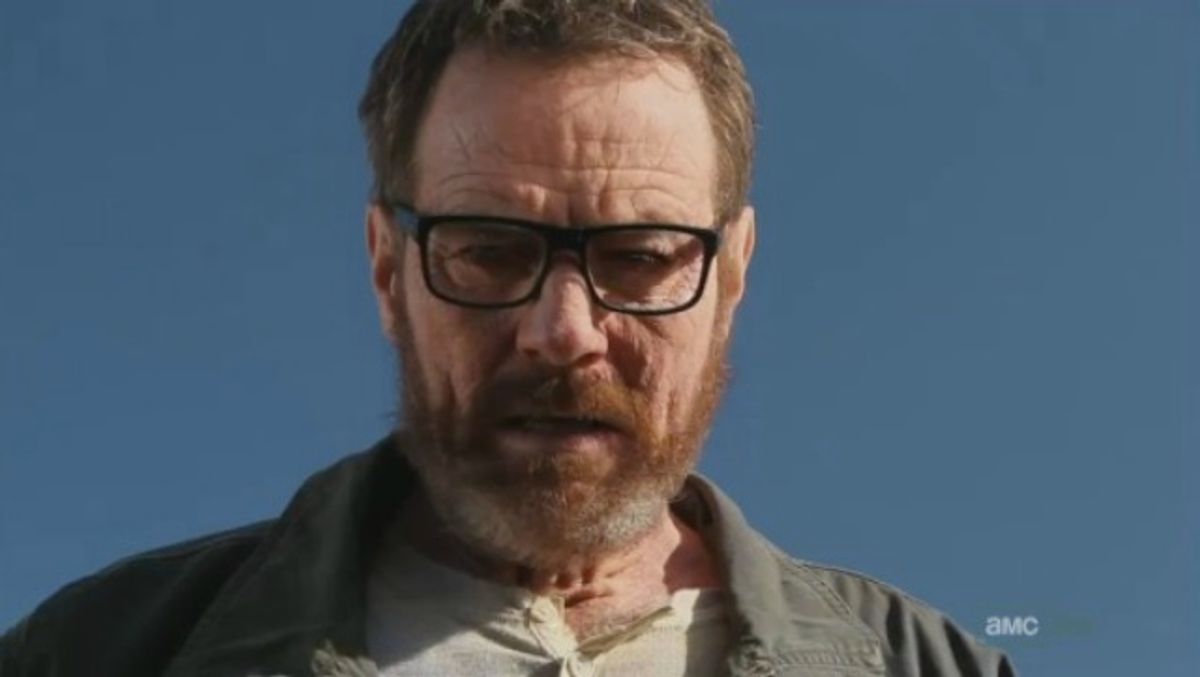 Do you know what would happen if I suddenly decided to stop going into work? A business big enough that it could be listed on the NASDAQ goes belly-up. Disappears! It ceases to exist without me.—Walter White

Before the post-finale Breaking Bad chatter dies down for good, let’s not overlook one of the show’s most instructive features: In many ways, Walter White is a quintessentially modern American CEO. While White spouted a lot of figures and formulas in five seasons of television, but there’s one number his character embodied more than any other: the 1 percent, and his insatiable drive to be part of it.

It’s all there: the ego, the entitlement, the testosterone-fueled drive to come out on top, and the sense that money, not character or relationships, defines a person’s worth. Above all else, there's the sense that even the most venal and criminal of enterprises becomes ennobling when you earn lots of money for it.

I'm not saying that every chief executive officer is like Walter White. The ones who invent a product, create jobs, build wealth for themselves and others, are a different breed. They’re also increasingly rare, as more and more CEOs earn their livings by manipulating politicians, deceiving shareholders, and playing a better game of corporate politics than their competitors.

If you don’t think Walter White was brilliant at corporate politics, as brilliant as Jamie Dimon or any other real-life CEO, think again: His relationship to Gus Fring alternated between braggadocio and utter servility, and ultimately ended with murderous treachery. What corporate executive hasn’t seen that drama played out over and over (if not with the last part enacted so literally)?

Walt’s is a story of sublimated drives released by unforeseen events. Consider his character arc: Brilliant chemist once owned one-third of a company that’s now worth billions, but was cheated out of his share somehow (possibly by himself). He became a mild-mannered, lower-middle-income chemistry teacher in Albuquerque, where he might have been content to remain until terminal cancer forced him into an existential crisis. Then, confronted with a lifetime’s worth of resentment, Walt’s drive to become a master of that universe kicks in.

Soon after that, Walter White joins the 1 percent – then ascends to the 0.1 percent, the 0.01 percent, and beyond. What does he say to his wife in his shattering telephone tirade during the episode “Ozymandias”:

“You, you have no right to discuss anything about what I do. Oh, what the hell do you know about it anyway? Nothing. I built this. Me. Me alone. Nobody else!”

This speech mixes cunning and fury, guile and animal rage, as Walt calculatingly exonerates Skyler while at the same time breaking down with genuine emotion.

White can make more of a case for having built something than most American CEOs, many of whom depend on implicit or direct government support for their wealth. (Think Jamie Dimon at JPMorgan Chase, David Cote at defense contractor Honeywell, or Jeffrey Immelt at GE and GE Capital.)

Walt, on the other hand, actually did build his own empire. But he had a lot of help, from line employees like Badger and Skinny Pete, from organizational predecessors like Gus Fring, and most of all from loyal lieutenant Jesse Pinkman, whom Walt sometimes treated like a son but never like a business equal. Walt displayed CEO characteristics from the start, snarling at his underling and demanding near-impossible accomplishments from him. Arrogant and entitled, Walt took on Jesse’s successes as his own. He couldn’t bring himself to praise an underling, even when it would serve his business interests. Only after Jesse rejects a partnership offer and points out that Walt consistently criticized the quality of his work is White able to say “Your meth is good, Jesse. As good as mine.”

In the beginning, Jesse only became his partner because White threatened to turn him in to the authorities. But their tense partnership works, thanks to Walt’s insatiable drive. They gradually take over the distribution networks for their product, a project mainly achieved through murder, a technique which distinguishes Walt from his more mainstream peers.

Like many CEOs, Walt was a perfectionist, a taskmaster with decidedly anal-retentive tendencies. This is not always a bad thing in an executive, by any means, and Walt’s obsessive traits help build his enterprise into a success. In fact, Walt’s emphasis on customer satisfaction puts him ahead of many other American CEOs. “There’s no room for error with these people,” Walt says of their clients.  Too bad more executives don’t think that way about their customers.

But Walt was always a cheater, on matters large and small. Early on, when he and Jesse flip a coin to decide who must kill their captive Krazy-8, Walt loses and promptly asks: “Best two out of three?”

He was a con artist, too, and the person he conned most successfully was himself. That may be the most distinctive trait he shares with so many of his fellow CEOs: the ability to believe he’s a self-made man, a “job creator,” indispensable.

Consider the quote at the beginning of this piece. Contrary to Walt’s self-important ravings, he didn’t “create” an $80 billion business. He took over a business that was already thriving when Gus Fring ran it. And it didn’t go "belly up,” “disappear,” or otherwise “cease to exist” when Walt left for the snow-covered wilds of New Hampshire. It continued to thrive, with distribution in Lydia’s capable hands and manufacturing – Walt’s specialty – adequately being handled by a gang of neo-Nazis and Jesse as a captive worker.

Walt was always able to convince himself he was a good person, a wise person, even an enlightened being. He purloins a quote from no less a sage than the Buddha when, early on, Jesse asks why he wants to go into the meth business.

“I am awake,” Walt answers.

When the Buddha achieved enlightenment and his peers saw the spiritual transformation in him, they asked if he was a god, a human being, or something else. “I am awake,” replied the Buddha.

As we quickly learn, Walter White is no Buddha.

It’s no mistake that Walt says his business is “big enough to be listed on NASDAQ.” That’s where technology businesses, presumably including his old company Gray Matter, list their stocks. Walt doesn’t see himself as a drug dealer; he's a tech entrepreneur.

Walter also had a habit of deluding himself into thinking he was on the side of justice. Like his peers in Fix the Debt, it was easy for him to confuse his own well-being and that of his heirs with the best interests of the world as a whole. After he terrorizes and threatens his wealthy ex-partners into passing drug money to his unknowing son (an act that would morally horrify the boy), he assumes the moral high ground. “Cheer up, beautiful people,” he tells them. “This is where you get to make it right.”

The law was never an impediment for Walter White. In fact, he derived a physical pleasure from breaking it. “Why was that so good?” Skyler asks him after they have sex in the car. “Because it was illegal,” says Walt.

Like many a CEO, Walt saw everything in terms of winning and losing. He poisoned a child and bombed a nursing home to defeat Gus Fring, and when Fring was dead and Skyler asked what happened, Walt’s answer said it all: “I won.” It was reminiscent of the way Wall Street traders would cheat their own customers, then get off the phone and exult, “I ripped his face off.”

Like many other CEOs, Walt claimed all his misdeeds were done for the sake of his family. That places a moral burden on his wife that isn’t lifted until the final episode, when he admits: “I did it for me.” That moment of honesty places Walter White on a higher moral plane, at least in that respect, from many of his more legitimate peers.

In the end, it’s all about male competition, a drive that leads to arguably the best soliloquy of the series:

Who are you talking to right now? Who is it you think you see? Do you know how much I make a year? I mean, even if I told you, you wouldn't believe it … No, you clearly don't know who you're talking to, so let me clue you in. I am not in danger, Skyler. I am the danger. A guy opens his door and gets shot and you think that of me? No. I am the one who knocks!

Fans of this powerful speech may have forgotten that when it was delivered, Walt had just escaped a long stretch of degrading servitude – and yes, danger – at the hands of Gus Fring.

“Say my name,” White says to a meth distributor, completing the process of ending his seemingly endless period of humiliation and near enslavement. Walt’s denial of this humiliation—his refusal to admit it even happened—leads to his final run of hubris and his inability to leave the meth business behind. As with his real-life contemporaries, there is never enough money, enough power, enough ego gratification, to satisfy Walter White.

Viewers who watched the final episode of Breaking Bad didn’t realize they had already seen Walt die. Walter White didn’t die from a gunshot wound, lovingly caressing a piece of equipment in the meth lab. He died the day he left for New Hampshire, because that’s the day his business continued to exist without him.

The title of the last episode was “Felina” (an anagram of “finale”). It’s also the name of the woman in Marty Robbins’ song “El Paso,” in which a fugitive cowboy returns to see the love of his life one last time, even though he knows he’ll die in the attempt:"One final kiss and Felina, goodbye…."

The cowboy couldn't live without Felina, his love. But Walter White, American CEO, couldn’t fully love a human being. In a flashback to his romance with fellow chemist and future billionaire Gretchen Schwartz, a dialog about the chemical components of a human being ends this way:

Gretchen: What about the soul?
Walt: The soul? There's nothing but chemistry here.

Walt’s true love was his business and his product. His days in that snowbound cabin were a kind of hellish afterlife, because without his business Walt is no longer alive.

Walter White tied up the loose ends in his life before dying as he wanted to die. That, more than anything else, separates him from his CEO peers in the real world. As some of them are starting to learn, in real life it’s not always that easy to close the door on the misdeeds of the past.