Pick of the week: Two stars ride out the apocalypse in Alfonso Cuarón's gorgeous but calculated space adventure 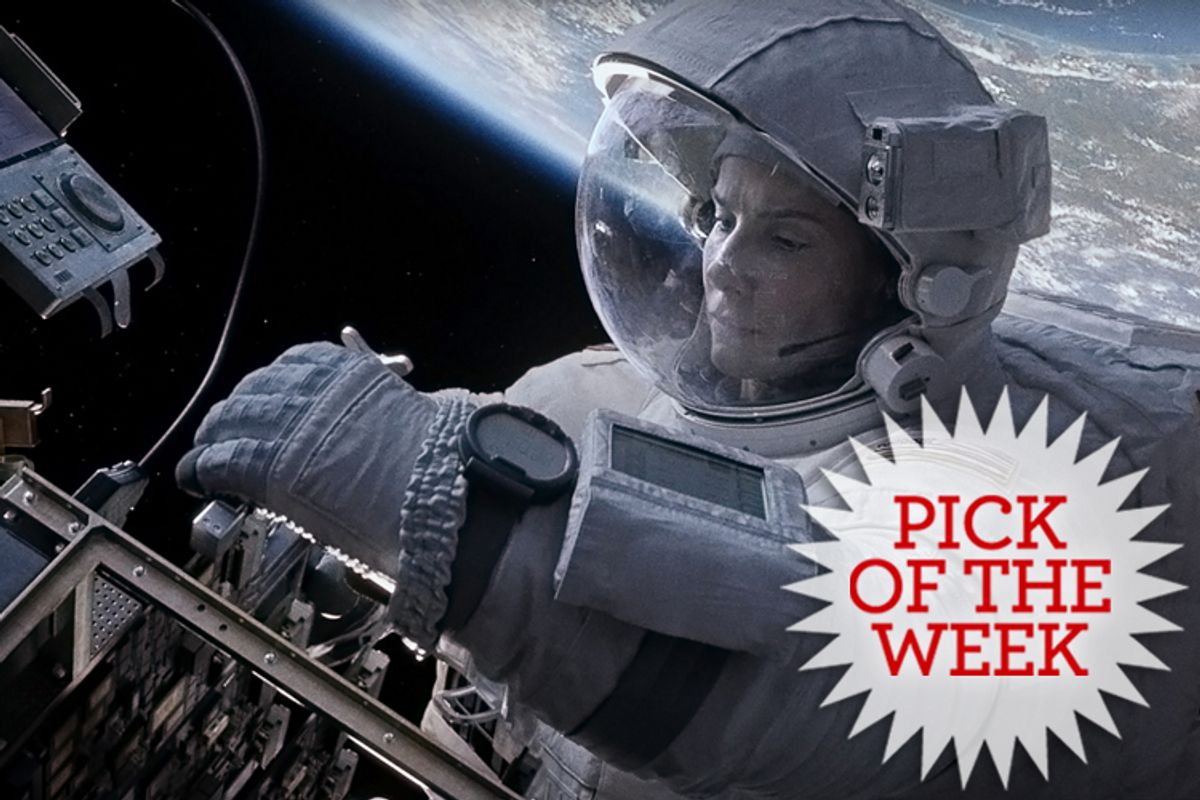 Alfonso Cuarón’s breathtaking outer-space adventure “Gravity,” with Sandra Bullock and George Clooney as a pair of astronauts marooned amid an apocalyptic application of Murphy’s Law, is without question the film of the week and one of the most important films of the year. It strives to bring cinema’s past, especially the rip-roaring, edge-of-the-seat thrillers Hollywood used to make, into its technological, weightless, oxygen-free future. It’s a film made in 3-D that very nearly justifies that overused, overhyped and largely unnecessary cinematic process, and a film made almost entirely with computer graphics – in many scenes, the only non-CGI elements are Bullock and Clooney’s faces – that is intimate, absorbing and fueled by human emotion.

I look forward to seeing this gripping and spectacular movie again, and even more to the discussions we’ll get to have after more of you have seen it. But I have to admit – you knew there was a “but” coming, right? – that on first viewing “Gravity” feels like slightly less than the sum of its magnificent parts. Cuarón, the inordinately talented Mexican director who hasn’t made a full-length feature since his science-fiction masterwork “Children of Men” seven years ago, is going for the devil’s candy here, the magical combination of artistic credibility, cutting-edge craftsmanship and commercial success. Riveted as I was by the saga of Dr. Ryan Stone (Bullock) and debonair veteran astronaut Matt Kowalski (Clooney), adrift in orbit after their craft is destroyed by runaway space junk, I also became increasingly aware of the intense calculation at work in “Gravity.” The entire movie is a Rube Goldberg machine of disaster, a roller coaster ride of cascading calamity that becomes hilariously overstated by the time we reach the ludicrous concluding sequence. (Which I want to discuss more, but won’t.)

You may well ask what the Sam Hill I’m complaining about. Cuarón has made no secret of his goal, which was to summon up the visual and metaphysical tradition of space-travel classics like Stanley Kubrick’s “2001: A Space Odyssey” and Andrei Tarkovsky’s “Solaris,” while translating it into an idiom that a 21st-century mass audience can understand. If the results feel something like an eye-popping 3-D video game, where we hurtle along in space next to Kowalski and Stone, in search of a way to survive against astronomical odds, I don’t think many viewers will complain. Please slow this movie down! We wanted something more contemplative! No, not even I think that is likely, or desirable.

I suppose the title of “Gravity” -- which was written by Cuarón with his son, Jonás – has a witty or ironic resonance. As Cuarón, ace cinematographer Emmanuel Lubezki and their enormous visual-effects team capture in eerie, convincing fashion, Stone and Kowalski are beyond gravity in the ordinary sense of that word. Exhilarating, stunning and sometimes panic-inducing, this film’s visual framing is unlike anything ever accomplished in the movies before. Up, down, right and left no longer have meaning for these two human beings lost at the outer edge of Earth orbit. (Those with motion-sickness issues may need to take appropriate medication.) At the same time, the gravity of that big, beautiful blue orb below and/or above them is both their only hope and their biggest threat. It keeps them from drifting away into absolute nothingness, and it ultimately promises to pull them in and burn them to cinders.

Of course the two astronauts will likely be dead for other reasons long before that happens. Few if any outer-space movies have captured the immense emptiness of the void the way “Gravity” does, or the absolute silence. In “Star Wars” and “Star Trek” shootouts, spaceships explode with prodigious bangs, but when the tide of lethal space debris arrives in “Gravity,” it does so without a sound, which turns out to be far more terrifying. We only get the briefest of explanations from Mission Control in Houston (the voice is Ed Harris, surely a nod to both “Apollo 13” and “The Right Stuff”): The Russians tried to shoot down one of their own satellites with a missile, but the whole thing has gone horribly sideways, scouring orbital space with deadly scrubbing bubbles and bringing down the globe’s communications networks. Yeah, this is a movie about the apocalypse, or at least a mini-apocalypse, with only two characters. After the man-made asteroid belt comes through, Houston falls silent and Stone and Kowalski find themselves alone in their spacesuits, with limited oxygen, no food or water, no one to talk to and no obvious way to get home.

Character development really isn’t the point here – they’re lost in space! – but both Clooney and Bullock play to type. Kowalski is chatty, flirtatious, immensely calm and competent, and untroubled by the prospect of imminent death. I enjoyed him a lot; sometimes Clooney's at his best when he appears not to be working hard. Stone is a medical specialist on her first space mission, a brittle and businesslike loner (with a boy’s name, as Kowalski points out) haunted by a personal tragedy she will have to get past, rather too formulaically, if she wants to get back to Earth in one piece. To talk about their relationship any further would be bordering on spoiler territory, so let’s just say that both actors give compact and resourceful performances, doing their utmost to lend a human heart to a film that’s mostly about amazing images and tremendous forward (and/or downward) momentum.

To have any hope of survival, Stone and Kowalski must find a way to get from their disabled shuttlecraft to the International Space Station – and then onward to another spacecraft after that. As a real-life astronaut has pointed out, although much of the film’s portrayal of spaceflight is exacting, this isn’t a remotely possible scenario. I didn’t know that going into the movie, and I’m not entirely sure I care. That knowledge does, however, augment my sense that Cuarón is desperately searching for an escape hatch throughout the tremendously exciting first hour of “Gravity” – a secular equivalent to the spiritual or supernatural dimension found in Kubrick’s and Tarkovsky’s great space movies. While the tension never lets up for a second, how you respond to the boundary-fudging and wildly improbable ending of “Gravity” – meaning both how it makes you feel and how you interpret it – will determine whether you think the movie is a genuine pop masterpiece or a canny artifice. Maybe there’s no difference.