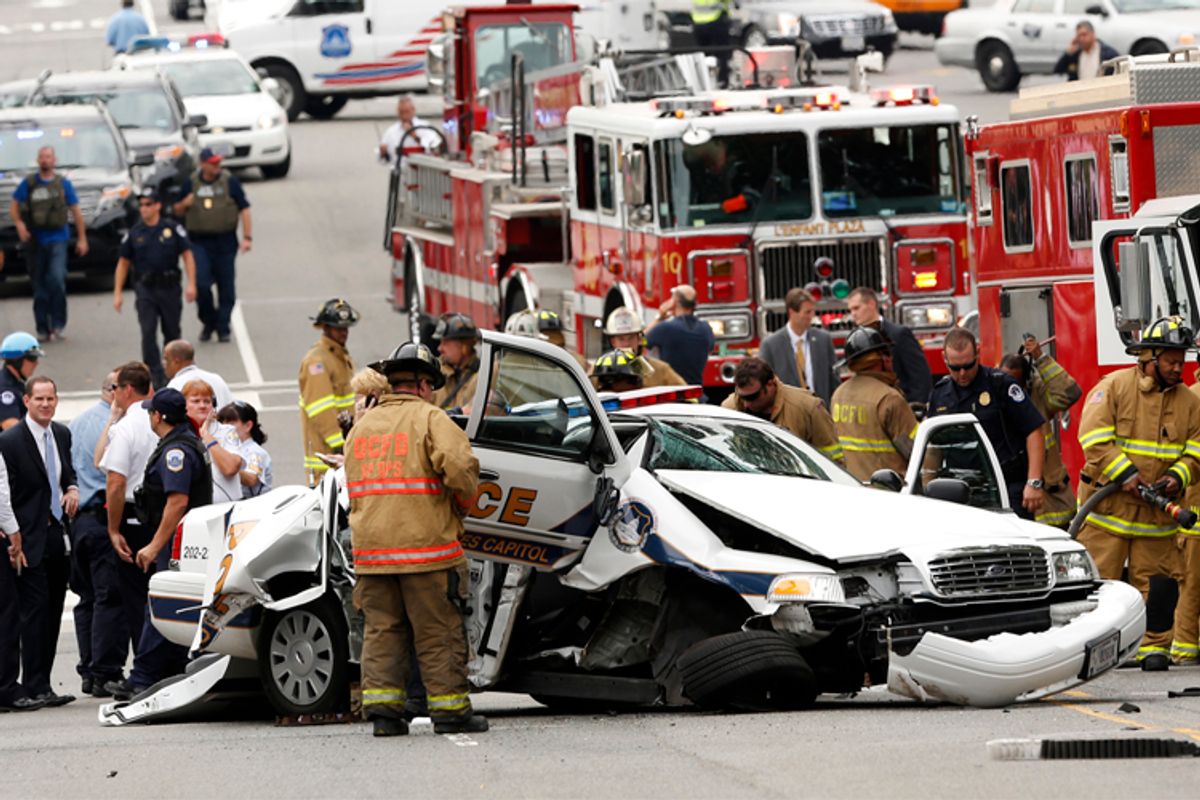 Updated: 5:46 p.m. Numerous sources are reporting that the woman who led the police on the car chase was killed by police today. She was unarmed according to CBS and other sources. [embedtweet id="385882761586049024"]   @nbcwashington: CONFIRMED: All shots in today's incident came from police http://bit.ly/18VghZR

Updated: 4:59 p.m. The Sunlight Foundation has a list of the tweets politicians deleted during the shooting incident. Here's one from Sen. Ted Cruz: Senator Ted Cruz (R) @SenTedCruz Again, Harry Reid has shot down funding for the VA and national parks: http://t.co/EthnWhxtHe No doubt -- this is #HarryReidsShutdown http://politwoops.sunlightfoundation.com/ Updated: 4:36 p.m. The press conference has been delayed. We still don't know anything about the female suspect or why she had a child in the car. Updated: 4:33 p.m. Here's video of the car chase:

And, apparently, a photo of the final standoff, via Buzzfeed's Andrew Kaczynski:

Updated: 4:16 p.m. Though the House of Representatives remains in session Senate Majority Leader Sen. Harry Reid has adjourned the upper house. Updated: 4:08 p.m. According to the New York Times, it's unclear whether she was attempting to breach White House security or just hit a barricade. Updated: 4:00 p.m. Another press conference will be held in about 15 minutes. Updated: 3:59 p.m. [embedtweet id="385856081051664385"] Updated: 3:49 p.m. While numerous people reported hearing shots it's not clear if anyone was shot. The child who was in the car with the female suspect has been taken to the hospital. [embedtweet id="385851138203209728"] Updated: 3:48 p.m. The House is back in session and is continuing with the usual business. NBC is reporting that the injured police officer was wounded in a car crash related to this incident, not shot. Updated: 3:40 p.m. In a press briefing the chief of the Capitol Hill Police said there was no indication of terrorism, by which he probably means organized by a terrorist network. [embedtweet id="385850971462828032"] Updated: 3:33 p.m. [embedtweet id="385848968007397376"] Updated: 3:31 p.m. Here's the car the suspect was reportedly driving: [embedtweet id="385848846573514752"] Updated: 3:28 p.m. NBC is revising its earlier report to say the suspect, a female, might have been wounded in a car crash, not a gun shot. There's still no word on who she is. Updated: 3:25 p.m. Conspiracy theorist Alex Jones predictably sees a "false flag" “Shots fired, U.S. Capitol. Oh, they’re – they’re pulling a big distraction on us,” Jones opined seconds after the news of the shooting broke. “Look for ‘em to stage a bunch of stuff.” Updated: 3:24 p.m. [embedtweet id="385847023574188032"] Buzzfeed's RosieGray: Tim Griffin tells me he "agrees that the timing was not helpful" on tweet that appeared to blame Dems for shooting Updated: 3:23 p.m. NBC is reporting a sequence of events where a female suspect with a child in the car attempted to crash through White House security before racing towards Capitol Hill where she was shot. Updated: 3:20 p.m. A female suspect is reportedly in custody after being shot. Her condition and identity have not been revealed. Politico:

President Obama has been briefed on the Thursday afternoon security incident on Capitol Hill, a White House official said. "White House staff are in touch with law enforcement and monitoring the incident," the official said, referring other questions to the Secret Service.