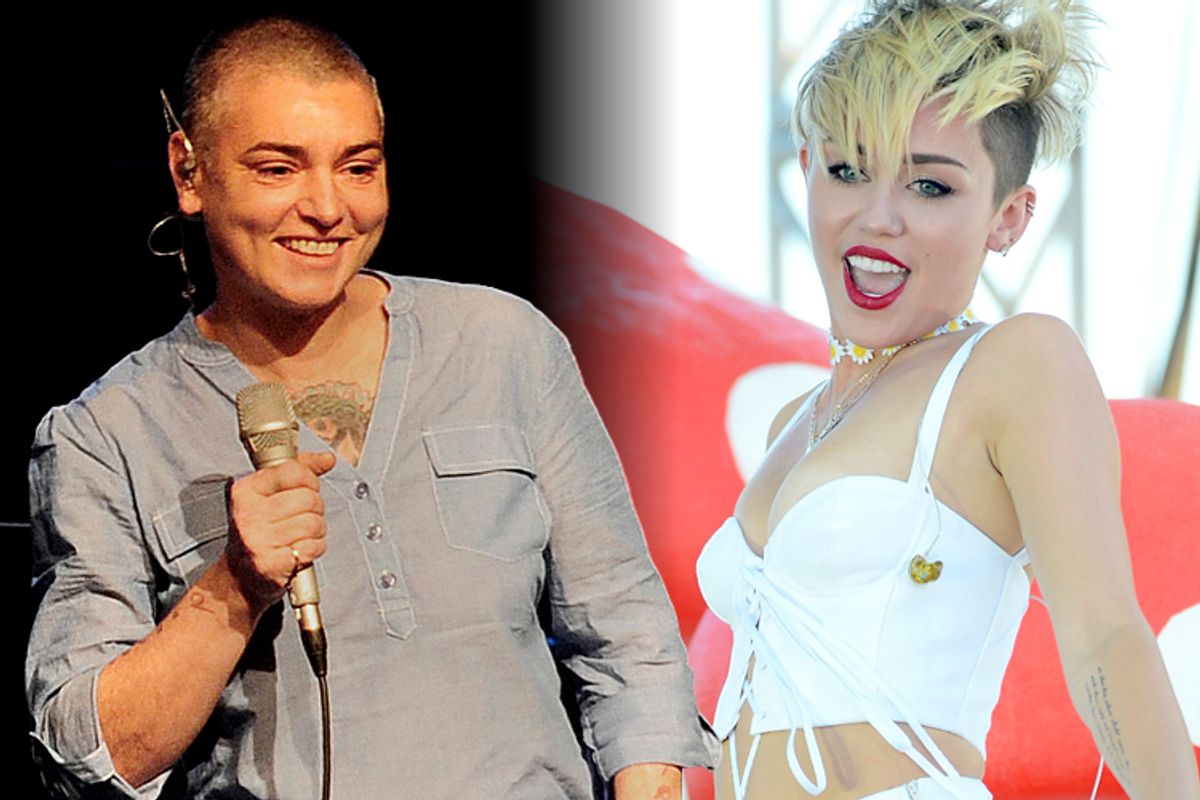 They both achieved global superstardom at a tender age. They've both courted controversy for their outspoken antics and dramatic haircuts. And on the cusp of one woman's appearance on the same "Saturday Night Live" stage that the other long ago infamously appeared on, a pop icon has a few words of advice for a young diva.

Yet despite all they have in common, you wouldn't necessarily assume that Sinead O'Connor would have a lot of thoughts about Miley Cyrus. Sure, every other human in show business and the media has already weighed in on the former Hannah Montana, in a seemingly obligatory parade of punditry. But the Irish singer, who has kept a decidedly low profile in recent years, would at first glance seem impervious to the tongue-thrusting shenanigans of a former Disney star. In an open letter posted on her website, however, O'Connor, spurred by the recent comparisons of Cyrus' tear-stained "Wrecking Ball" video to her own iconic "Nothing Compares 2 U,"  has reached out "in the spirit of motherliness and with love."

In her letter, the eternally straightforward O'Connor doesn’t mince words, warning Cyrus that with her heavily sexualized current image, "you will obscure your talent by allowing yourself to be pimped" and "exploited," and "send across the message that you are to be valued (even by you) more for your sexual appeal than your obvious talent." She goes on to say, "The music business doesn’t give a shit about you, or any of us. They will prostitute you for all you are worth, and cleverly make you think its what YOU wanted. And when you end up in rehab as a result of being prostituted, 'they' will be sunning themselves on their yachts in Antigua, which they bought by selling your body and you will find yourself very alone. ALL of them want you because they’re making money off your youth and your beauty."

O'Connor has throughout her career cultivated an authority-flouting image that Cyrus has admittedly taken inspiration from. But though the elder songstress unquestionably owed a degree of her early fame to her own striking beauty, she also defiantly refused to play the role of pop sexpot in her heyday. She knows how easily that can be leveraged – and how swiftly it can be forgotten. She tells Cyrus that now "I do not find myself on the proverbial rag heap now that I am almost 47 yrs of age, which unfortunately many female artists who have based their image around their sexuality, end up on when they reach middle age." Yet even O'Connor has incited the outrage of fans for growing older and less sexy. Two years ago, she made shocked headlines for appearing at music festival looking not like her 20-year-old self but a middle-aged mother of four. The horror!

On Thursday, the Independent chided O'Connor for her chiding, noting, "Has O'Connor forgotten that she was once just as controversial?" as if all controversies were one and the same, whether they're ripping up a picture of the pope or dry humping demolition equipment in the nude. (Hint: They're not.) And the tone of the letter is unmistakably schoolmarmish. O'Connor's letter will likely not have much effect on Cyrus, whose current Twitter avatar is a photo of her sudsed up in a shower. She will probably not take O'Connor's advice to "Kindly fire any motherfucker who hasn’t expressed alarm, because they don’t care about you," or rethink her fan base of "every spunk-spewing dirtbag on the net." Nor does Cyrus have any obligation to. She's a young person clearly in the throes of exploring her identity and experimenting with rebellion and envelope-pushing -- all things that O'Connor is well acquainted with. She's following a radically different path, to be sure, but it's hers to tread.

Yet the points O'Connor makes about the parasitic nature of the music industry are refreshingly frank and piercingly on the money. A famous young woman is free to lick any sledgehammer she wants, and she may be exercising her creative vision while doing so, but it doesn't change the fact that a whole lot of music executives who couldn't care less about her as an artist are getting rich off that sledgehammer licking, and it doesn't change all the spunk spewing it provokes.

As Cyrus has amply demonstrated in recent weeks, it is laughably easy to get attention. And when you're young, sometimes that's all you desire. But as O'Connor notes -- when not warning Cyrus repeatedly about turning into a prostitute – Cyrus actually has the talent to build a sustainable career on something other than her nudity. One day she too will be a 47-year-old woman, and the choices she makes now will determine whether she'll be remembered for her body of work or just her body. It's her choice, but she could do worse than consider the words of a woman who's been there.