Blame game: The right-wing media on the government shutdown

The right explains how the government shutdown, which is awesome, is totally Obama's fault 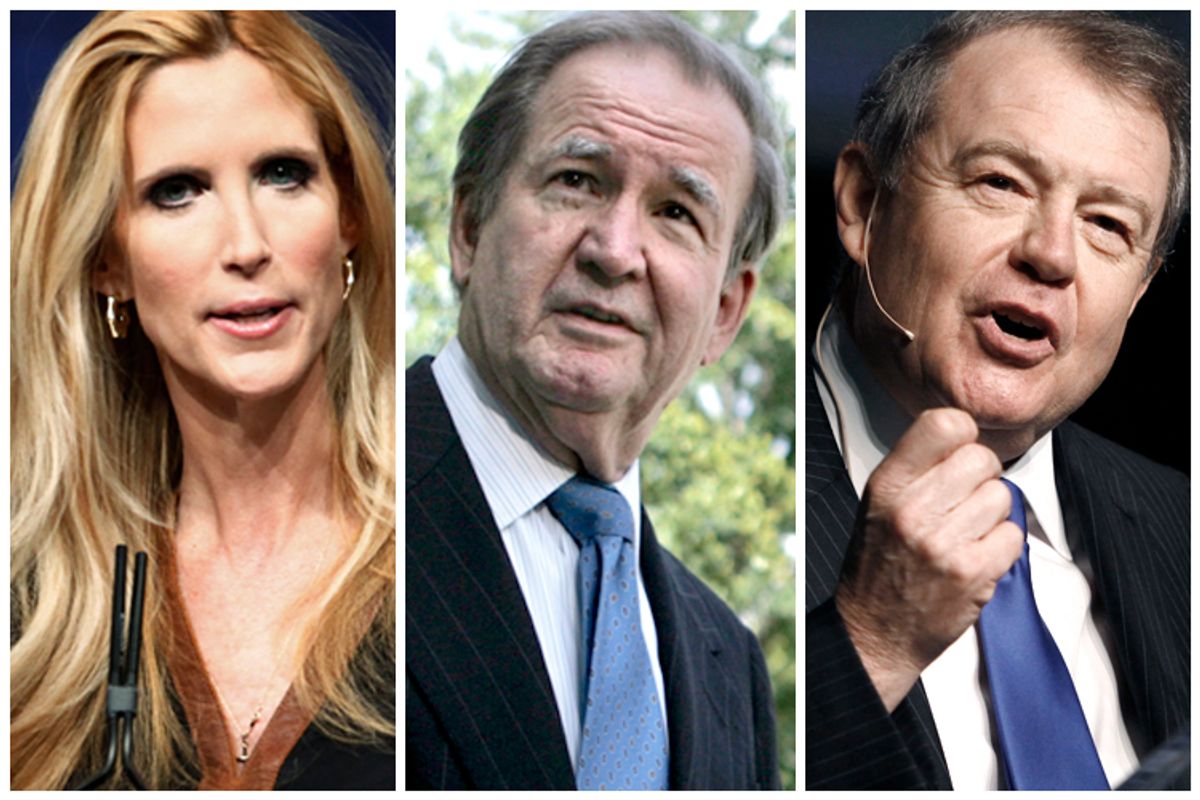 The right-wing media may be loving the government shutdown, but that doesn't mean they're willing to assign credit for it to Republicans. On the contrary, the overriding message to be taken from the right's coverage of the shutdown is that it's an awesome liberation from Big Government, a political win-win for Republicans, and totally, entirely, without question all President Obama's fault.

Ann Coulter, for example, appeared on Sean Hannity's Fox News show and criticized the president for what she claimed were politically motivated park closings. From the Daily Caller:

[T]hey are trying to shut down privately-run areas,” Coulter said. “All of these privately run park areas that have not only never been shut down before, but take no federal money — they pay money. They pay rent to the Treasury and they’re not losing money. They’re not furloughed government workers. We’re going to be paid. This is absolutely 100 percent political. It’s like when Obama said, no White House tours for the sequester and then instantly uses Air Force One to fly his dog up to Martha’s Vineyard. Normally I don’t comment on things like that. There is enough other things to complain about … he’s doing this to punish people so that he can blame Republicans when it’s 100 percent the Democrats.

Coulter didn't focus entirely on the negative, however. She also took time to explain why the shutdown was a good thing for conservatives. After claiming herself to be usually opposed to shutdowns, Coulter gave her three reasons for why, this time, she welcomed one. From the Daily Caller:

“Number one — this abomination of Obamacare which is already a disaster,” she continued. “We should talk about that. Number two — it’s Ted Cruz and Mike Lee and not Newt Gingrich running at this time. And number three and the most important — we have part of the media now. There was no Fox News in 1995. Nobody was on the Internet. Talk radio wasn’t as big as it is now. And if you look at the polls even with 100 percent of the non-Fox media pushing the idea that it’s Republicans, Republicans, Republicans — in 1995 the gap between the public blaming Republicans versus Democrats was 23 points. This is according to the CBS poll. It’s only nine points. We’re talking more about Obamacare and it will go down even more.”

For his part, Pat Buchanan weighed in on Sean Hannity's radio show by calling Obama a "savage partisan" who was enforcing a "genuinely sadistic" shutdown strategy. More from the Daily Caller:

"I think even many of the president’s supporters, at least some of them, will candidly admit he’s among the most partisan presidents we’ve ever had,” Buchanan said. “And the relationship between the Republican House and the Republicans in the Senate and the White House, and the fact he didn’t meet with [Senate Minority Leader Mitch] McConnell for 18 months, I think that president is becoming quite frankly becoming increasingly a savage partisan. What he is doing in this debate and this argument, however, I think is genuinely sadistic.”

“To go out there yesterday and suggest, you know maybe we’re going to default and rattle the markets where they plunge today, to have his aides call over there at the Park Service and tell them not to let the veterans visit the World War II Memorial when they’re on honor flight — their last chance in this life to meet and honor the guys with whom they served and to visit the memorial, which belongs to them — what kind of mind would do that?”

Like Coulter, Buchanan stated the shutdown was soon to prove to be to the Republicans' benefit. In the Daily Caller's words, Buchanan indicated Obama was "playing into Republicans' hands."

While both Buchanan and Coulter described the human costs of the shutdown in sympathetic terms, not everyone on the right was so full of fellow-feeling. Stuart Varney of Fox Business chose a different path, explaining that, when it comes to the more than 800,000 furloughed federal employees, he wanted to "punish these people." From Media Matters:

No, I don't think they should get their back pay, frankly, I really don't. I'm sick and tired of a massive, bloated federal bureaucracy living on our backs, and taking money out of us, a lot more money than most of us earn in the private sector, then getting a furlough, and then getting their money back at the end of it. Sorry, I'm not for that. I want to punish these people. Sorry to say that, but that's what I want to do.

But despite their differences on whether those affected by the shutdown deserved their fate, Varney, Buchanan and Coulter were all on the same page when it came time to assign blame. "You want my opinion? This is President Obama's shutdown," said Varney. "He is responsible for shutting this thing down; he's taken an entirely political decision here."