Stephen King was right. The Wendy Torrance in Kubrick's adaptation is needlessly shrill and stupid 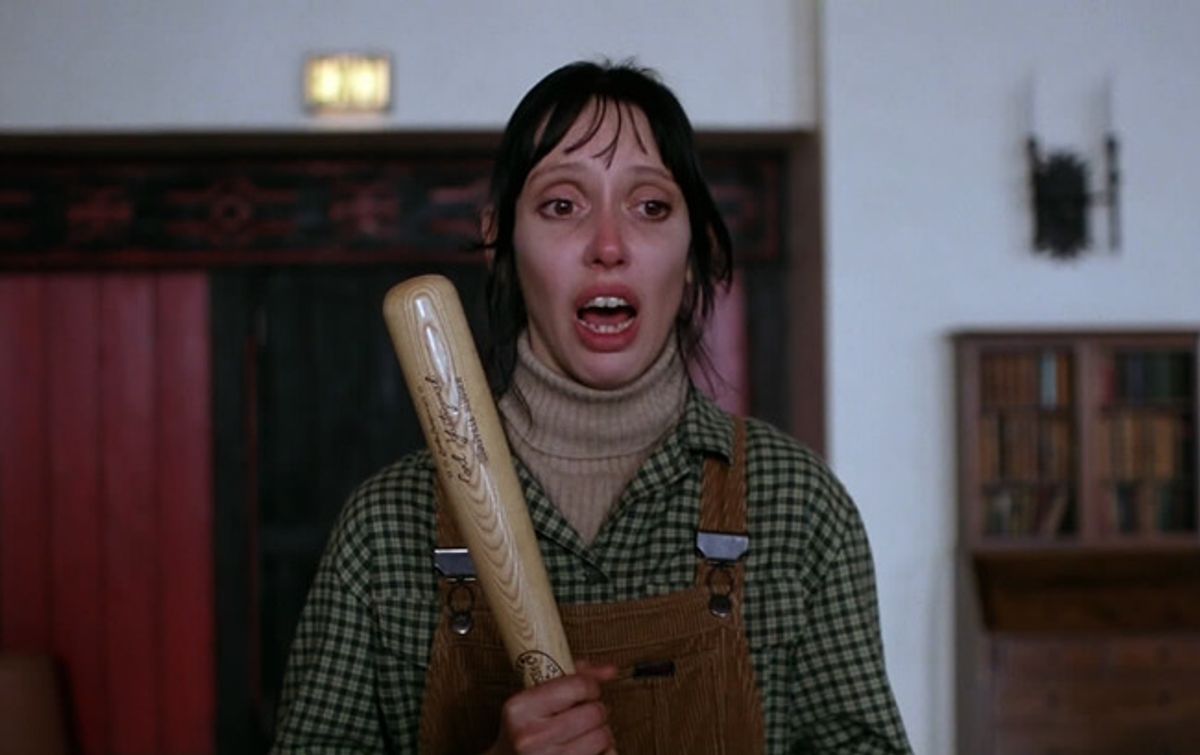 Scene still from "The Shining"
--

With Halloween weeks away, we're likely to find ourselves inundated with ads for haunted houses, stockpiles of candy in the aisles of Duane Reade, over-priced costumes in season-only Halloween stores and of course, scary movies.

Horror films aren't what they used to be. Nothing seems original anymore, but there's one theme that's been consistent in this genre over the decades: misogyny.

The epitome of terrifying, The Shining is one of cinema's most memorable movies. The scene where Jack Nicolson screams "Here's Johnny!" as he glares bug-eyed through a broken door at the terrified Shelly Duvall is one that most horror movie fanatics fondly remember as scary-as-all-hell. Based on the film adaptation, it's hard to remember Shelly's character, Wendy Torrance, as anything more than a prop and punching bag to the alcohol-fueled Jack Torrance, portrayed by Jack Nicolson. Throughout the film, Wendy is at the mercy of Jack and suffers emotional and physical abuse, the culmination of which occurs during the battle scene which Wendy survives.

The film, directed by Stanley Kubrick and adapted from the novel by Stephen King, deviated in its depiction of the novel's characters. In an interview with BBC last month, King admits that he's no fan of the film and that Wendy is "One of the most misogynistic characters ever put on film." He goes on to explain that she is "basically just there to scream and be stupid and that's not the woman that I wrote about." Kubrick's misogynistic mischaracterization of Wendy has unsurprisingly prompted misogynistic reviews of her character. Complex.com's Jason Serafino ranked Wendy at number five on a list of "The 25 Most Annoying Movie Characters," stating that, "It's not often that we urge — nay, beg — the killer in a horror movie to gut the main characters, but we make an exception for The Shining." Serafino's review of Wendy as a character transitions to critiques of Shelly Duvall as a person, who according to Serafino, "is just so whiny and dense as increasingly unstable Jack Torrance's wife that it makes it nearly impossible not to root for him to turn her into a lampshade for the hotel lobby."

(Hey, Jason, how long did you marinate that victim-blaming for until it was just offensiveenough? No, don't send me the recipe; I have an allergy to chauvinism.)

So who was the character King really created? For starters, Wendy had more dialogue in the book than in the Kubrick-directed film. While this can be confounded with the need to scale back on dialogue to preserve the plot and keep the film at a reasonable time, Wendy's portrayal in other adaptations was more closely aligned with how King wrote her, evidence that her character was written to contribute and be given more space than the film allowed. The Guardian's Catherine Shoard wrote that when the novel was adapted into a television series in 1997, it cast "Rebecca De Mornay portraying Wendy with a force and confidence more in keeping with the novel."

Novel-version Wendy has been described as "a brave, courageous woman whose heroics help save her son, herself, and Dick Halloran," Danny's friend and the chef at Overlook Hotel. While these qualities were lost upon Kubrick, King was purposeful and careful in his creation of Wendy, a selfless heroine who is forced to operate in a complex environment while trying to "balance staying alive, protecting her son, and trying not to utterly abandon her husband."

The novel version of Wendy continues to live in the shadow of her film-version self. How society depicts women in horror films isn't very different from how we're seen in the real world. We are often perceived as damsels in distress, waiting a real man to come along and save us. King's version of Wendy, a true literary icon, is more than just a horror film prop and accessory to Jack's madness. She's a heroine trying to save her family.