The Capitol Hill police shooting: What we don't know

Immediately after gunshots were heard, the story rapidly centered around an armed attacker. The truth was different 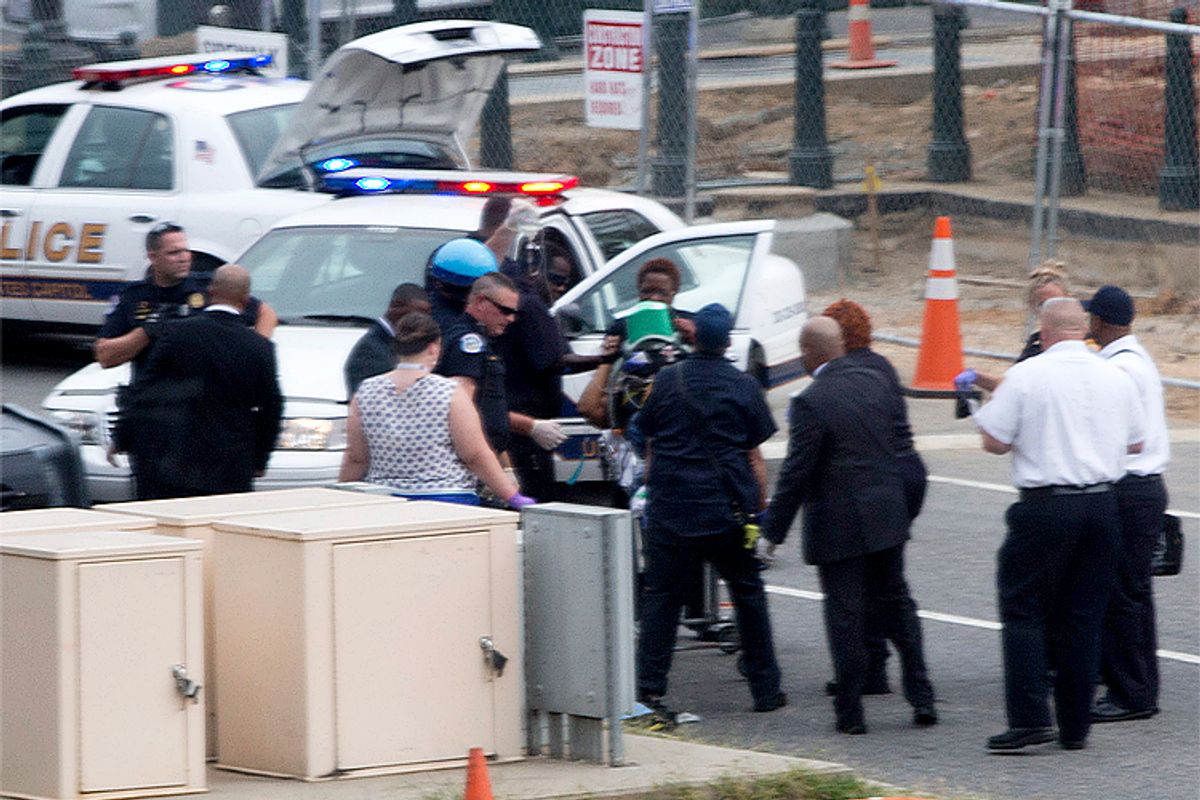 Emergency personal wheel off an injured person after a shooting on Capitol Hill in Washington, Thursday, Oct. 3, 2013. (AP/Evan Vucci)
--

Thursday's shooting in Washington caused widespread panic, an immediate media storm and a lockdown on Capitol Hill as police rushed to the scene armed to the teeth with assault weapons. Many details about the incident are yet to unravel, but here's one thing we know: This was no mass shooter, stalking the halls of government; quite the contrary. At base, what was originally reported as police taking down a shooter was actually a police shooting, in which an apparently unarmed woman with a child in her car was shot dead.

Here are the skeletal facts: A woman with a young child in her car attempted to breach a White House checkpoint on Thursday in a black sedan, leading to a high-speed chase through the streets of Washington that ended near the Capitol when police shot her dead. She rammed a police car and was shot by police without even exiting the car. The driver -- the woman to whom the car was registered -- is believed to be  Miriam Carey, 34, a dental hygienist from Connecticut.

Carey's mother has spoken to ABC and stated that her daughter was suffering from postpartum depression and a neighbor has said she was "absolutely" depressed. Carey's 1-year-old daughter is believed to be the child removed safely from her car after Carey was killed. ABC reported:

Idella Carey [Miriam's mother] said her daughter had "no history of violence" and she did not know why she was in Washington, D.C. She said she believed Carey was taking the little girl to a doctor's appointment today in Connecticut.

Dr. Steven Oken, her boss of eight years, described Carey as a "non-political person" who was "always happy."

"I would never in a million years believe that she would do something like this," he said. "It's the furthest thing from anything I would think she would do, especially with her child in the car. I am floored that it would be her."

However, fleshing out the narrative of a mentally unwell woman, Pete Williams reported on MSNBC Friday that Carey -- according to police -- suffered from delusions and believed the president to be stalking her. Mental health problems do not necessarily fully account for Carey's intentions Thursday -- what she was thinking while careening through the high-security D.C. boulevards we can never know.

But suffice to say, this incident surely doesn't belong in the sadly growing pantheons of mass shootings in this country. Rather, depending on what further developments emerge, it might be contextualized in terms of an equally abysmal history of trigger-happy police action leading to the death of a mentally ill individual.

Recall, for example, the incident in August last year when, in a frenzied takedown of a lone gunman outside New York's Empire State building, police gunfire injured nine people. The NYPD was responsible for every bystander injury, but the ringing of shots in the air prompted initial reports to claim a mass shooter was at work in midtown Manhattan.

On Thursday, too, the sound of gunshots on Capitol Hill did not prompt the assumption that the cops had their guns out: instead, the media began asking about "the shooter." But no weapons were found in the car. And many details still remain unknown.