What happens when right-wing media accept every illogical thing a Republican says? Logic gets thrown out the window 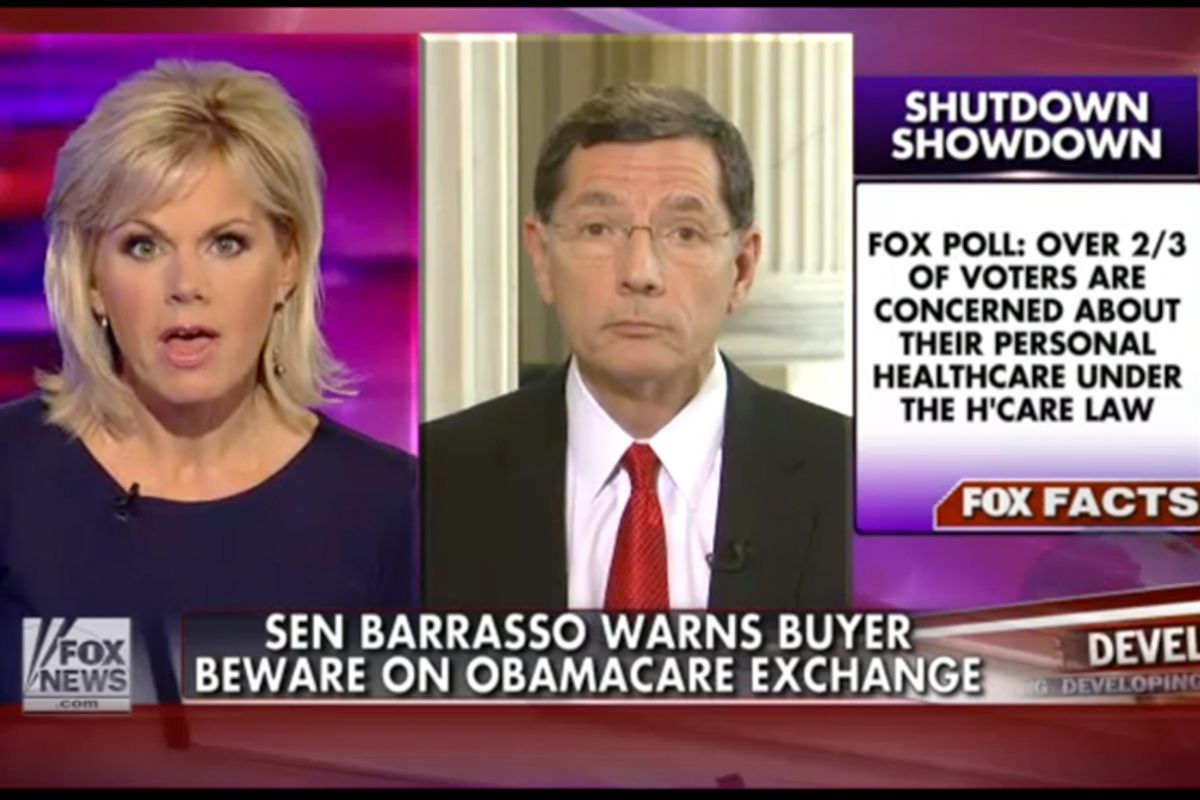 Fox News and the rest of the Republican-aligned press is making Republicans lazy. And that’s a problem.

The outcome of the shutdown fight won’t be determined by spin and cheap public relations tricks. The structure of the situation – which strongly favors the Democratic demand for a clean continuing resolution (CR) at the sequestration levels that Republicans wanted – will do that. That’s why polling indicates that more people are blaming Republicans for the problem.

But what we’ve seen in the first few days of the shutdown are a series of Republican attempts to spin things their way, everything from a 24-hour talking point last Sunday that the Senate wasn’t doing its work, to the battle of the World War II Memorial, to the series of mini-bills to open small, visible bits of the government that the House considered late in the week. With detours to “Harry Reid is in favor of cancer” and “Barack Obama says he wants the shutdown because he’s winning.”

The talking points were whirling around so fast that by midweek a handful of House Republicans wound up entirely unable to articulate what the fight was about, and giving ugly-sounding quotes. Indeed, some of them seemed to be arguing that the government had to be shut down over the principle that if the government was shut down, then select departments should remain open. Huh?

What all these talking points had in common, however, is that they were eagerly snarfed up by the folks at Fox News and other parts of the Republican-aligned press. The truth is that Republicans can pretty much say whatever they want, no matter what the bizarre logic and no matter what connection it has to what they were saying five minutes ago, and Fox News will totally accept it and blast it for hours or days.

The result? Republicans have become incredibly lazy. After all, why bother constructing a coherent argument if you don’t need one.

So why is it a problem? Well, for one thing, it means that it’s easy for Republican politicians to fall deep within an information feedback loop, not even realizing that what everyone within that loop is excited about is unpopular, or perhaps just irrelevant, to the other 80 percent or so of the nation. Or to put it another way: Benghazi!

That’s potentially bad for Republicans if they lose a bit of popularity that way, but it’s worse for the system as a whole, because the system depends on parties and their politicians trying to do things that appeal to voters. The problem here is that Republican politicians deep enough in the loop might not even realize that they are espousing unpopular or irrelevant ideas. After all, everyone they talk to, for example, is certain that Obamacare is widely hated and collapsing anyway; of course shutting down the government to get rid of it is a good idea!

That’s only part of it, however. Perhaps the even more pernicious effect is that even when they realize that they’re taking unpopular positions – even positions which poll badly among Republicans – they are tempted to go ahead anyway because, after all, as long as it’s a position that conservative talk show hosts will get behind then they can count on rank-and-file conservatives to go along.

Indeed, the ease with which they can achieve (apparent, but very visible) success with their spin operation probably contributes to making them lazy on substance. That very much fits in with the current disaster, which seems to have been caused by Ted Cruz and Mike Lee launching an initiative without thinking through what would happen, and then the rest of the party going along … also without thinking about what the next steps would be after Democrats, as anyone might have expected, rejected their demands. Why would any political party do such a foolish thing? Perhaps because they assumed that whatever mess they were in, as long as they could convince the gatekeepers of all that is “Truly Conservative” that they were on the right (so to speak) side, they were guaranteed good coverage.

Lazy spin, poor choices and terrible incentives: That’s what Fox News, Rush Limbaugh and the rest of the partisan media have given the Republican Party. It’s not a pretty sight.