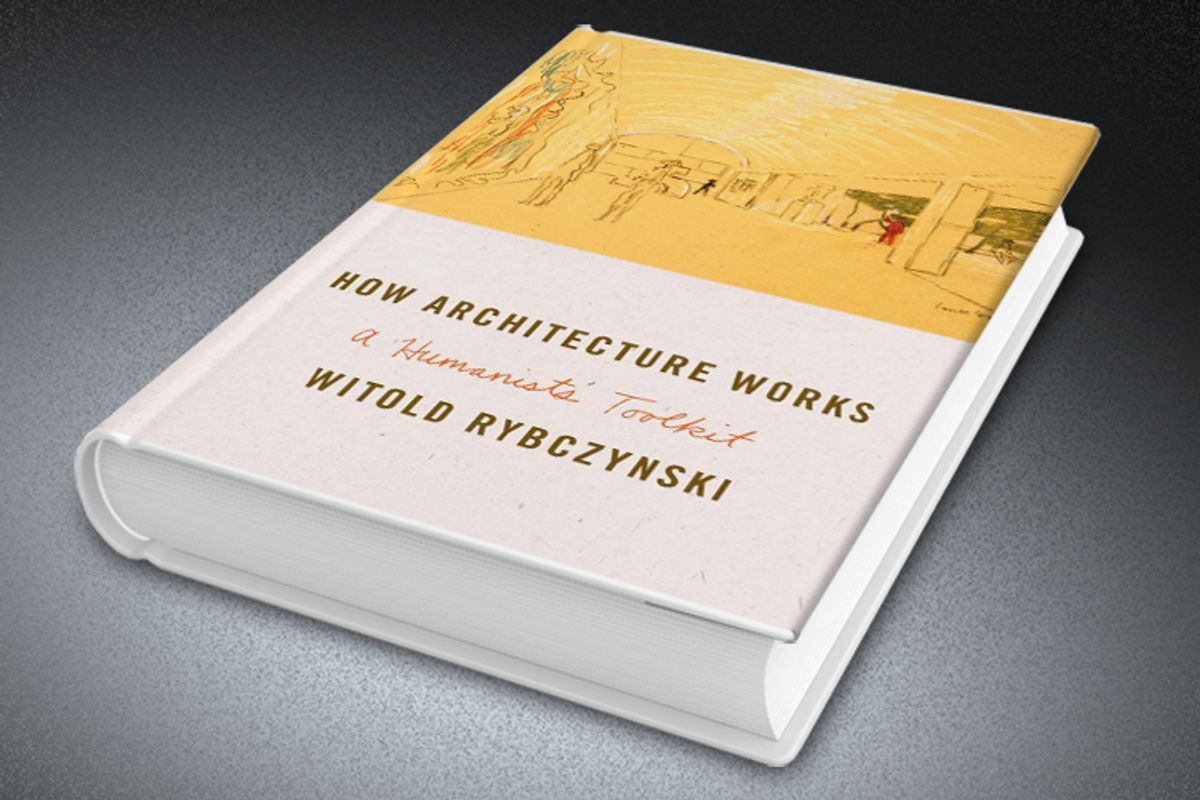 You would think architecture, the art form we live inside, would be the art we feel closest to. But in its modern incarnation -- the kind that gets written up by critics and praised by other architects -- architecture can seem forbidding and impenetrable. You don't have to be Prince Charles (a notorious modern-architecture skeptic) to stand before Jacques Herzog and Pierre de Meuron's de Young Museum in San Francisco's Golden Gate Park and feel you're in the presence of something oppressive and monstrous. Then again, if you simply turn around in the same spot, you can refresh your spirit with Renzo Piano's ravishing California Academy of Sciences, built only three years later.

The layperson couldn't find a better guide to this enigmatic terrain than Witold Rybczynski's "How Architecture Works: A Humanist's Toolkit." Despite the title (apparently inspired by literary critic James Wood's "How Fiction Works"), this isn't a book about how buildings stand up or the steps by which they're erected. Rather, Rybczynski, emeritus professor of architecture at the University of Pennsylvania and a celebrated writer on the subject, provides a tour of the factors every architect must consider when designing a building: site and setting (not the same thing, Rybczynski takes pains to explain), the plan, the skin, the style and above all the idea. For it is "an enduring truth" Rybczynski writes, that "great buildings are often the result of a single -- and sometimes very simple -- idea." "How Architecture Works," he explains, is "a conceptual toolkit for thinking about the experience of architecture."

Not all of the examples Rybczynski picks are modern; among others, he discusses the Pantheon, Christopher Wren's St. Paul's Cathedral and the villas of Andrea Palladio, iconic structures that influence architects to this day. But modern buildings are his primary focus, and that's just as well. They do seem to need more explaining.

Not that Rybczynski has much regard for what he sees as "attempts to impose intellectual theories on buildings" or academically driven schools of architecture "whose work is accompanied by long -- and often labored -- explanations." He describes himself as someone who "has lived through both the decline and resurgence -- in altered form -- of modern architecture," and he's not afraid to cast a jaundiced eye upon, say, Louis I. Kahn's paradoxical commitment to revealing the structure of the buildings he designed, even at the expense of their function. He thinks Frank Gehry's famous Guggenheim Museum in Bilbao, Spain, doesn't really work in its setting, but that Gehry's Walt Disney Concert Hall in Los Angeles does. Rybczynski has a lot of opinions without being doctrinaire, and his tastes are wide-ranging and omnivorous.

There are photos and illustrations in "How Architecture Works," but its intended audience will get a lot more out of it with the assistance of Google Image Search. I kept my iPad at my elbow whenever I opened the book, and that made it a much richer and more exciting (if also considerably more time-consuming) experience, whether I found myself agreeing with Rybczynski or not. The chapter on details, for example, looks at how several different contemporary architects handle balustrades (the railings on the edges of terraces or balconies) and banisters. Even though the chapter is well-illustrated, being able to see color photos of Bing Thom's facility for Simon Fraser University in British Columbia online helped me to see how his use of wooden handrails warms up the glass plates that form the guardrails. (The Internet also comes in handy if you're the sort of person who can never remember what a mullion is.)

The same chapter on details will dishily inform you that Rybczynski regards cable railings as a "cliché" and "affectation" and that he suspects "many architects simply like the technical-looking hardware" cables require. "How Architecture Works " is full of both fascinating shoptalk and enlightening articulations of the vague sensations many of us have when confronted with innovative work. Rybczynski notes that calling-card buildings like Richard Meier's severely modernist Rachofsky House "says all it has to say from a distance," but "at the most intimate scale," such structures "tend to keep the user at arm's length ... The swirling metallic skin of the Disney Hall seen up close has nothing further to reveal, any more than [Rem Koolhaas'] Seattle Public Library's glazed lattice. Look closer and all you see is caulking." Rybczynski can admire the austerity of the Rachofsky House while appreciating that the ornament used on more traditional buildings (an anathema to classic modernists) can register as "humanizing." Elsewhere, he proposes that architecture's long history of stylistic revivals "curiously parallels" the history of typography and ruminates on famous architects' wardrobes.

"How Architecture Works" is the sort of book that might have been produced as an app or enhanced e-book a couple of years ago. No need: The Internet makes a better companion. Rybczynski writes so eloquently of the work of the Finnish modernist Alvar Aalto (clearly one of his favorites), that he launched me on an eager, meandering online exploration that could never have been encompassed in a single volume, print or digital. There was a time, not so long ago, when you'd hear self-styled prophets insisting that the books of the future will need to be multimedia productions to retain any readers at all. That's the problem with demanding novelty for its own sake; nothing gets old faster than the merely new. But the beautiful and the useful, in buildings as well as books, never becomes obsolete. Neither do writers like Rybczynski, who can teach us how to recognize and appreciate both.