Before the meltdown: The surprising roots of Paula Deen's career

Believe it or not, Deen's rise was based on bringing people together -- on comfort food after Sept. 11 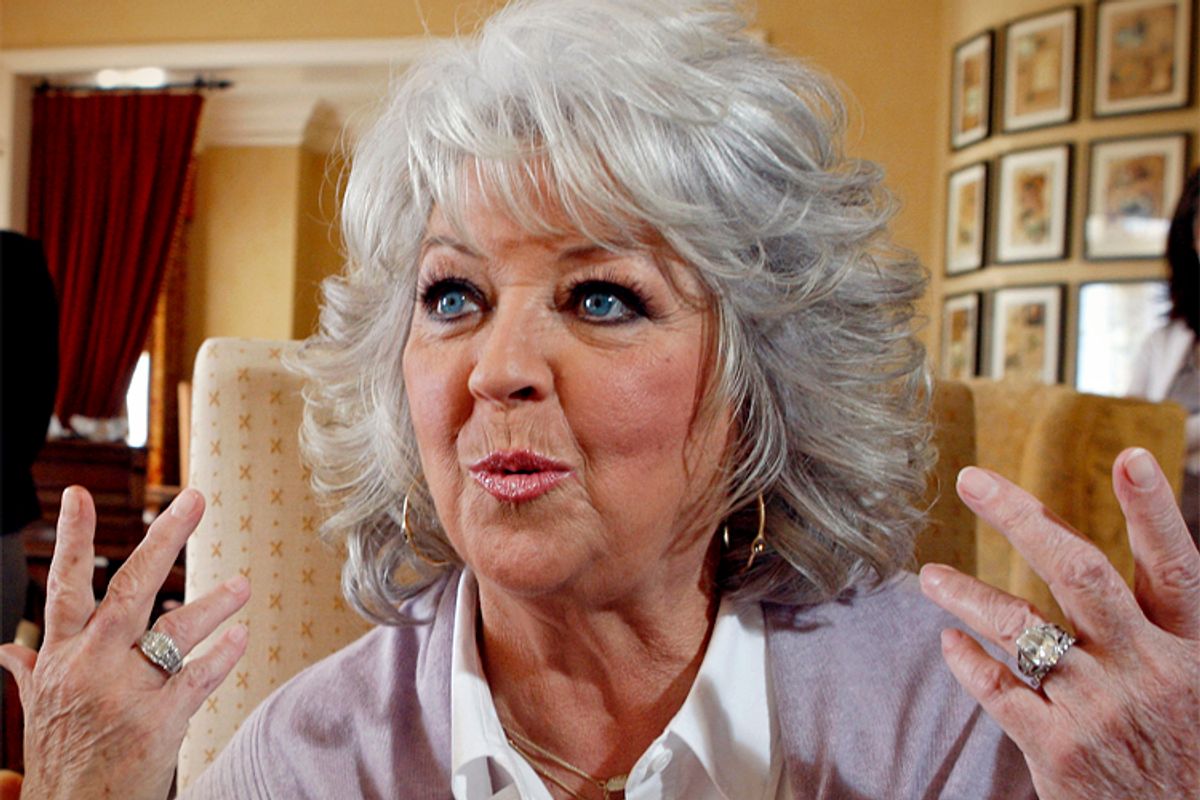 Excerpted from "From Scratch"

A decade earlier, Paula Deen, fifty-two, had rebuilt her life. After her father had died at forty following heart surgery and her mother at forty-four from cancer, she’d been beset by panic attacks. For years she had barely left her house. It was only in 1989, after she divorced her alcoholic husband, that Paula had found the strength to start a catering business (on $200 in savings) and eventually break her phobia. The business was called The Bag Lady. She would wake at 5 a.m. and make 250 meals in her kitchen—ham salad sandwiches, banana pudding, fruit salad—and her then-teenaged sons would deliver them to local businesses at lunchtime. That led her to open a restaurant in Savannah, Georgia, called The Lady & Sons, which became a huge success. In 1997, she had self-published a cookbook featuring the not-entirely-wholesome recipes she served at The Lady & Sons, like fried chicken battered with egg and self-rising flour, and butter cakes made with Duncan Hines yellow cake mix, butter, cream cheese, and a box of powdered sugar. One day, Pamela Cannon, an editor at Random House who was visiting Savannah, ducked into Paula’s restaurant to escape a thunderstorm and noticed the cookbook. Random House paid Paula a $7,500 advance to publish a polished version of it and added a foreword from Savannah writer John Berendt, author of "Midnight in the Garden of Good and Evil": “Ms. Deen is an irresistible example of that extraordinary phenomenon of Southern womanhood, the steel magnolia,” Berendt wrote. “She is always appealing and gracious but possessed of an unfailing survival instinct—a necessary trait for a Southern cook to make it.”

A vivacious, heavy-set former model with bouffant white hair and blue eyes, Paula had an inner will and energy most people don’t have at twenty-two. She could get people talking about anything one-on-one, and also could make an entire room laugh. Her family and friends had always said she was like Oprah Winfrey, but Paula had read Martha Stewart’s decorating and cookbooks in the late 1980s and was impressed at how seamlessly Martha’s business flowed from her life, how she’d turned her lifestyle into a business.

“I want to become the Martha Stewart of the South,” Paula Deen told [agent] Barry [Weiner] when they first met. “And I’ll work as hard as I need to to make that happen.” Paula was promoting her cookbook on QVC, and the two were having lunch at the Sheraton Great Valley Hotel in the suburbs outside Philadelphia, near the channel’s studios. Paula did not have a big team. Jamie and Bobby helped run the restaurant. Her public relations strategy consisted of walking the floor of the dining room every day speaking to customers.

Barry saw a sizzle in those steel-blue eyes and was charmed. He also was frustrated with his client Bob Vila, the home renovation star, who, Barry felt, was balking at cashing in big on his fame. In Paula, he saw a person with ideas like his own. He told himself there was something magical and magnetic about her, something alive at her core. Barry could work with this.

“You know what,” he said. “You’re going to be bigger than Martha Stewart. Why don’t we do it?”

Barry may have believed that Paula Deen was a great candidate to host a cooking show, but no one at Food Network or any other place seemed to agree. At meeting after meeting throughout 2000 and 2001, he heard excuses like, “She speaks Southern,” “Gray hair,” and “She’s not really a size two now, is she, Barry?” In other words: She sounds like a hick, she’s old, and she’s fat.

Barry had dealt with rejection plenty of times before. His client Peter Brennan had created "Judge Judy," featuring a former family court judge from Brooklyn who tartly dispensed justice and life lessons in a mock small claims court. When they were shopping the pilot, naysayers dropped uncouth dismissals—from the broad “Are you out of your mind?” to the bigoted “Who’s going to watch a show starring a loud-mouth Jew from Brooklyn?”

Doggedly, Barry had insisted, “You know most of the things that really worked well on TV were things that people never anticipated.” By 2000, Judge Judy, picked up in 1996, was profitably on the air nationwide in first-run syndication, breaking ratings records and earning Emmy nominations. The star, Judith Sheindlin, would build a fortune estimated at more than $100 million.

When Barry pitched Paula at Food Network, Eileen Opatut told him, “You just don’t get our business anymore.” Times had changed, she said. The network was trying to get smarter, not dumber.

Barry Weiner saw 9/11 not as a problem for Paula, but as an opportunity.

His office was near the Carnegie Deli, the landmark Theater District restaurant famous for its gigantic sandwiches: piles of pastrami and corned beef so rich they threatened to send most diners into a food coma. Many a tourist has been forced to cancel afternoon plans in favor of a nap after a battle with a Carnegie Deli sandwich. In the weeks after the tragedy, Barry noticed two things around Midtown. First, there seemed to be a funeral every two hours at St. Patrick’s Cathedral. Second, there was a constant line of 150 people waiting to get into the Carnegie Deli. The city’s fine-dining establishments were suffering, as were many other businesses in the city, but not the Carnegie.

He made an appointment to see [agent] Judy [Girard]. She had grown weary of him pitching Paula, but she respected Barry’s TV acumen.

“Judy,” he said. “Do me a favor. Walk home from work.” She and Barry happened to live in the same apartment building on West Fifty-seventh street. “I want you to walk along Seventh Avenue. And when you walk along Seventh Avenue, take a look at the Carnegie Deli. The only thing that might be a little unhealthier than fried chicken is corned beef and pastrami. I am willing to bet you that there will be at least ten times as many people outside waiting in line at the Carnegie Deli as there are in any of those so-called fancy restaurants that you believe your audience wants.”

Judy laughed at him.

He called her the next day. “Well?” She had seen the line.

“You know something,” Barry said, pressing his case, “one thing that we’ve all learned because of 9/11 is we’re all going to die. We know that. Whether we eat corned beef, or we don’t eat corned beef, or whether we eat fried chicken, or we don’t eat fried chicken, or whether we eat macaroni and cheese or we don’t, it’s not going to make a difference. But the fact is, you want to know something? We’re in a world right now where you see a funeral every three hours, you want to feel good. They’re not locals outside the Carnegie. Those are tourists from the Midwest. All of those people who you believe aren’t going to want these sorts of things are standing outside because they want to eat a three-pound corned beef sandwich, and they’re also going to watch Paula Deen on your network.”

Judy sighed. “Okay, come and talk to me.”

She relented enough to approve paying for two pilots for Paula, closely overseen by network staff.

Paula Deen shot the two pilots in Savannah, but the producers assigned to the show brought the network’s prejudices with them. They dressed her in cashmere and pearls. They tried to make her look like a refined Southern lady and coached her relentlessly. One pilot was called “Afternoon Tea.”

When Barry saw the tapes, he was appalled. This wasn’t the gutsy woman with an inner magic. This woman was cowed and bland.

Before Judy had a chance to see them herself, Barry went to her office. “Do me a favor,” he said. “You can’t watch the pilot.”

"You’re out of your fucking mind,” Judy said. “Why shouldn’t I?” “I’m telling you,” he said, “it’s the worst thing you’ve ever seen. So you don’t have to watch it just so you can tell me it’s the worst thing you’ve ever seen. I’m already telling you it’s really that bad, but it’s because you fucked it up. You sent all your people down there, and they didn’t allow her to be who she was! They tried to turn her into your version of what she should be in Savannah, Georgia. But that’s not it! Let her be who she is! Don’t gentrify her—and don’t bother looking at the show.”

If there was a lifetime achievement award for chutzpah, Barry Weiner deserved one. “We’ll do a show for you at cost,” he pressed. “Give me any time period, I don’t care where it is. You have nothing to lose! You have time periods on your network right now when nobody is watching. So you might as well let somebody not watch one of my shows instead of yours.”

After two hours, he wore Judy down. “Just get the fuck out of here,” she laughed. “You got thirteen.”

Months before the first of thirteen episodes of "Paula’s Home Cooking" aired, Paula fussed over TV critics at a promotional lunch in Los Angeles. She served them creamed corn and fried chicken and peered over their shoulders “to make sure you’re cleanin’ your plates.” The show’s debut in November 2002 was part of the still-chugging “Cooking School” block on Saturdays. Critics raved, notably those outside New York. “Her show is like watching your favorite aunt whip up a yummy banana split cake or lemon chess pie while you sip coffee at the kitchen table,” wrote Reagan Walker in the Atlanta Journal-Constitution.

Judy called Barry to thank him. The network’s programming had been too focused on the taste of the coasts, she said. It was like the famous New Yorker cover by Saul Steinberg where the city is the center of the Earth and everyplace else on the planet is a tiny sliver.

“You proved something to me,” she said. “You proved that we have an audience beyond the Hudson River. Thank you.”

Soon, endorsement offers for Paula were coming in, small things, regional brands. Barry told her to say no for now.

“But they’re offering cash money!” she said more than once. “We’re not doing it,” he said.

“What do you mean, we’re not doing it?” she asked, incredulous. “You said you wanted to be Martha Stewart,” he said. “We’re going to be bigger than Martha Stewart. If we take every offer now, all that’ll happen is it’s like you’re becoming a whore.” He told her to wait until the endorsement offers were for millions of dollars, not a few thousand.

“I hope you know what you’re doing,” she said. But she agreed to keep doing it his way.

Excerpted from "From Scratch: Inside the Food Network." Reprinted by arrangement with G.P. Putnam’s Sons, a member of Penguin Group (USA) LLC, A Penguin Random House Company. Copyright 2013 by Allen Salkin.