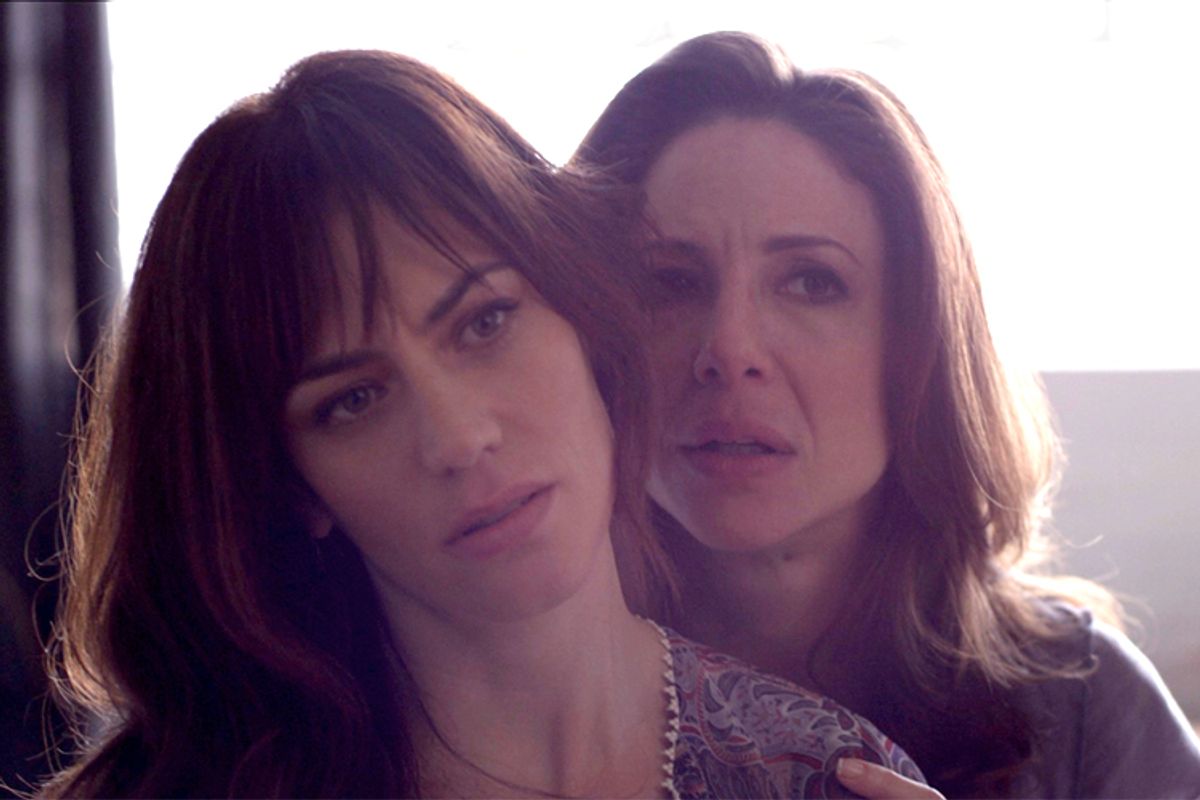 If Lisa Cholodenko’s hit movie “The Kids Are All Right” made the audience-friendly case that lesbian marriages are just as screwed-up and normal and loving and prone to breakfast-table spats as any other kind of marriage, writer-director Stacie Passon’s bracing and mysterious debut film “Concussion” is its devious twin sister. I could try to set up “Concussion” with a bunch of film-critic comparisons – it’s like an episode of “The L Word” co-directed by Lena Dunham and Alfred Hitchcock, with doses of “American Beauty” and Luis Buñuel’s “Belle de Jour” mixed in – but let’s keep it simpler than that. This ruthless, compassionate and ingeniously engineered portrait of upper-middle-class married life gone off the rails is one of the big American surprises of the year, and Stacie Passon is the real deal. Watch out for her, in every sense of the term.

Before we go any further, let’s pause to honor veteran TV actress Robin Weigert, who’s had recurring roles on “Sons of Anarchy,” “Life,” “Deadwood” and any number of other series and here gets a chance, at age 44, to anchor a film. To put it simply, OMFG. Weigert gives a towering performance as Abby, a housewife in a leafy New Jersey suburb (yes, of course it’s Montclair), married to a high-end (female) divorce attorney, who allows the entropy of her existence – and, yes, perhaps the aftermath of a head injury --to push her into an unlikely new career venture. It’s the acting breakthrough of the year in American cinema. Abby is the hero of this story, I suppose – we certainly feel every shift of her emotions – but she’s also the villain and the femme fatale and the tragic figure buffeted by fate, and she has no idea what she’s doing at least half the time. She’s desperate and deceitful, horny and insecure, contemptuous of her surroundings yet totally unwilling to give up the privilege she takes for granted. Maybe you’re not a lesbian housewife turned hooker, and apparently I’m not either. But Abby’s a lot like you and me nonetheless.

“Concussion” begins with the small talk among the lean, mean suburban moms on the stationary bikes at the gym. (Maybe those are “ellipticals”; I wouldn’t know.) One of the first lines of dialogue we hear is: “You know what they say, after you hit 40 you have to choose between your ass and your face.” It ends, or nearly ends, with an extended phone conversation about the difference between khaki, beige and “parchment,” as descriptors of paint or tiles or wallpaper or something. Abby actually walks out in the middle of that conversation, in tears, just in time to see her wife, Kate (Julie Fain Lawrence, handling a thankless role with grace), heading down the driveway in her Jaguar. Then Abby has a brief conversation with a married woman from her town with whom she’s been having sex, for money. Then she rolls the trashcan back to the garage. That might sum up the whole movie, right there.

Except that I wouldn’t want to leave you with the impression that “Concussion” is just a merciless satire of the formerly hip with way too much money, of the aesthetic and ideological prison that is affluent American good taste. It certainly is that: At least twice during the narrative, Passon takes a conceptual time out and sends David Kruta’s camera prowling among the impeccable details of Abby and Kate’s lovingly furnished family home, or the artier Louise Bourgeois replicas and feminist posters of the Manhattan loft Abby is renovating. Why does Abby stay in her sexless, passionless, business-partnership marriage with Kate? I mean, sure, they have two kids and all, but since when did that stop anybody? I have two words for you: Wraparound porch. (Unless that’s three words.)

But first of all, I would describe the tone of “Concussion” as more observational than flat-out mean. Here is the world as we have remade it, O liberals: How’s that working out? There’s also something anarchic, joyous, angry and insurrectionist at the heart of “Concussion” that goes way beyond satire. As Abby recovers from her concussion – caused by her son bouncing a softball off her head – she vows to get away from laundry-folding, yoga class and the leaf-shrouded streets of Montclair and “go back to work.” Officially this means renovating and flipping “shithole” New York apartments with Justin (Johnathan Tchaikovsky), her hipster business partner. But Abby’s also feeling bored, horny and reckless, and after one hilariously bad encounter with a woman-for-women escort – I am told this niche does exist, although it’s a pretty small facet of the prostitution market – Justin approaches her gingerly. He knows someone better, or anyway his girlfriend does. The loft they’re working on might be put to good use, right?

Passon does a remarkable job of laying out a highly implausible and even farcical plot such that one thing seems to follow logically from the next, and seducing us – visually, erotically, humorously, metaphorically and so on – into following Abby wherever she goes. Abby has a great time with the comely young Gretchen (Kate Rogal), who in turn suggests to Justin that Abby has a gift for this, and might like to “go out on dates” with young, inexperienced women who are “looking for a more mature situation.” Her actual pimp in this thoroughly unlikely enterprise is not Justin but his tightly wound pre-law girlfriend, a ruthless operator known only as the Girl (Emily Kinney). There are no stars in this ensemble cast, but I can’t get over how good it is; special kudos also to Janel Moloney (Donna from “The West Wing”) as Abby and Kate’s overly blond, overly intrusive best friend.

Abby’s clientele in her new escort identity as Eleanor (a name, Justin observes, that makes his dick shrink) ranges from the hilarious to the tragic to the terrifying: An overweight women’s-studies major, a profoundly sad middle-aged divorcee, a woman who slaps Abby around and insults her. (And then, ultimately, that married heterosexual woman Abby’s been ogling at the gym.) Throughout “Concussion,” Passon challenges us to consider whether this is actually a “lesbian film” and what that might mean: Nobody in Montclair gives even half a crap about Kate and Abby being gay (they’re well past the point of that seeming even marginally cool, let alone controversial), and to Justin and the Girl Abby’s sexual orientation is nothing more or less than a useful commodity. Would the story be different if she were a woman who slept with men? Is she somehow more empowered as a prostitute because her customers don’t have penises?

Those are unavoidable questions that lack clear answers (I think the answer is “kind of,” or “yes and no”), but they’re not really the important questions that come up in “Concussion,” which is a lot more about the way we have chosen to live and our illusions of freedom and autonomy than about any version of sexual identity politics. Of course LGBT viewers will be especially interested in “Concussion,” but there’s no way to pigeonhole this rich and devastating tragicomic portrait of the American bourgeoisie in terminal decline. (If any right-wing Christians accidentally see this movie, they’ll be scandalized and delighted, as well as turned on.) If you’re looking for a marriage movie that’s friendly, upbeat and reassuring, I suggest you keep on looking; if you want a startling debut film that merits comparison with Ingmar Bergman, Woody Allen and Nicole Holofcener, here it is.

“Concussion” opens this week in major cities, and is also available on-demand from cable and satellite providers and on iTunes.