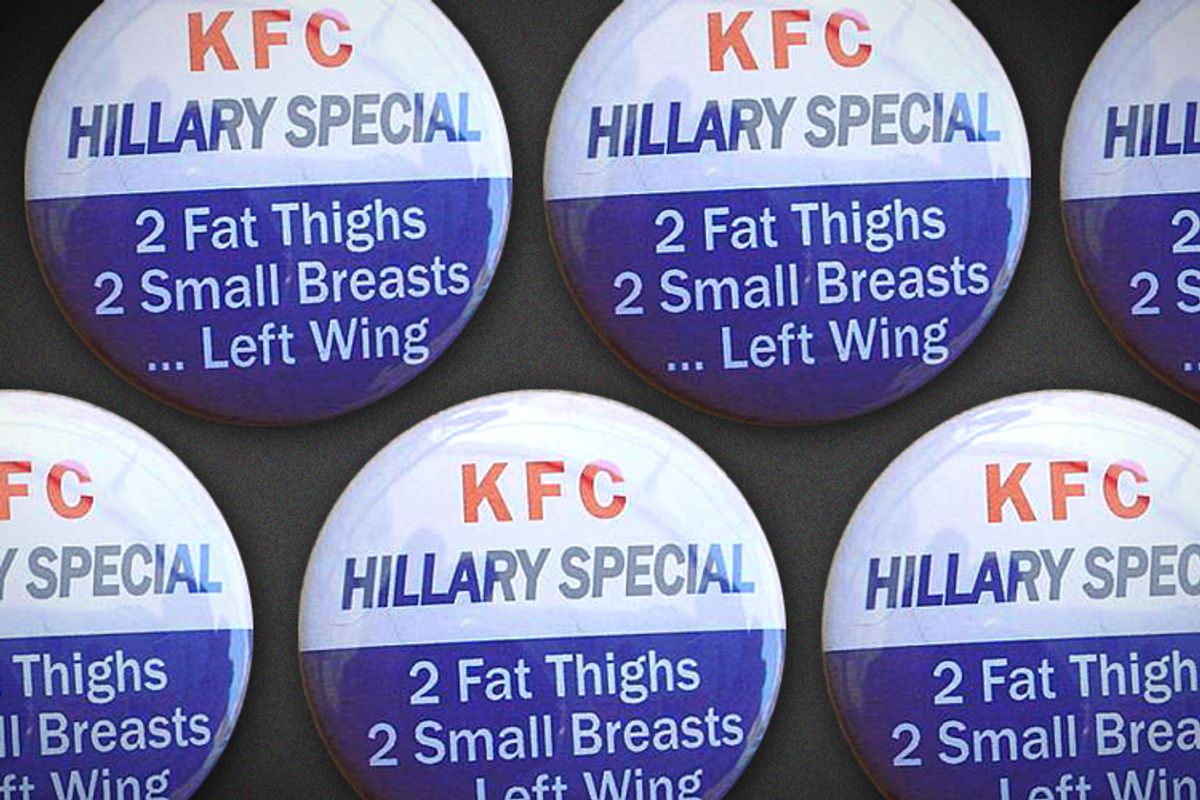 If you're going to be petty, misogynistic jackasses, could you guys at least be a little original about it?

During the California Republican Convention this weekend, San Francisco Chronicle's Carla Marinucci tweeted that "popular buttons at @CAGOP convention already take on @hillaryclinton #2016 in a big way... Ouch!!" The photo showed a row of buttons, one of which nostalgically read "I still hate Commies even after they changed their name to Liberals," and another, which more provocatively declared, "KFC Hillary Special: 2 Fat Thighs, 2 Small Breasts… Left Wing."

Aside from the fact that the sentiment is the grossest form of body snarking – reducing a woman, yet again, to her parts – it gets bonus idiocy because it's already been done. This past summer, Australia's Liberal National Party managed to tell the gag first and even more offensively, by whimsically placing on the menu of a fundraising dinner a Julia Gillard Kentucky Fried Quail: "Small Breasts, Huge Thighs & a Big Red Box." Imagine what it must be like to be the person who saw that story and thought, "Oho, that's rich! America needs this! Fire up the button press!"

The California GOP isn't represented by every sexist piece of crap some yahoos want to peddle in its name, and it's good news that reporter Marinucci later said that "Less than hour after we 1st tweeted, appears offensive #Hillary buttons gone from #cagop. Many here also appalled." But in the two days since Marinucci first revealed the buttons – two days in which the story has been picked up on HuffPo, Jezebel and Talking Points Memo -- the California GOP social media team has not issued any apology or statement of disapproval over the incident -- not in its Twitter stream, not in its Facebook page, not on its Web page. It appears no one has officially come forward to say, "This wasn't us, but it's still unacceptable." In their defense, though, they have been very busy blaming Obama for the government shutdown.

Pathetic and derivative as the buttons are, they offer a peek into a certain kind of conservative mind: the angry as all hell kind. Last week, Democracy Corps released the results of a recent focus group with Republicans, and reported, "the base thinks they are losing politically and losing control of the country – and their starting reaction is 'worried,' 'discouraged,' 'scared,' and 'concerned' about the direction of the country – and a little powerless to change course." And as Daily Kos put it, "That isn't just the sign of a minority party headed toward permanent minority status, but one that is snarling, wounded and backed into a corner." When you're enraged and afraid, you're going to retreat to the most obvious attacks you can think of – putting down a woman's looks, trolling on her body. And then being cowardly and calling it a joke.

If you'd like to order up a few of your own, the Hillary Kentucky Fried button appears to come from a site called Republican Market. If you prefer, the vendor also offers it as a bumper sticker, unless you'd rather the "Happiness is Hillary's Face on a Milk Carton." The site sells a wide variety of merchandise for the flair-oriented conservative lunatic, including buttons with such messages as "Send the illegals back and send the Liberals with 'em" and "President Barrack? Oh BUMMER!" [sic] Funnily enough, in the lower left-hand corner of that original photo of the buttons Marinucci tweeted, there's a peek at another button that reads "A Womans…" Though the rest is cut off, it appears to be  another item from Republican Market. The full text says "[sic] A Womans Place Is In The House, The Senate and the Oval Office." A woman in the Oval Office, you say? The sexism, unoriginality and punctuation disasters of the company and its customers aside, it seems they're pushing at least one message plenty of Democrats agree with.