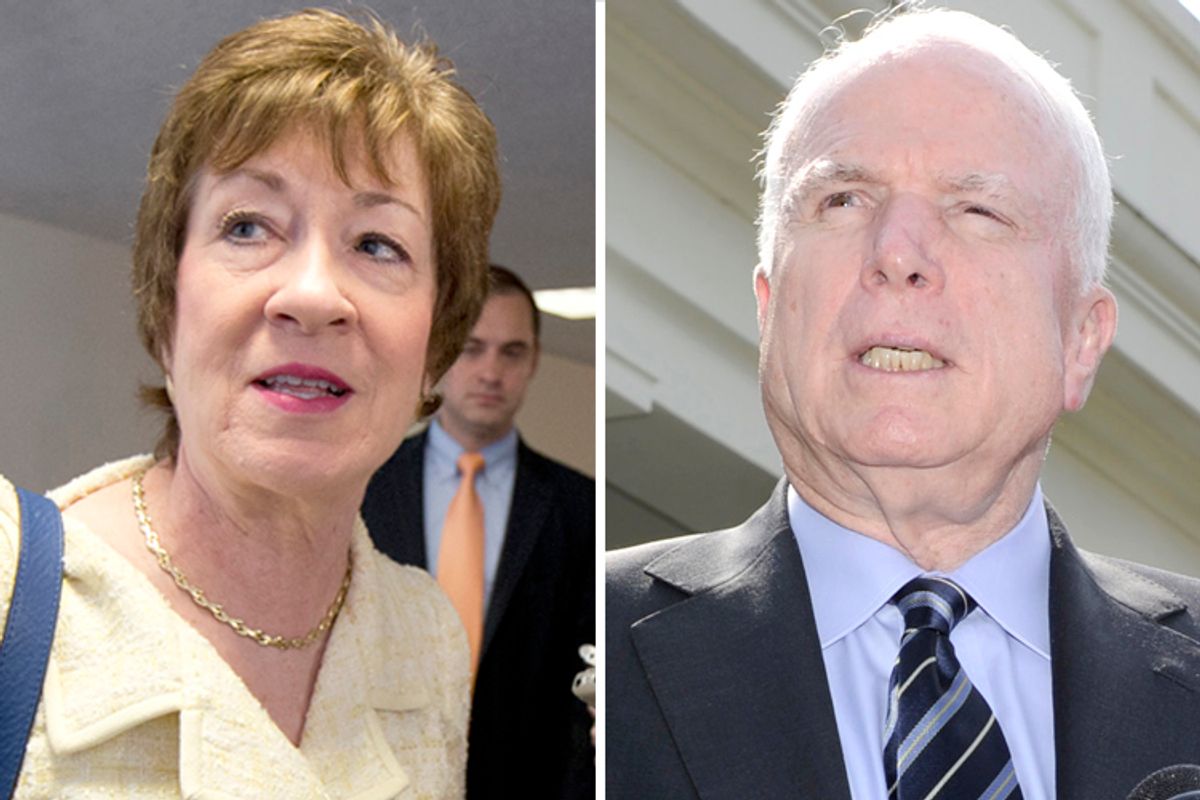 Read Brian Beutler if you want to feel calmer about finding an end to the debt ceiling standoff that doesn’t involve either blowing up the global economy or another Democratic cave-in on spending and so-called entitlements. I felt a whole lot calmer, but I’m still not calm.

Senate Majority Leader Harry Reid’s plan to lift the debt ceiling is a good one. Actually, it’s Senate Minority Leader Mitch McConnell’s old plan – give the president the power to lift the debt ceiling himself, subject to a supermajority override in both houses of Congress. But as we’ve seen with the GOP’s abandonment of the individual mandate for health reform, the cap and trade solution to carbon pollution and the earned income tax credit alternative to welfare, once Democrats endorse a GOP solution to reach a compromise, Republicans have a history of walking away from it. McConnell disowned his own idea a long time ago, but Reid thinks he can get some backing – or at least a promise not to block debate and a vote on the bill -- from the Senate’s GOP moderates.

I hope he’s right. But so far, of the “moderate” Republicans Reid won over to get a vote on the clean continuing resolution, only Sen. Mark Kirk of Illinois has said he’d support Reid’s plan. Sen. John McCain has sounded like he’s open to the Reid move but he’s made no commitment. “I want to see what the dynamic is,” he told Jeff Zeleny. Even worse, here’s Maine “moderate” Susan Collins in Politico refusing to say whether she's open to Reid's plan:

I’m not going to prejudge what’s going to happen. The debt ceiling traditionally has been used as a way to deal with important fiscal issues. And I don’t have a problem with that.

Many, many people, including Beutler, have explained why Collins’ claim that the debt ceiling has been used to deal with “important fiscal issues” is garbage. Neither party has ever threatened default before. Yes, Senate Democrats voted unanimously against the 2006 debt-ceiling hike, but they didn’t filibuster it, or threaten to. There was no chance that they would win. And no party has floated its losing presidential candidate’s entire agenda as its offer in exchange for its votes on a debt-ceiling hike, as the House GOP is doing. Collins is spouting House Speaker John Boehner’s talking points, and right now she can’t be distinguished from his Tea Party caucus.

Can I just also say that while I’m glad some GOP senators refused to filibuster a vote on the clean CR, isn’t it a little bit appalling that all of them then went ahead and voted against it? Yes, McCain wins points for his tough talk about accepting the will of the voters in 2012 and acknowledging that Obamacare is the law of the land – but even he has repeatedly voted against Reid’s measures to strip the House GOP’s insane Obamacare demands. So has every GOP senator.

So we’re merely applauding McCain and other so-called moderates for refusing to support Ted Cruz’s filibuster push. They still voted with Cruz on the CR. Talk about the soft bigotry of low expectations.

Still, Harry Reid is to be applauded for pushing a solution to the debt-ceiling crisis that will force the “moderates” to live up to their word, that they don’t want to crash the global economy. Let’s hope the White House backs him completely. The reason that McCain and Collins may want to watch the “dynamic” or not “prejudge what’s going to happen” may be the bewildering fuzziness of some people in the Obama administration on whether the president will accept a short-term debt-ceiling hike, after which he’s willing to negotiate a longer-term budget deal that trims “entitlement” spending and gives the GOP what it wants.

I know, I know, “senior administration officials” ran out Monday to anonymously insist that White House economic adviser Gene Sperling wasn’t signaling any kind of shift when he told the Politico Playbook’s breakfast that a two-to-three-week extension wasn’t out of the question. “Longer is better for economic certainty and jobs, but it is ultimately up to [Congress],” Sperling told Mike Allen. Jay Carney later said there had been a “misunderstanding” about Sperling’s comments – but then he reiterated that the length of the extension wasn’t up to the White House, but “it’s up to [Congress] to set the duration of that.” While that’s technically true, the president’s words carry weight. You could argue that Carney and Sperling’s answers were comparable to Boehner saying “it’s not my job to tell the American people what to think” about birtherism.

Let’s hope the White House doesn’t undercut Reid the way it seemed to on the fiscal cliff deal at the end of 2012.  You’ll recall: Reid thought he could hold firm on revoking the Bush tax cuts for those who made more than $250,000, and either postponing or lifting the sequester cuts that settled the 2011 debt-ceiling crisis; Biden came in and reached a deal with McConnell that raised the higher tax rate threshold to $450,000 and only extended the ugly sequester cuts two months – and of course, they then kicked in. While there’s no certainty Reid could have gotten his deal, it’s clear he felt undercut by Biden, who’s been conspicuously missing in the current government shutdown/debt ceiling debate.

Yes, progressives continue to worry about the possibility of the president cutting a deal with GOP extremists, while hoping we’re wrong. We’ve hoped we were wrong before, but we’ve been right. (Here are my takes on the 2011 debt ceiling “deal” and the fiscal cliff deal.) The myth that we have GOP “moderates” is strong in the media, but one thing that prevents the emergence of meaningful GOP moderation is the perception that the White House will, in the end, cave to the extremists’ demands. That can’t happen again. Here’s hoping Brian Beutler is right, and Reid’s got this.