With many sent home from their jobs in Congress and federal agencies, here's how the spots are being filled instead 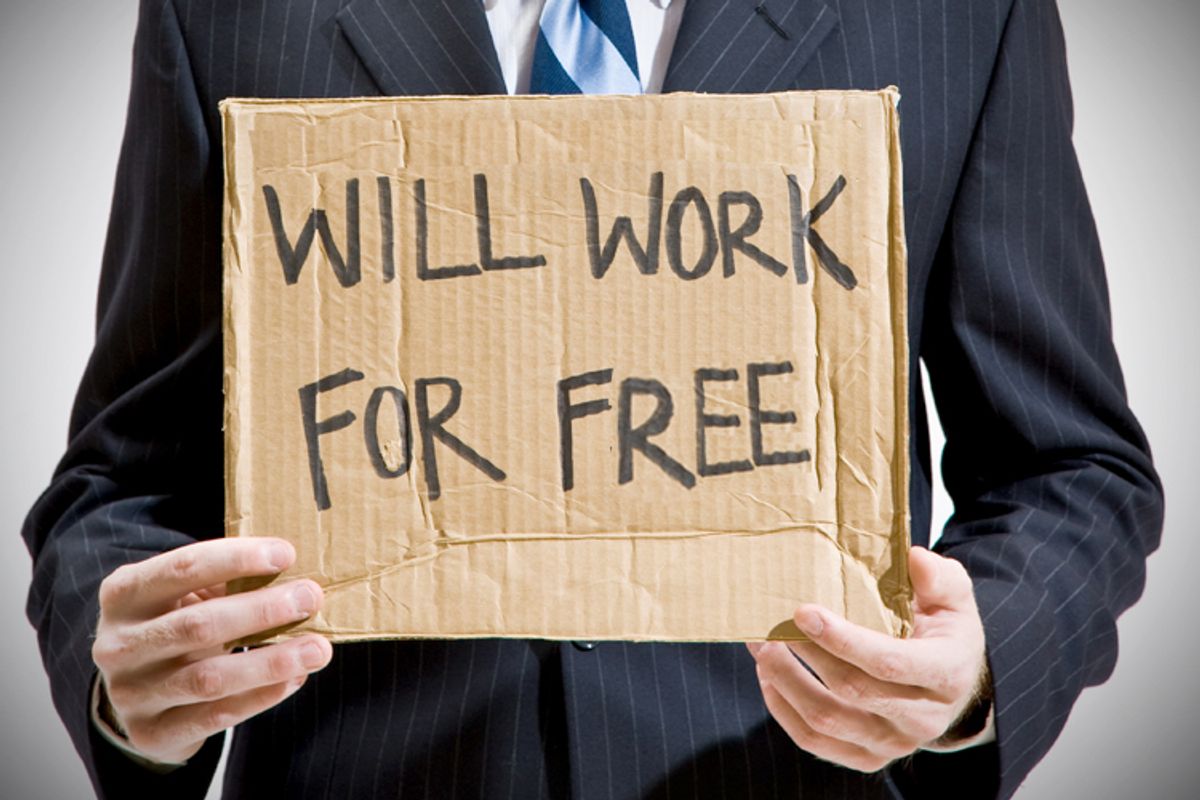 All over the shuttered federal government, large swaths of agencies are understaffed and some members of Congress are operating with a tiny fraction of their aides. But as “nonessential” workers have been sent home -- not even legally allowed to volunteer time for their government – some government offices have been quietly using replacements: unpaid interns.

In accordance with a strange 19th-century law, the full-time workers who are not deemed necessary to the “safety of human life or the protection of property” were sent home during the shutdown, with certain exceptions. But since interns have been legally volunteering their services all along, it turns out they are allowed to keep working, according to Raymond Natter, a former deputy chief counsel of the Office of the Comptroller.

That’s because there are separate statutes that allow the government to use certain volunteers, such as students receiving training, and National Park Service volunteers, Natter said. And that’s just what’s been happening, according to Capitol Hill and executive branch aides and interns.

The unpaid helpers are evidently not working at the White House during the shutdown, President Obama’s press secretary, Jay Carney, has said. (So there will be no 2013 version of Monica Lewinsky, whose increased responsibilities eventually led to trouble for the White House.)

But within the Executive Office of the president, which is down to about one-fourth of its full-time staff, some interns are picking up the slack. That group of offices, normally staffed with about 1,700 people, includes the Office of Management and Budget, the Office of Administration, the United States Trade Representative and others.

Press offices at many of these agencies, including the White House, did not respond to inquiries about their policies toward interns. Recordings left on the White House, OMB, and USTR press lines said the teams were operating with greatly reduced staff. Most Capitol Hill spokespeople did not respond to emails. But many staffers and interns agreed to be interviewed anonymously.

One intern within the Executive Office of the President, though not the White House itself, said he and his low-level colleagues are doing a lot of work that the “nonessentials” would be doing. That intern said he and his colleagues were “in great need” if they work in an office containing essential employees.

In the House of Representatives, many interns are essentially replacing legislative correspondents and staff assistants. According to one veteran aide, he knows of four offices where interns are answering phones and going through mail, no longer working on their intern projects. In offices he has worked in, he said interns are normally restricted as to what kinds of mail they can answer and letters they can write.

“I’m glad we didn’t have interns in our office,” the aide, who preferred to remain anonymous, said. His boss, like many other House lawmakers, did not furlough any workers.

In the Senate, many offices are operating with skeletal teams. Claire McCaskill, D-Mo., has five staffers left out of 50. Marco Rubio, R-Fla., is working with seven out of 57, according to Politico.

Sen. Bob Casey, D-Pa., has furloughed everyone save a handful of staff in D.C. and two in-state aides. But interns continue to work, according to his spokesperson April Mellody, though their responsibilities have not changed.

Meanwhile, many interns have been told to stay home. The Lewinsky affair was one of the reasons that at least one Department of Treasury intern was turned away from the office, his boss told him. “Since my charm is irresistible they fear the same might happen to Jack Lew,” he quipped, referring to the Treasury secretary.

The shutdown has made things more difficult for other interns.

With doors closed at the Smithsonian, a National Museum of American History intern said it will be harder for her to complete her research, which is for academic credit, ABC News reported. And interns at a NASA facility in Mountain View, Calif., who had relied on NASA housing are now displaced, according to the San Jose Mercury News. And the Environmental Protection Agency and Department of Commerce are not using interns while their funding is on ice, according to spokespeople. If the Department of Energy shuts down -- it is currently operating normally because it relies on “multi-year or no-year” appropriations -- interns won’t be working, a spokesman said.

Still, that interns were working in certain offices surprised Barry Anderson, a former top official at the Office of Management and Budget, who worked during the 1995 and 1996 shutdowns. “I can’t imagine we would have entertained the thought that interns could work,” he said. “How could you have an unpaid intern that is essential?”