Miriam Carey, Obamacare and WIC: A deadly war on women of color 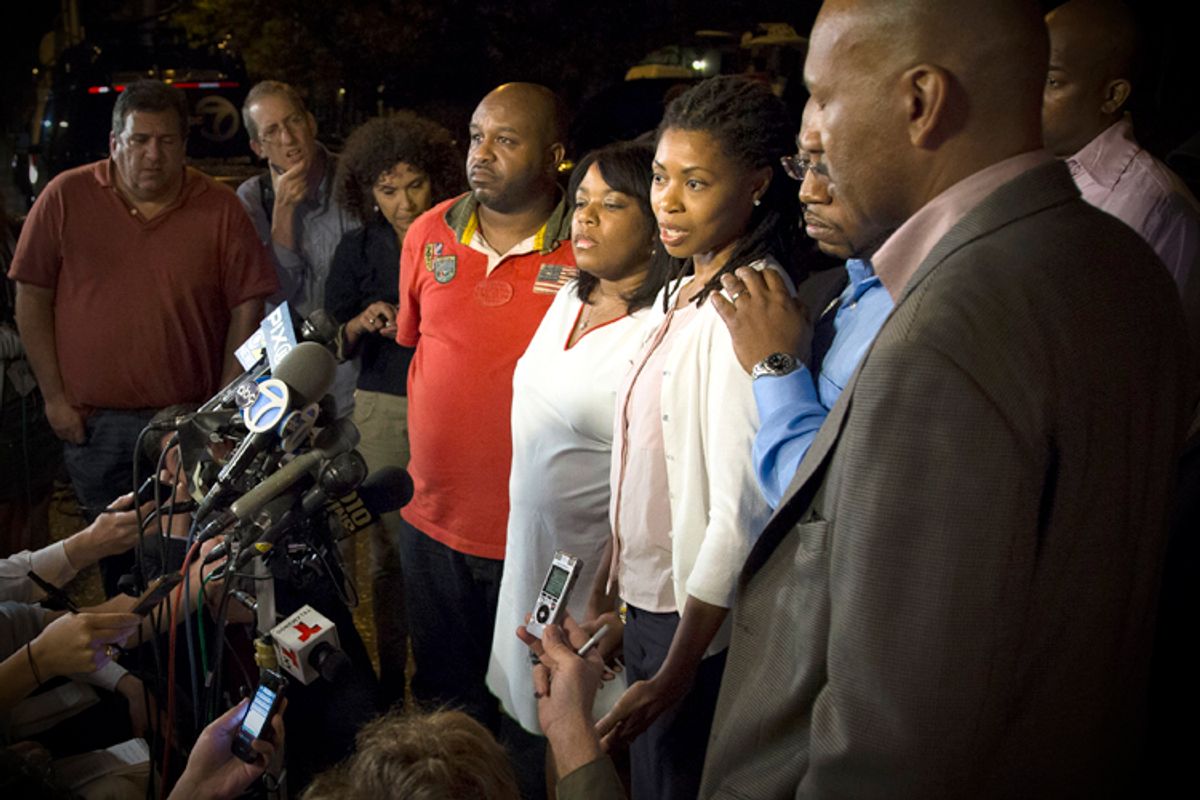 Amy Carey, fifth from right, sister of Miriam Carey, speaks outside the home of her sister Valarie in the Brooklyn, Oct. 4, 2013. (AP/John Minchillo)
--

Though many see Miriam Carey’s death as the tragic, but reasonable consequence of her choice to ram the White House gates with her car, she is actually just one more casualty in an ongoing, particularly vicious war on women.

The mother of a 1-year-old daughter who was in the car while police officers fired multiple rounds into the vehicle to subdue her, Carey had no history of violence but had been diagnosed with a case of postpartum depression. Some reports indicate that she had been trying to slowly wean herself off the medicine.

The temptation in this case is to read Carey’s acts and her death as an anomaly. But her death cannot be understood outside of the broader set of policies governing the treatment of women and people of color in this country.

The GOP has shut down the Congress for a week now based on the simple belief that everyone is not entitled to healthcare. Among other things, Carey’s death is a cautionary tale about what can happen in a nation that systematically ignores the unwell. One is left to wonder whether she had all the social support she needed in a country that not only thinks access to healthcare is a privilege rather than a right, but that also stigmatizes mental illness.

The shutdown itself has been engineered by a party that is hell-bent on forcing women to have babies that they may not want to have, while making access to care for those children extremely difficult to obtain. For instance, one of the programs most immediately affected by the shutdown is the Women, Infants, and Children (WIC) program, which provides vouchers for food and infant formula. The program can be sustained at the state level through the month of October, but will jeopardize the lives of 8.9 million people if the federal government doesn’t get its act together. The program disproportionately serves working-class women of color.

Thus Carey’s death is also set against the backdrop of a governmental assault on struggling and vulnerable moms. She is also a casualty of the prevailing racialized logics of governmentality in this moment: irrational obsession with terrorist threat, over-policing of marginalized communities and a lack of empathy for the least of these, all of which are tied to a fear of brown people. How many folks must die because officers’ first response is always to shoot to kill, never to disable? How many immoral acts – for instance, the callous disregard for the life of the 1-year-old sitting in the backseat enduring a barrage of bullets – must we blatantly excuse before we reckon with our growing lack of empathy as a nation for people in distress? When will we come up with new understandings of these kinds of violent acts that don’t pivot upon the logic of terror?

To put it bluntly, whenever black people start committing spectacular forms of violence -- when most psychological profiles understand these perpetrators to be traditionally white males -- we should stand up and take notice. Black disaffection with the system is not new, but black women are some of the most loyal citizens in the American body politic. Lest we forget, 90 years ago in 1923, the Democratic Party and the United Daughters of the Confederacy got congressional approval to raze a Mammy Monument in tribute to black mothers. Luckily, it was never built.

But a woman like Miriam Carey fits far more closely with our venerable and historic notions of strong black womanhood and unassailable black motherhood, than with the contrasting bad black mother stereotypes. And in 2008 and 2012, black women voted more than any other demographic in the country. In the wake of Aaron Alexis and the Navy Yard shooting and Miriam Carey’s attempt to breach the White House gates, we should ask ourselves what it means when black citizens get violent in Washington under the long shadow of a black man in the White House. Something is afoot.

Carey’s distress is not anomalous, but representative; not merely particular, but also universal. Even her delusions, that she had a special mode of access to President Obama, tell us something about the desperation that average citizens feel -- who want to have the ear of someone, anyone, who has the power to right this ship. Even those of us who are well have a surging kind of discontent with these unrelenting and internecine struggles that benefit only the rich and powerful.

Turning our attention to all the social conditions that exacerbated Miriam Carey’s poor mental health; recognizing the fears that we share in common with her; the powerlessness that we are all feeling in the face of this governmental debacle; admitting that we wish we had the courage to shake the gates of power, too, might lead us to a most inconvenient truth: But for a system of care attuned to the needs of struggling people -- particularly moms and children -- Miriam Carey’s daughter would not be a motherless child.