Steubenville school official could get more jail time than rapists

What's the right punishment if adults knew about the rape? 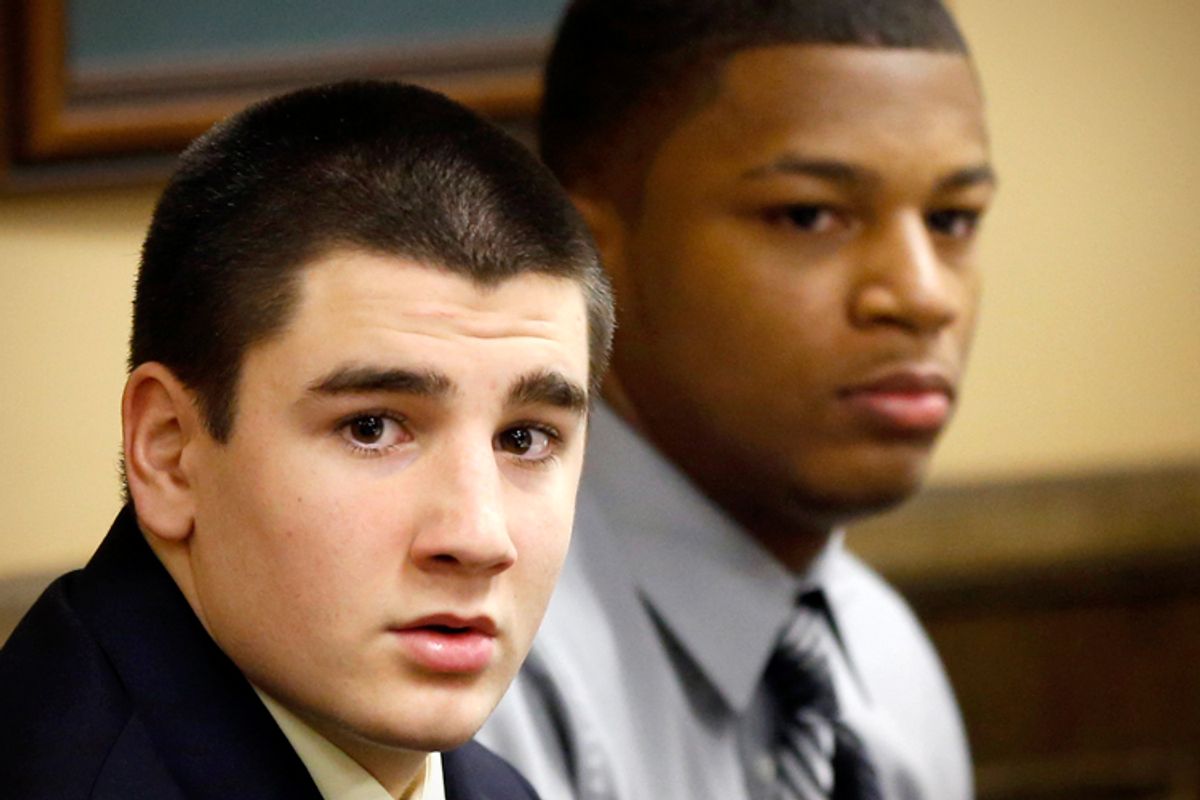 William Rhinaman, the 53-year-old director of technology at Steubenville High School, has never been accused of being anywhere near the 16-year-old local girl who was raped on the night of Aug. 12, 2012. Yet he now faces the possibility of serving more time in prison than the two young men convicted of sexually assaulting her. On Monday, an Ohio grand jury indicted Rhinaman on charges of tampering with evidence, obstructing justice, obstructing official business and perjury in a case that shocked the small community – and the nation.

It's known that the convicted high school players, Trent Mays and Ma'lik Richmond, documented and shared their abuse of the girl among their peers, who gleefully joked about it across Twitter and YouTube. And even when talk among the students began to turn toward the possibility of consequences, the boys seemed unconcerned, noting the adults in their community had their backs. In texts, Mays said of coach Reno Saccoccia, "I got Reno. He took care of it and shit ain’t gonna happen, even if they did take it to court ... Like, he was joking about it, so I’m not worried." Earlier this year it looked more than likely Saccoccia would find himself under criminal investigation; the only repercussion for him so far has been a two-year renewal of his contract as director of administrative services from the Board of Education.

The ugly elements of complicity and apparent coverup have long lingered over the case, though it seemed for a while they were going to be quietly forgotten. Just last week, the Associated Press noted that the grand jury was heading toward the six-month mark without any decisive action toward any other individual allegedly involved in the case.

But the arrest of Rhinaman, who today finds himself jailed without bail, suggests that further accountability may soon be demanded not just of him but many other members of the Steubenville community. The details of the charges against Rhinaman have not yet been revealed; Ohio Attorney General Mike DeWine told reporters Monday "the arrest is only the first part of an ongoing grand jury investigation." The AP says that investigators have searched the Steubenville High School and the local school board offices, as well as Vestige Digital Investigations, a digital forensics storage company.

Richmond is currently serving one year in a juvenile correctional facility for the rape, and Mays is serving two. If convicted, Rhinaman could serve four. Failure to report a felony is a criminal offense -- and the charges against him are more elaborate than those against Mays and Richmond. His attorney Stephen Lamatrice says, "Our position is he did nothing wrong." But the victim's attorney Robert Fitzsimmons told a local news affiliate Tuesday, "Now you see the responsibility as to what parents, teachers, principals, IT people in positions that are supposed to be protecting children, you see the shift to them -- what responsibility do they have?"

Among the many horrifying aspects of the Steubenville case has been the strong sense not just that some boys abused a girl who was incapable of consent, but that the adults around them may have actively tried to assist them in getting away with it. If true, is that a worse crime than the rape; does it merit a stronger punishment? No, but it does suggest a difference between the vicious, unthinking inhumanity of a minor and the chilling possibility of an adult's attempted injustice -- one that was well considered. It implies that members of a school community cared more about their athletes than about some girl who got drunk at a party. Even some girl who was violated and humiliated and laughed at. Though there's much still to be revealed, it's certain that Trent Mays and Ma'lik Richmond were not alone in the degradation of that girl, and they shouldn't be alone in answering for it. Last March, Mike DeWine told CNN, "One of the lessons of life is we have to take care of each other, and we have to try to help people and we have to do what's right. And there were precious few people that night that were doing what was right."