The right's antics could cause a Depression: The terrifying default aftermath

Normally with a financial crisis, there’s at least agreement on the need for a response. Not with these lunatics 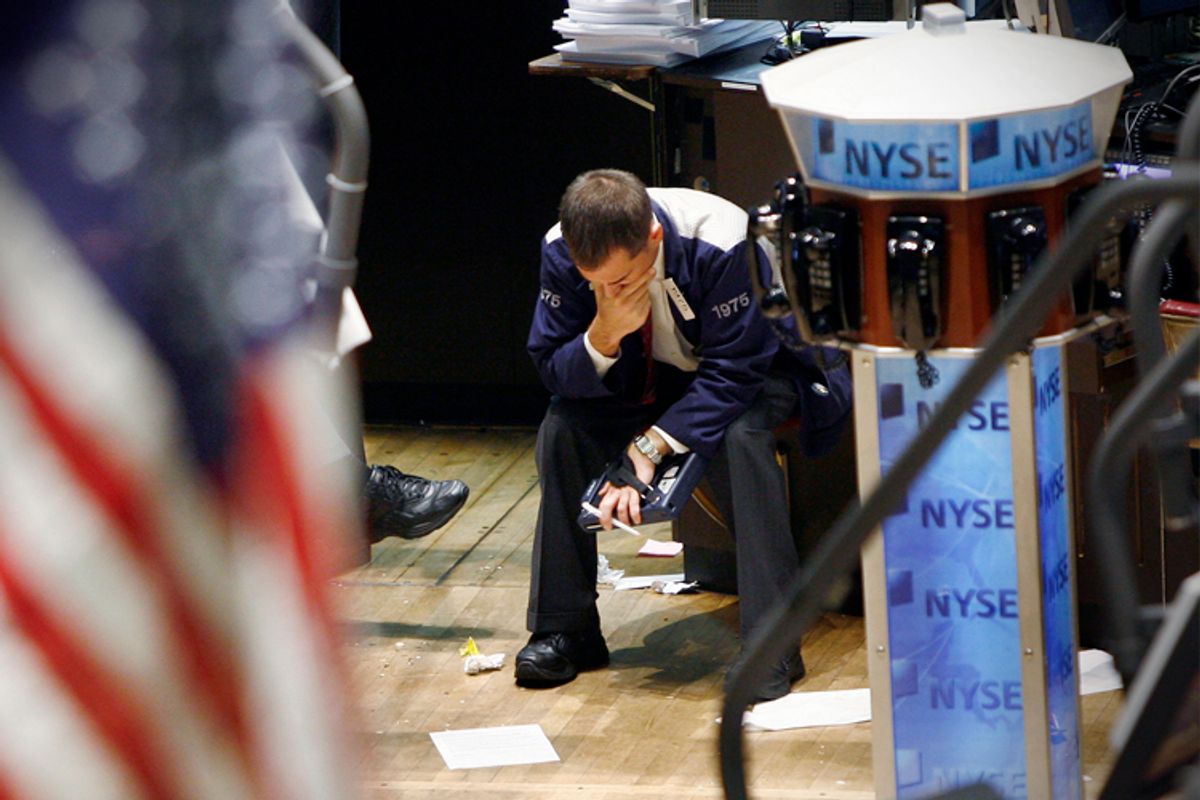 The biggest threat from the twin calamities of the government shutdown and the debt limit breach is not actually the real-world effect; it’s what happens the next day, and the day after that. In other words, the most frightening thing about default, which is much more problematic than the shutdown, is what happens afterward.

The day after the financial crisis, there was general agreement on the need for emergency measures -- and we got TARP and the stimulus. (There may be reason to be disappointed in both, but emergency measures were taken.) The day after a default in 2013 -- or at least the day when the consequences become clear -- this Congress is likely to do nothing. No stimulus, no bank recapitalization – nothing -- in Hoover Congress-like fashion. And that's the real fear: not just the dire consequences of a debt default, but the expected lack of response. That way lies depression.

The truth is we don’t have a Congress willing to take the necessary steps to intervene and mitigate a crisis, self-created or not. The usual tools available to stave off a recession – like government stimulus – have been mocked and savaged, not just by House Republicans, but by a deficit-obsessed establishment. And the rising opposition to bailouts likely takes them off the table, at least in an overt way. Washington’s reaction to these disasters is precisely what makes avoiding them so critical.

Let’s survey the damage. Now that furloughed federal workers are likely to receive back pay for the time they’re missing on the job, the economic impact of the government shutdown has lessened to a degree. But the real problems with a protracted shutdown would hit the private sector.

That includes federal contractors who do billions of dollars’ worth of business each day with the government, and who will soon begin temporary layoffs to deal with falling demand. Stoppages in lending from sources like the Small Business Administration and the Federal Housing Administration also slow economic activity, much of which would go into new hiring or sustaining employment. And mortgage lending could be delayed by the inability to access an IRS form to validate borrower income at closing (lenders are dealing with this in different ways, but in a long-term shutdown, they will likely delay closings).

The lack of federal economic data makes it hard to know how badly things are going on a week-by-week basis. But we know from private studies that consumer sentiment is collapsing, which usually spells doom for personal spending.

And all of these outcomes pale in comparison to what would happen if the government defaulted on any of its debts. Put the misguided statements of debt limit denialist Republicans aside. Based on current cash on hand at the Treasury Department, roughly 32 percent of the funds owed between Oct. 18 and Nov. 15 would have to go unpaid. That’s a massive reduction in federal spending, and would cause a significant hit to Gross Domestic Product. Prioritization of payments, which may be unconstitutional, would certainly be a logistical nightmare, forcing Treasury to rewire its payment system and pick and choose between up to 100 million monthly invoices.

If one of the missed payments is to a holder of U.S. debt, then you have a default event that could cause credit markets to freeze, the U.S. dollar to plummet, and financial institutions to struggle to secure short-term lending on which they rely. With the dollar and the U.S. Treasury bond serving as a benchmark for world markets, Businessweek says that the resulting global apocalypse would dwarf the implosion of Lehman Brothers that precipitated the 2008 financial crisis. And it would injure the perceived stability of U.S. debt maybe forever, raising our borrowing rates as investors decide a country that threatens to default for no good reason isn’t worth putting their money into.

These are obviously terrifying scenarios. But we’ve experienced economic ruin in the U.S. before. Out of the lackadaisical initial response to the Great Depression, the Roosevelt administration and Congress created a number of tools that mitigate the effects of a slowdown. They put in place automatic stabilizers, expanded over the years, delivering cash benefits to the most vulnerable. Most important, they fed a consensus that fiscal policy must be increased dramatically to fill a gap in demand.

When the economy is depressed, government must act as the spender of last resort. FDR saw this personally, when after a misguided effort to reduce spending in 1937, the economy slipped into recession once more. For decades after the Depression, presidents of both parties used fiscal policy to smooth over economic crises and get the country back on track. Even George W. Bush sent out $300 checks to Americans during both the 2002 and 2008 recessions.

But that consensus is gone. We have a Congress that, for the past several years, has worked tirelessly, in the midst of a post-recession recovery, to cut spending. This created an unprecedented fiscal drag that has stunted economic growth.

While every other recession of the past 30 years has led to increased government outlays, in this one, spending has shrunk. What’s more, the Washington establishment has generally applauded this economy-killing austerity, and even sought additional measures as part of a “grand bargain” to deal with long-term deficits. They have framed the economy in terms of a morality play, and lectured America on “paying its debts” after a crisis, instead of just fixing the crisis. And they have found a sympathetic ear from the majority of the public, tragically.

Starting in 2011, Congress and the president have cut the budget by $3.9 trillion over a 10-year period, and policymakers have done virtually nothing in the face of sequestration, which the Congressional Budget Office says has reduced GDP by 0.8 percent and will cut nearly 1 million jobs next year.

Do we seriously think that these legislators will react to a serious economic calamity in the normal fashion, by enacting an economic stimulus program?

No other Congress has had a philosophical opposition to Keynesian economics to contend with, along with a Tea Party base demanding more spending cuts. There may not be a working majority in the House that believes in economic stimulus, let alone one willing to vote for it. Policymaking in the post-recession period has been the proximate cause for the lousy recovery. This gang that couldn’t shoot straight has no interest in a massive Keynesian boost to kick-start the economy. It just won’t happen.

Similarly, there is no chance that Congress would approve a bailout of any industry, least of all the banking industry, in reaction to a financial meltdown. The banking sector, for once, would have a colorable claim to federal aid, since the federal government would be wholly responsible for the default event that could seize up credit and bring financial institutions to the brink of bankruptcy. But opposition to bank bailouts runs deep on both sides of the aisle, and for good reason in many cases. The Federal Reserve could commit to emergency lending to try to save the banking sector, but they nearly maxed out their balance sheet in the aftermath of Lehman Brothers, and this event would be several orders of magnitude larger.

So after a crisis likely to trigger a deep global recession if not a depression, there’s simply no reason to believe that the same people who caused the predicament would take the proper steps to fix it. And that means that the economic impact could last years and years more than necessary. Recall that the Great Depression began with a stock market crash in 1929. In the four years between that event and FDR’s election in 1933, Congress’ dithering ensured that the economy would sink into a hole from which crawling out would take over a decade. With the current Congress in place, we’d be lucky to get away with just a lost decade in the aftermath.

Armed with the knowledge that Congress won’t meaningfully help recover the economy, the White House needs to think very hard about forsaking the various options they could use to try and avert a debt default. It’s not just that the alternative is a disaster; it’s a prolonged disaster.