Conservative secessionists want their own country? Their agenda already rules, even though a majority opposes it 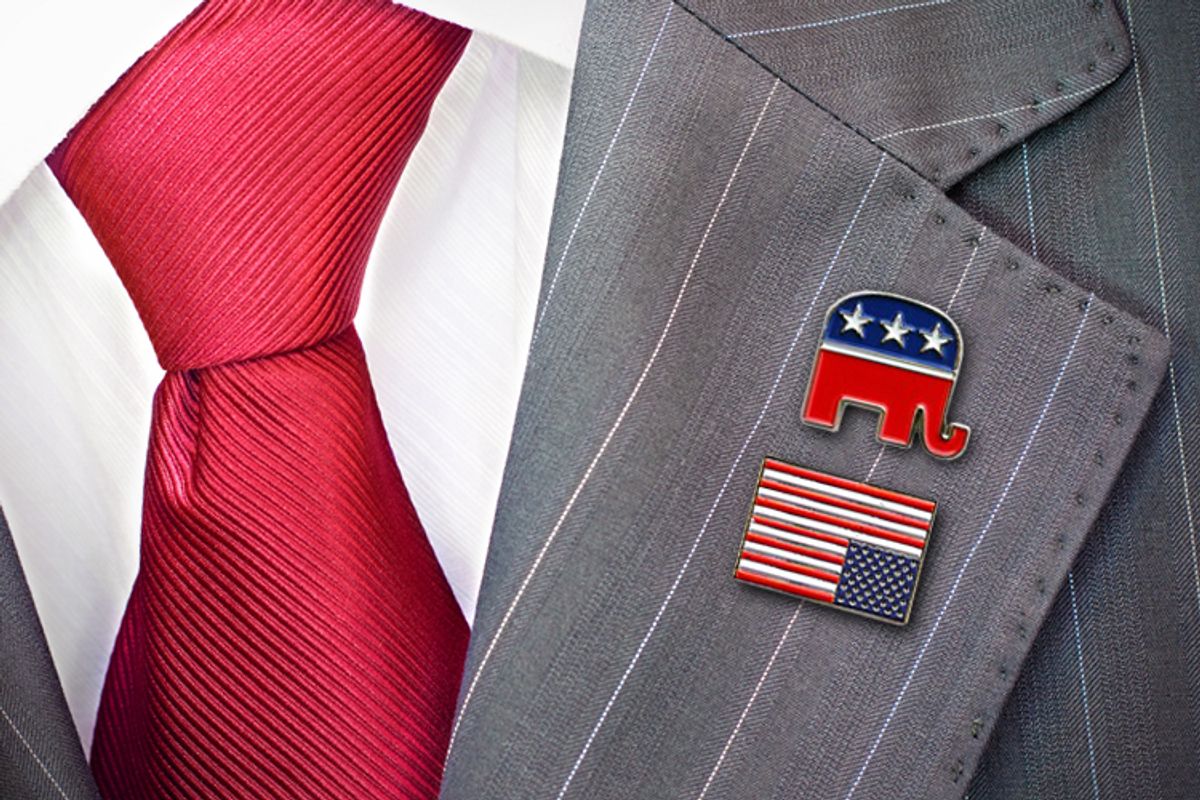 Thanks to a confluence of three events, the S-word -- secession -- is once again in the air. In Washington, new questions are emerging about whether the United States can function as a unified nation after a partial government shutdown was engineered by a largely regional party -- one whose home territory looks eerily similar to the Confederacy. Adding to the questions about the viability of the post-Civil War union is the fact that the shutdown has been orchestrated by a Texas legislator whose state party stalwarts -- including its governor -- seem to support secession, to the point of taking concrete legislative steps to prepare for independence. On top of all that, in states across the country, incipient secession movements have sprung up only a few months after secession petitions flooded the White House website.

In his seminal book "Better Off Without 'Em," Chuck Thompson marshals data to argue that America would benefit by letting the Republican Party and its strongholds formally secede from the country. Whether or not you end up agreeing with Thompson, the argument he forwards is compelling on the policy merits. It also raises an important but less-explored political question: Why would today's conservatives want to formally secede from a nation that gives them the privilege of governing the whole country, even though they remain in the electoral minority and even though their policy agenda is opposed by a majority of the country?

Partisans on both sides will inevitably deny this reality, because they see the world exclusively through a red-versus-blue prism. The reality-distorting effects of such a prism cast Democratic politicians as uniformly liberal, and therefore creates the illusion that Democratic Party control of the presidency and the U.S. Senate mean those institutions are similarly liberal. But such a partisan view obscures ideological conservatism's undeniable dominance of both parties -- and, thus, American politics.

Inside the Beltway, you can see this dominance in (among other things) the transpartisan support for the escalation of wars, the expansion of the surveillance state, the perpetuation of the Drug War and the preservation of corporate welfare. You can also see it in the annual budget fights that interminably shift to the right.

The last few months illustrate that point. Today, draconian sequestration-gutted budgets that were recently considered controversial are the new mainstream center. Indeed, to Democrats, the sequestration levels they once criticized as too harsh are now the new acceptable normal. At the same time, to Republicans, the sequestration levels they once could only dream of are now the overly "Big Government" that allegedly requires a full-on government shutdown to rein in.

Underscoring the rightward shift, that government shutdown is not coincidentally structured to keep funding conservatives priorities (the Military-Industrial Complex, the Surveillance State, etc.) while eviscerating liberal social programs. Meanwhile, the Heritage Foundation's healthcare ideas championed by the Republican Party's most recent presidential nominee are now billed as a socialist plot, thus pushing the Overton Window even further to the right and marginalizing anything genuinely liberal like, say, single payer. Oh, and as all this is happening, popular liberal priorities like gun control can't get an up-or-down majority vote even after children are massacred.

It's the same story of conservative domination in many state legislatures, regardless of party control. On economics, the debates in both Republican and Democratic states are typically not about reducing corporate welfare and tax cuts and using the recovered cash to better fund the social safety net. Instead, whether in a red or blue legislature, it usually is a debate about how much more corporate welfare and tax cuts to hand out, and how much more the social safety net must be gutted. At the same time, the serious state-level gun control proposals are stymied despite their strong public support, and legislatures keep passing new restrictions on a woman's right to choose, despite strong public opposition.

What's news here is not that the right has a hammerlock on American politics, but that it has engineered such a hammerlock even as public opinion polls show America is moving to the left on issue after issue after issue, and even as national electoral results show America continuing to overwhelmingly vote against the Republican Party's ultraconservative agenda. This dichotomy between political power and public will represents far more than mere tolerance of a political minority's rights in a republican democracy. It is more than even a tyranny of the conservative minority. It is nothing short of the conservative movement declaring independence from America yet still ruling the America it abandoned with the entitled arrogance of an occupying force.

None of this is an accident. It is the result of a preconceived strategy that relies on two sets of tools.

The first is the unprecedented use of the U.S. Senate filibuster and the creation of the so-called Hastert Rule. The former gives just 11 percent of the population enough Senate representation to stop anything (like, say, minimal gun control) that the other 89 percent may want. The latter basically does the same thing, only with U.S. House rules that prevent any bill from even being voted on unless it has the support of a majority of the House Republican Conference. This particularly empowers a tiny minority of conservative voters considering that the GOP Conference didn't even win a majority of votes for U.S. House in the last election.

How, you ask, did Republicans win the lower chamber but receive far fewer total votes for the U.S. House than Democrats? They employed the second set of tools: redistricting and the gerrymander.

As Mother Jones magazine documents, Republican legislatures in 2010 used the decennial practice of redrawing district lines to all but guarantee the GOP control of the House, irrespective of whether a majority of American voters actually cast their ballots for that. The result is exactly what President Obama described at his press conference yesterday when he said: "There’s no competition and those folks are much more worried about a Tea Party challenger than they are about a general election where they’ve got to complete against a Democrat or go after independent votes -- and in that environment, it’s a lot harder for them to compromise."

Why is it harder to compromise? Because a Republican in a gerrymandered district doesn't have to worry about a general election in which he gets painted as an extremist. In such a district where the primary winner is the automatic general election winner, that incumbent is mostly concerned with creating a voting record that appeases ultraconservative Republican primary voters and therefore prevents a primary challenger from calling him a moderate.

While it is true that none of this comprises a formal secession, it is also true that all of this together does indeed represent a genuine unofficial political secession by the right. Through the filibuster, conservatives now use the brinkmanship of threatened government shutdowns and debt defaults to successfully legislate their pro-militarism, anti-social-program agenda over the objections of everyone else. At the same time, through gerrymandering, conservatives have geographically walled themselves off in a way that prevents them from having to electorally answer to anyone but themselves.

They have, in other words, made a deliberate choice to secede into their own separate nation. Call it Conservastan.

This was a choice, of course, that the right didn't have to make. To start winning national elections and electoral mandates again, the conservative movement could have used redistricting to dilute Republican districts, make more Democratic districts potentially competitive, and then defeat Democrats in those competitive elections. That would have required the difficult work of broadening the movement's agenda and expanding its electoral base, but if successful, it would have also led to actual mandate-worthy majorities and genuinely national governance for the long haul.

Instead, the right chose to use redistricting to create a whole separate political country for themselves. Inside this new country, the Fourth Estate check on power isn't an objective news media -- it is Fox News, Rush Limbaugh and right-wing media enforcing dogma against the perceived threat of ideological traitors. Inside this country, the Republican Party isn't interested in broadening its agenda; the incentive in Conservastan is for the party to continually narrow its agenda to intensify conservative fervor so that the gerrymandered districts that comprise Conservastan remain impenetrable GOP strongholds.

As a pure power grab, the strategy has been wildly successful. Not only does the conservative movement's less populous breakaway country now control the political destiny of those of us still here in regular old America, it does so while making sure all of us in liberal America financially subsidize Conservastan.

Thus, we return to that first question: Why would any conservative want to formally secede from the union when the conservative movement's undeclared political secession has been so incredibly successful for the right? If, say, you are a conservative living up the road from me in Northern Colorado, why would you want to formally secede when the conservative movement's aggressive abuse of the state constitution and recall process allows your fellow Colorado conservatives to shape large portions of state policy without actually having to win statewide elections anymore? Why, too, would you want to give up such privilege and also give up subsidies that, according to the I-News Network, makes the rest of Colorado give you a net cash transfer of "between about $60 million and $120 million or more a year"?

These are the same kinds of questions you could ask of any of the secession campaigns across the country, and the fact that there are no politically rational answers is probably, in part, why many leaders of the conservative establishment do not openly support actual secession.  They know that the filibuster and the gerrymander have already let them politically secede and yet still rule this country. They know they are still ruling because they see government shutdowns structured to protect conservative priorities and they see a Democratic president endorsing conservative healthcare, Social Security and national security ideas. And most important, they know their continuing rule doesn't have to involve any of the downsides of an official secession, even though a secession has already happened.