Football gets saturated with pink breast cancer "awareness" -- and congratulates itself 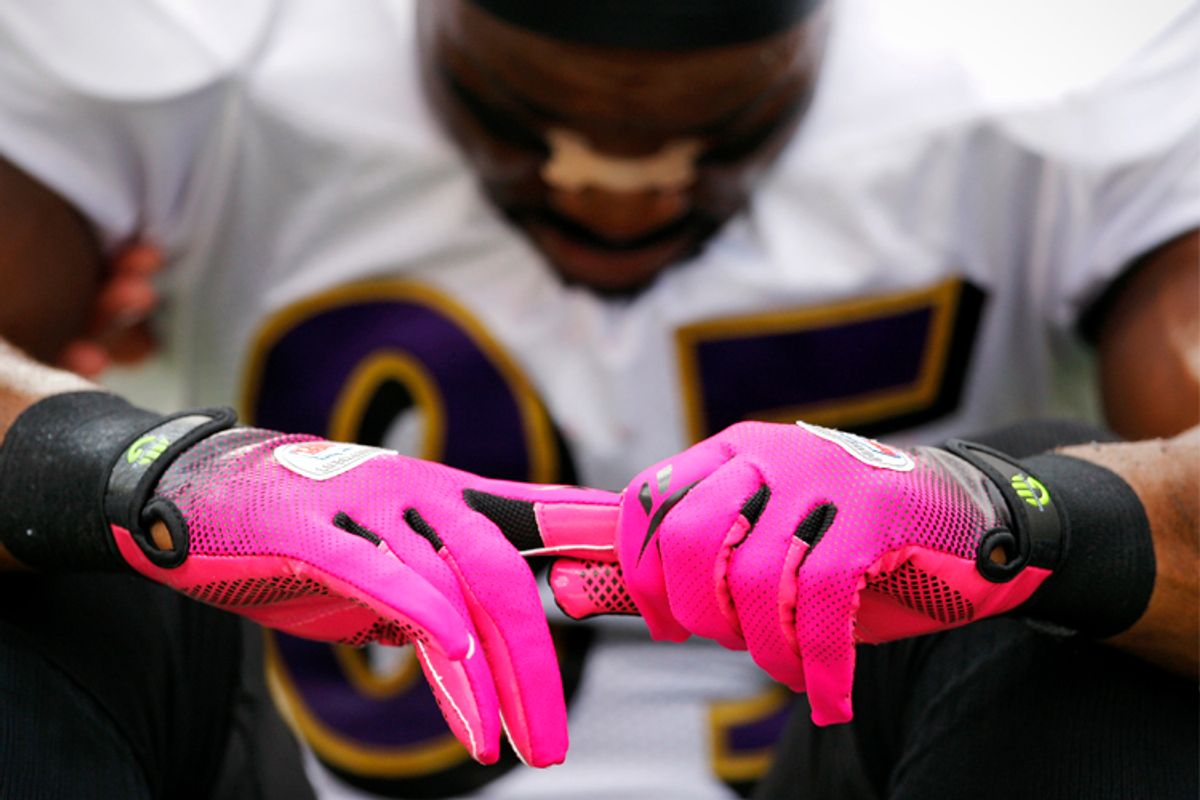 For years now, the month of October has been a cringe-inducing fiesta of sexist "Save the Ta Tas" junk and infantilizing princess-pink saturation. The authentic terror of breast cancer has been reduced to flippant, feel-good slogans and dubious charitable endeavors for "the cure." But whenever you think the bubble gum-colored fixation couldn't get any dumber, somehow the cause sinks to a new level.

Consider, if you can wrap your head around it, what will happen this weekend in Seattle. To "raise awareness," the Seahawks proudly declare that during Sunday's game "breast cancer awareness elements will include: on-field pink ribbon stencils, pink goal post padding in both end zones, pink sideline caps for coaches and team sideline personnel and pink caps and pins for game officials. Some players will wear pink elements including shoes, pin cleats, wristbands, gloves, chin cups, eye shield decals, helmet decals, Captains patches, sideline towels and quarterback towels. The referees will also use a special pink coin for the coin toss. The Sea Gals will use neon pink poms, wear neon pink boots and honor local survivors during a halftime celebration featuring local high school dance teams. The local chapter of Zeta Tau Alpha (ZTA) will distribute 30,000 pink ribbons to fans as they enter the stadium." Oh, and just in case that's somehow not enough of a statement, the stadium will be lit up in pink lights Wednesday and Thursday nights all month long.

Well, that's all great, because my friend with four kids who was just rediagnosed with breast cancer totally gives a crap about what color the Seahawks' chin cups are. And if only my friend Phoebe hadn't died of breast cancer before the miraculous day in which big strong guys dab themselves in pink towels! That would have made all the difference. Plus, isn't it adorable, the contrast between these manly athletes and all that feminine color?

There is so much about the NFL's heavy push toward "awareness" that smells like cynicism, it's hard to know where to begin. Take, for instance,  the paltry 5 percent that the league gives to the American Cancer Society on the sales of its merchandise to "support the fight against breast cancer." Take the serious questions Sports on Earth's Ryan Basen has raised over how much of the Crucial Catch campaign's money goes to actually fighting breast cancer. Take the fact that the NFL says it's trying to hammer home "the importance of annual screenings" – even though, as Peggy Orenstein pointed out in a meticulous, eye-opening Times piece earlier this year, a mammogram can "reduce, by a small percentage, the number of women who are told they have late-stage cancer, but it is far more likely to result in overdiagnosis and unnecessary treatment, including surgery, weeks of radiation and potentially toxic drugs."

Here's a reminder: "Awareness" does not "cure" cancer. ("Cure" being a stupid, inaccurate and highly fraught word anyway.) Annual screenings do not "cure" cancer either. And you can bet your sweet ta tas that 30,000 pink ribbons do squat for genuine scientific research. But you know, if you can convince people that they're "fighting" cancer while sitting on their butts drinking beer and watching men run around a field, maybe even get them to swing by the gift shop to pick up some "pink items including: sweatshirts, T-shirts, knit caps, scarves, footballs and lapel pins," that's swell. It's certainly more fun than spending 20 years hunched in a lab, or devoting yourself to a career in oncology watching women die, like the researchers and doctors who are really fighting cancer do.

There's no doubt that many players and fans truly do feel a connection to the cause, and want to do good in the world and express their love for women who've experienced breast cancer. But when a player says he's "proud to wear pink," when the modern-day gladiator arena is decked out to look like a 7-year-old's birthday party, it's particularly crass and insulting. It says, whoa, look at us, world, we care so much about cancer, we are so very comfortable in our manliness, we can even wear a traditionally female color! In a football stadium! Congratulate us for subverting the masculine paradigm!

Well, kudos everybody, but remind me again why any form of cancer ever had to take on the tint of a Barbie dream house in the first place? You want to take a stand against disease? You don't need "a special pink coin." You need real money going to real research and development, real money to real support organizations. Cancer is not a color. Cancer is not masculine or feminine. And cancer definitely doesn't give a damn about the hue of a football player's gloves.