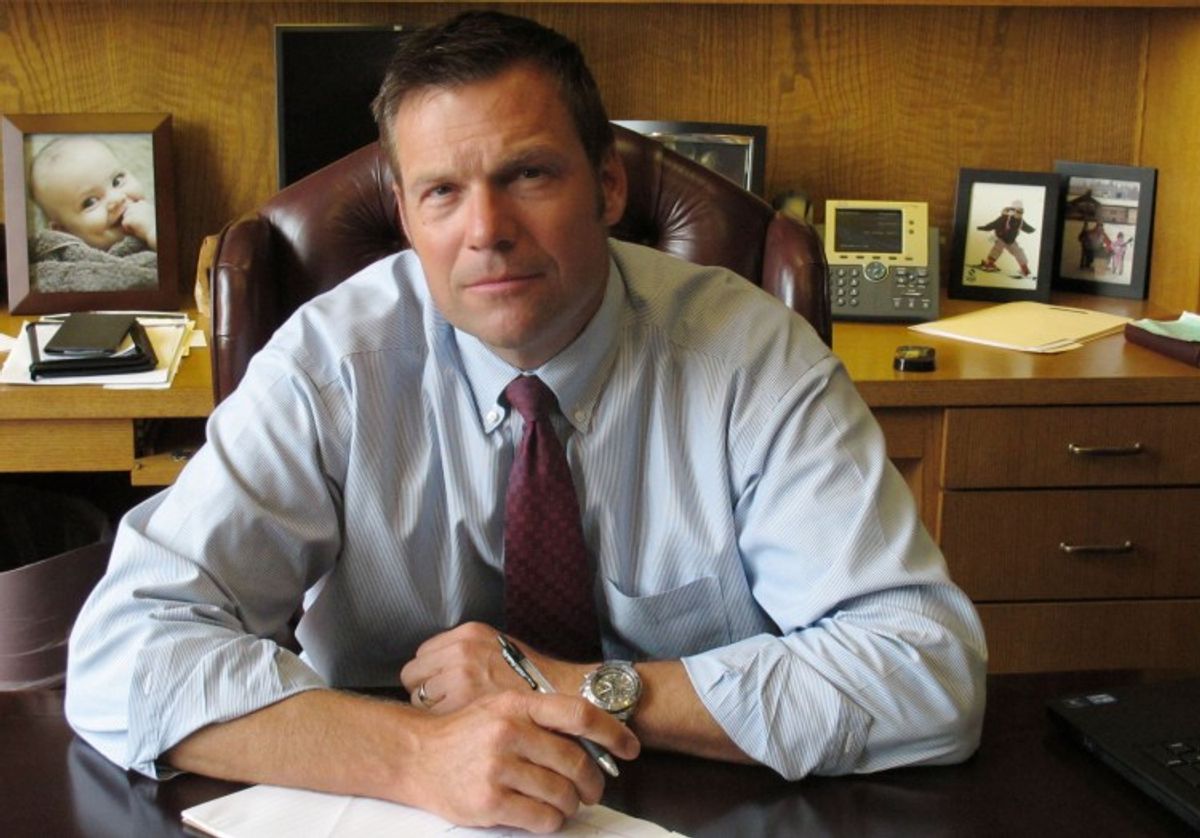 The man who wrote Arizona's "Papers Please" law before running for Kansas secretary of state in 2010 on the premise of stamping out "voter fraud" there -- before winning and subsequently not being able to find much, if any of it, at all -- is nonetheless still at work attempting to keep legitimate voters from being able to cast their vote under the premise that thousands of non-citizens are somehow, secretly, illegally voting in the state of Kansas.

Despite that annoying little truth, he now has a new plan to try and keep those "alien voters" from voting, even if it involves keeping 17,500 or more perfectly legal U.S. citizen residents of Kansas from voting as well.

Last month, we explained how Kobach's new law, requiring proof of citizenship in order to register Kansans to vote, had left more than 15,000 otherwise legal voters in limbo.

Voters who had registered to vote using the federal registration form -- as mandated by the National Voter Registration Act of 1993 (NVRA or "Motor Voter Act," since it requires local government facilities, such as DMVs, to provide a nationally standardized voter registration form) -- are now being blocked by Kobach from voting in Kansas, unless they have been able to prove their citizenship to the satisfaction of a new state law written by Kobach and passed by state Republicans last year.

That new proof-of-citizenship law took effect at the beginning of this year and has resulted in thousands of previously legal voters becoming "suspended" until such time as they present documentation to prove they are citizens. The burden is now on them to prove they are innocent, rather than on the state to prove they have broken any laws. If they don't, according to Kobach, they will not be allowed their right to vote.

Over the summer, however, the U.S. Supreme Court struck down the portion of Arizona's version of the law, where they were similarly attempting to keep voters who used the national registration form from being able to vote unless they later provided proof of citizenship. The national form requires registrants to sign an oath, under penalty of perjury, attesting that they are U.S. citizens, but it does not require actual documentation, as required under the Arizona and Kansas laws.

The Court determined that barring voters under such state laws is unconstitutional, but found that Arizona has a right to petition the U.S. Election Assistance Commission (EAC) to add that requirement to the federal form, if they like. Until then, however, states cannot deny voters the right to vote simply because they used the federal form to register.

Arizona and Kansas are now in court, attempting to require the EAC to add that requirement. But Kobach is reportedly laying the groundwork for what to do if he loses that court case.

According to the Wichita Eagle -- which pegs the number of currently "suspended," but otherwise legal, voters at 17,500 -- Kobach's plan involves creating several different classes of voters: some who can vote in all elections, others who can vote in only federal contests, and still others who will not be allowed to vote at all.

The plan creates three classes of registered voters, according to the Legislative Research report provided to [Democratic state Rep. Jim] Ward on Thursday:

Voters using either the federal or Kansas form and providing state-required documents proving their citizenship would be able to vote in all federal, state and local elections.

Voters who use the federal form but don't provide citizenship documents will be allowed to vote only for candidates running for president, vice president and Congress.

Registrants who file a Kansas form but don't provide citizenship documents will be put in suspension and won't be allowed to vote in any election.

As the Eagle notes, "The citizenship requirement is separate from Kansas' requirement that voters provide photo ID at the polls. While most people use their driver's license for that, it's generally not sufficient proof to register to vote in Kansas."

Kobach's interpretation of the SCOTUS ruling, that he may legally create different tiers of access for voters, barring some from voting in state and local elections, is itself questionable, but has some basis in constitutional authority.

"The federal government doesn't have the authority to tell Kansas what to do in Kansas elections," according to Kobach's legal analysis of the Supreme Court's decision in the Arizona case. His argument likely rests on Article 1 of the U.S. Constitution, allowing state legislatures to determine "The Times, Places and Manner of holding Elections for Senators and Representatives." Generally, federal election laws, such as the Help America Vote Act of 2002 (HAVA) have mandated requirements for federal elections, but have left states to otherwise determine the way non-federal elections are run.

"That, too, will probably have to be decided by a court," says the Eagle, which notes that the ACLU "has notified Kobach that it intends to sue in mid-November if he doesn't stop suspending voters for not filing citizenship papers." The civil rights group charges Kobach is defying the Supreme Court by creating "unnecessary bureaucratic hurdles (that) have deprived thousands of Kansans of their right to register to vote."

Election officials are also concerned about the additional problems Kobach's two-tier voter plan will cause them, in the event that the state loses the current case against the EAC and the plan for two different classes of voters is implemented. They worry they will then have to prepare two different sets of ballots for use in each election, for each of the two classes of voters allowed to vote. One ballot with all races, and another with only federal races.

"It would be a nightmare for us," says Sherman County Clerk Janet Rumpel, the immediate past president of the Kansas County Clerks and Election Officials Association.

Despite his complete inability, since coming to office in 2011, to demonstrate the "pervasive" illegal voting that he claims he was running to stop, Kobach, a hard right-wing Tea Party favorite, seems unconcerned by either the thousands of his own constituents whom he's prepared to keep from voting at all, or the difficulty new voters in Kansas now face in attempting to become enfranchised.

The Eagle reports that since the proof-of-citizenship law took effect on Jan. 1, "voting registration drives ground to a halt because of the impracticality of getting the needed documents to complete the process."

Opponents of the law, like Democratic Rep. Jim Ward, who told the paper that he registers about 400 voters "as he walks his precincts each election," hopes to be able to use the federal form in the future instead.

Ward says he once asked Kobach how voter registration workers should collect the documentation now needed to register under the new law.

"Carry a copy machine with you," he claims the secretary of state told him. "It was a snarky response, but I think it tells you his attitude toward the right to vote."

* * *
UPDATE 10:51 a.m. PT: Imagine that. Arizona's Attorney General Tom Horne has also decided to interpret the U.S. Supreme Court's ruling exactly as Kobach has in Kansas, according to Laurie Roberts at AZCentral. Horne has announced plans to create two different classes of voters in the Grand Canyon State: those who can vote in state and local elections, and second class voters who can only vote for president, vice president and members of Congress.

"Although the Court did not specifically address whether a Federal Form applicant could vote in state or local elections, the Court noted that state-developed voter registration forms could be used 'in both state and federal elections' and that the Federal Form guarantees that a simple means of registering to vote in federal elections will be available," Horne's opinion says.