The CIA agent-turned-novelist on the show's plausibility, her new book and whether things have changed since Bush 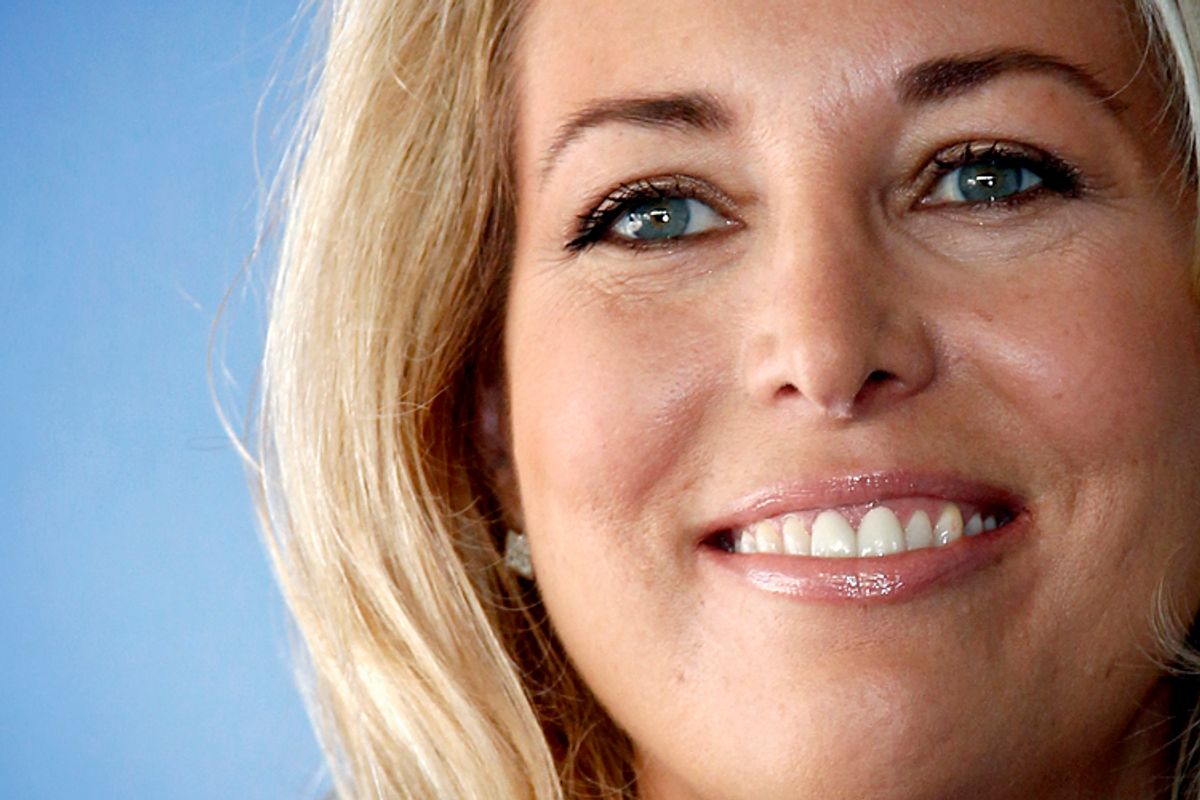 Valerie Plame's first book, a memoir, was heavily redacted by the CIA for fear that she'd expose the U.S. to harm by revealing her experience as a CIA agent.

Of course, she'd already been exposed in the first place, in one of the central scandals of the Bush administration, when her identity was compromised after her husband revealed that he did not believe George W. Bush's claims about Iraq seeking African uranium.

In the intervening years, her memoir "Fair Game" was adapted into a film and Plame, with her husband, has moved to New Mexico; she has just released her second book, a thriller called "Blowback," written with Sarah Lovett. The book takes as its plot the adventures of CIA officer Vanessa Pierson, whose asset has been killed before delivering valuable information about an arms dealer.

The book, vetted by the CIA, is intended to be both propulsive and accurate, a sideline to the sort of outspoken critique Plame has delivered since her departure from the agency. In a conversation with Salon, she spoke about how she got started in fiction, what's wrong with the current security state, and why "Homeland" disappointed her.

At what point did you decide that a novel would be an interesting way to get your experience across? Was it always on your mind? Did somebody approach you?

No! Not at all. I did “Fair Game,” which came out in 2007. And that was a memoir and a completely different animal. And I guess when the movie came out in 2010 my publisher, who had moved from Simon & Schuster to this new imprint at Penguin, he was the one who pitched it to me, to fictionalize the characters in their own way and incorporate my experience -- hopefully the fact that I loved and I enjoyed it comes across.

Your memoir was heavily redacted. Did you have to run this fictional work by anyone?

Oh, we did! When you join the CIA, you sign a secrecy contract, where you promise not to reveal sources and messages of classified information, which I completely understand and support. You’re always required to submit what you write to the agency for pre-publication review. Which I did. And they understand that this was fiction, and I’m not putting anyone in jeopardy with it, but it’s as realistic as I can be.

The first order of business for a thriller novel is to be interesting, exciting, zippy. And a lot of the things in which you’re dealing, the death of assets, these things are not merely scary in real life they’re also pretty frustrating because they jeopardize your work or make your work more difficult as an agent of the CIA. Was it challenging to make the frustrations or the mortal situations of CIA life into a thriller that people were going to want to read and be excited by?

Right, right. How do you make it realistic? Because if it’s really realistic there’s a lot of waiting around, there’s a lot of going down rabbit holes. So you have to keep your readers interested. You have to cut a lot of that out. Sarah and I tried a lot to convey a couple of things that tend to get lost in popular culture, which is: Intelligence gathering is very much a team effort. It’s not a lone wolf. You know, you don’t go very far by yourself in that kind of environment. There’s all kinds of people applying their skills and their talent to make an operation a success. So there’s that. There’s – it was very important to me that I had the spy tradecraft, as they call it in the book, right. How you communicate with people clandestinely, the use of phones not at CIA headquarters, how you move in and out of countries, the use of aliases: I tried to be as realistic as possible.

Tell me a little bit about works of fiction about the CIA -- it feels like we're at a high-water mark for coverage of the agency. Are there any elements of fictions you’d watched before that particularly bothered you?

[laughs] There was that movie with Pacino, and it was about the farm. Darn, what – do you remember?

"The Recruit"! Yeah, which was a great movie but they play the Farm as far more glamorous than it is in real life. I like John le Carré, I like Ian Fleming just because they’re entertaining, but I have yet to see something that I find pulls me in. There’ll be some passages of things, but not a series or a character that, particularly not a female character, for sure, that I thought was reasonable.

Do you watch "Homeland" at all? I love watching it, but I know it's probably not very realistic.

Oh sure! Claire Danes is a fabulous actress. The show – the first season, I don’t really know about the second season – but the first season is really compelling TV. But come on! [laughs] It’s just ... to have an agent playing at that level with some serious mental illness I find questionable. But, you know. The interesting thing, you know, it’s kind of disappointing, they only ever show a female character who is either highly sexualized or has some deep flaw.

Your time in the public eye years ago was not entirely positive -- and not what you’d chosen. As you write and promote a novel, are you nervous about publicity? Is this something you treat with some sense of dread?

Yes! The first time was a decade ago. It was 2003; it was really like going down Alice’s rabbit hole and it was very difficult for a number of reasons. And ironically it took me quite a while to come to terms with it, that my privacy was gone and that I was a public person. But over this last decade, I found that I can use my voice to talk about things that I care about deeply, whether that’s public school reform or Planned Parenthood. Things that I care about, if people might pay more close attention or read something, then OK. It’s not a natural state of being for me, for sure. I have enjoyed the process of writing. And this is fun! You know, I get to tell a lot of the tales of a really fascinating career that I love.

Was the sitting around and waiting aspect of your job as boring as it sounds, or was it stimulating in kind of its own way?

Well, I think people enjoy people-watching or not, and fortunately I’m in the former category; I could sit anywhere and watch people go by, and I find it fascinating wherever you are in the world. But, unfortunately, when you’re waiting for something, you’re rushing, you’re reviewing the plan in your head -- what you need to do, what you need to achieve in this meeting -- so it’s hardly relaxing. But it’s just part of the job, and I was always an organized person before this job, and it just heightened that whole partly-OCD aspect of my personality.

Tell me a little bit about the degree to which skills learned in the CIA come into play in your life now. Is it something you’ve just been able to put aside, or is it something that resurfaces?

I think the most prominent thing is observation. There’s a big difference between seeing and observing. I’m almost always very aware of my surroundings and what’s going on, and I try to read people. I think that whole sense was probably heightened, and it doesn’t leave you easily.

Would you say that that helped you in the creation of characters?

Oh, absolutely, because whether it's creating characters or just your observations, it’s about being interested. Everyone has a story, everyone has motivations, and what is pushing them to do one thing or another -- all that is very helpful. I have 13-year-old twins and none of those skills seem to apply to teenagers, but I’m hoping that’s an anomaly.

Do you think that the political climate has calmed down at all since the events you described in "Fair Game"? The politicization surrounding the CIA was so extreme at that time.

Well, historically, there’s always been that element that the president can’t resist, right? No matter what part of the divide they’re on. A couple things: With my husband, Joe Wilson, pointing out that the Bush administration -- and he was very much an establishment figure who had a great deal of credibility with what he had done in the first Gulf War and so forth -- and he was really the first one to point out that the Bush administration had manipulated intelligence to nurture a feeling among the American public to go to war with Iraq, why the nuclear threat was imminent. And so in 2003 it’s hard for us to believe, but it was before social media really had traction, so to me it seemed like screaming media, but if the same thing happened today it would’ve been worse in terms of people manning their battle stations or the usual suspects.

So, I know that because of the Iraq War experience, hundreds of years of operational experience walked out the door. That was really a loss for all of us. I think if we’d pulled back a little -- but a conversation for another time is the vast military-industrial-intelligence complex, which is the legacy of 9/11, and part of that is highly politicized in nature. Most CIA analysts would vigorously defend their independence and their neutral attitude when they do their jobs, and most of them would be correct. But, as we found out later, Vice President Cheney and his chief of staff over at CIA headquarters had their heads together leading up to the war so that they could get intelligence to fit their policy -- it’s as simple as that. And that vigilance has to be constantly maintained, otherwise you’re a step away from being a banana republic.

Do you think that vigilance is being maintained right now, to the best of your knowledge?

Yes. Well -- you know, I’m just a civilian now. I hope so, of course. You want to have a strong intelligence service, but you also must have really robust government oversight. Now in a related but tangential stream is what we’re dealing with with everything that’s happening with the NSA service, and I’m alarmed by our political leaders who are essentially telling the American people, “Oh don’t worry, we’re just trying to keep you safe.” I’ve focused a lot of my energy and time on that, and as those revelations continue to unfold, it’s less political interference than, obviously, as we’re finding out, the incredible intrusion of NSA deep into our lives. We need to continue to have a much more robust conversation on the balance of security versus privacy.