War criminals toast each other over jokes, as America burns 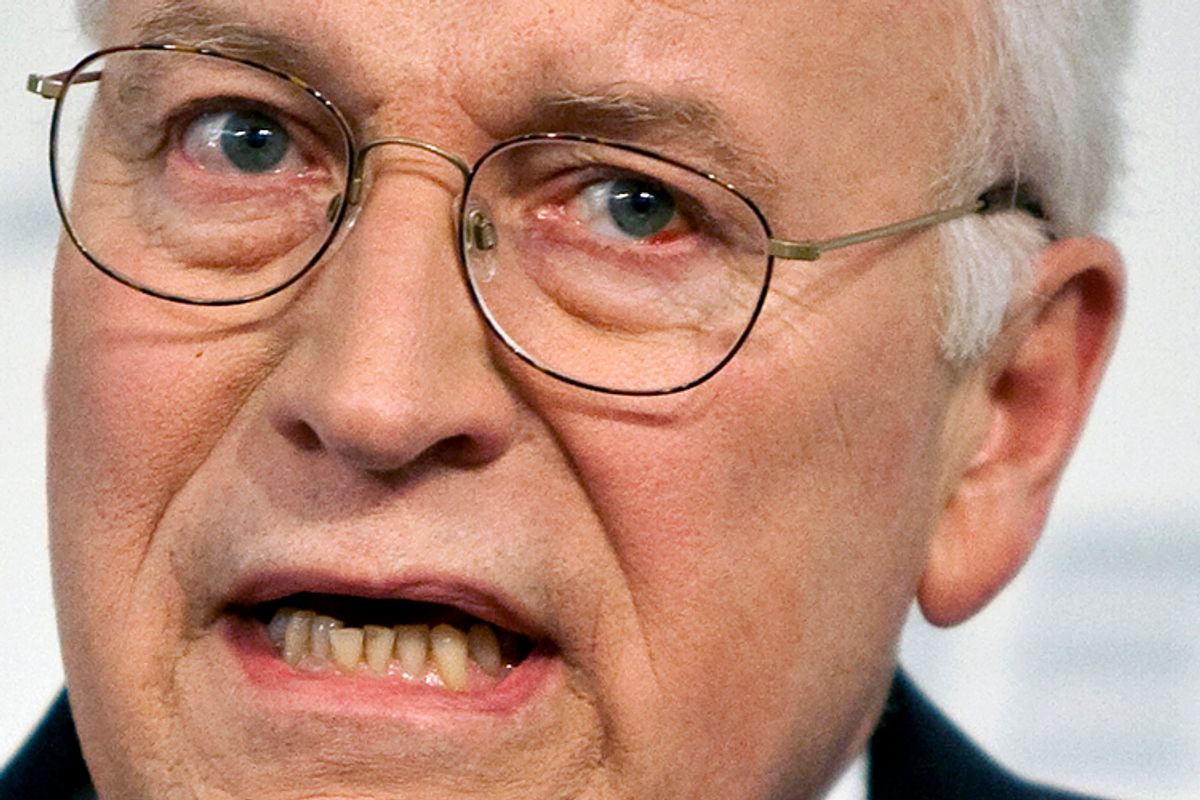 As the nation is dragged toward a debt-ceiling crisis by a band of radical Republicans determined to invalidate laws they don’t like but don’t have the power to repeal, party elders got together for a lighthearted roast of accused war criminal Dick Cheney in New York Tuesday night. The ad in Commentary read:

He was White House chief of staff. He was House minority whip. He was secretary of defense. He was vice president of the United States. Now ... he will be the main course.

Ben Smith at BuzzFeed has the exclusive details. Read them.

Apparently guests shared details of the off-the-record gala, which featured humor from Donald Rumsfeld, Michael Mukasey and spoiled nepotista (and party wrecker) Liz Cheney, who wants to be the first Wyoming senator who’s actually from Virginia. There were lighthearted waterboarding jokes, and someone – reportedly Sen. Joe Lieberman -- rocked the house by saying “something to the effect that it’s nice that we’re all here at the Plaza instead of in cages after some war crimes trial,” one of Smith’s sources told him.

At least a couple of people have a conscience buried under all their money, because they told Smith they thought some of the jokes were inappropriate. “There were some waterboarding jokes that were really tasteless,” one said. “I can see the case for enhanced interrogation techniques after Sept. 11 but I can’t really endorse sitting there drinking wine and fancy dinner at the Plaza laughing uproariously about it.”

But judging from the uproarious laughter reported, most attendees didn’t have a problem with it.

I found my blood boiling after reading Smith’s piece. Our tax dollars keep Cheney alive, on the best healthcare government money can buy, while his political inheritors shut down the government to stop the uninsured from getting help. Doctors keep trying, and failing, to give Cheney a working heart; instead, he seems to be kept alive by spite.

The former vice president and his neocon buddies couldn’t get together to reminisce about their war service, because they all ducked the military -- Cheney most famously with five deferments during the Vietnam War (which of course he supported). In fact, that’s their hallmark: You might be a neocon if … you never met a war you didn’t like, and never met one you would fight in, either. Instead, at the roast, they mocked a man who did serve, Gen. Colin Powell.

And while right-wing nut bags rail against President Obama for running up the deficit, let’s remember it was Cheney who drove that deficit with tax cuts for his wealthy friends and two wars of choice, famously telling his minion, George W. Bush, that “Reagan showed us deficits don’t matter."

In fact, Reagan showed Cheney something else: that a president could break the law, as in Iran-Contra, and get away with it. My friend Charlie Pierce at Esquire has long argued that our current political hostage situation goes back to the Democrats’ failure to do more to punish Iran-Contra lawbreakers. And in fact, the guy “who functioned as lookout and getaway driver for the Iran-Contra crooks,” in Pierce’s words, former Attorney General Ed Meese, is apparently still a key player in the right-wing ignore-the-law thug syndicate, helping craft the Tea Party strategy to shut down the government to abolish Obamacare. The Reagan undead are still with us.

Having backed down on Iran-Contra, let’s remember, Democrats saw their next president impeached after a sexual witch hunt. Then they saw Al Gore denied the White House by the right-leaning Supreme Court (Reagan appointee Scalia wrote the decision), after a vote recount in Miami was shut down by preppy GOP thugs in the famous “Brooks Brothers riot.” After that, Democrats compromised with Bush on tax cuts for the rich, an education reform bill that promised but didn’t deliver adequate funding. Most famously, a majority authorized the use of military force in Iraq.

When America had turned against the war, and the people who lied us into it, and Democrats took back the House of Representatives in 2006, Nancy Pelosi immediately took impeachment off the table. Likewise Barack Obama said “we need to look forward, as opposed to looking backwards,” when asked after the 2008 election whether he planned to investigate – not do anything about it, just investigate -- possible criminal acts of the Bush administration. (To be fair I should note that Obama has continued many Bush-Cheney national security policies.) Taking impeachment off the table may well have been the “right” thing to do for the country, but looking back, don’t you wish Democrats occasionally put the fear of God into their Republican opponents? Because they don't have any.

People are down on Canada lately for giving us Ted Cruz, but let’s be fair to Canada and remember Cheney doesn’t feel welcome there. Last year he had to back out of an event in Toronto because of fears it was too “dangerous” for him, the National Post reported. “He felt that in Canada the risk of violent protest was simply too high,” said the event promoter who had booked Cheney. The year before, the former vice president wound up trapped in a fancy club in Vancouver for seven hours after allegedly violent protesters amassed outside.

Not in New York. At the Plaza, the men who mired us in endless war while giving tax breaks to themselves and their plutocrat cronies drank wine and laughed about the good times.