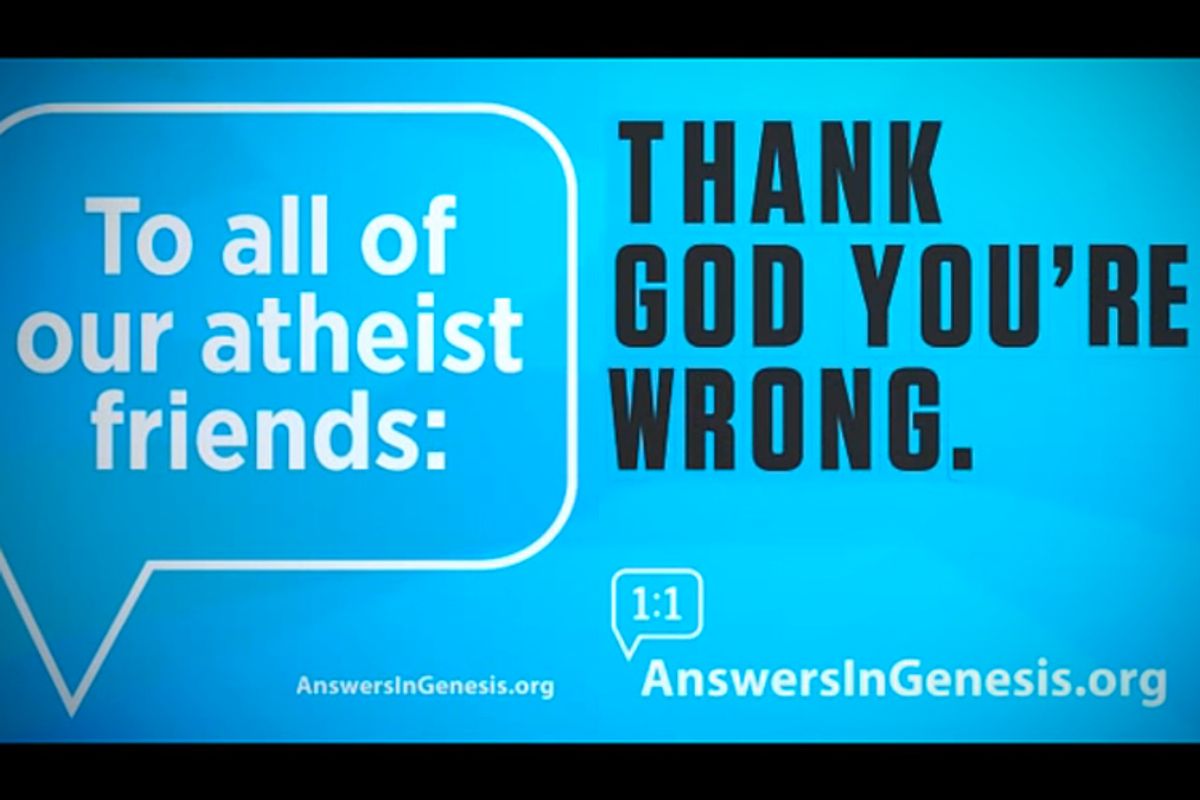 Of all the persuasive devices in the history of rhetoric, you know what's never been a very successful one? Yelling "YOU'RE WRONG" to the people on the other side of the debate. But that's not stopping an organization called Answers in Genesis from rolling out digital billboards this week in New York, San Francisco and Los Angeles declaring "To all of our atheist friends: Thank God you're wrong."

The message is confident and provocative, and it's attracted plenty of news coverage. But does that mean it's effective? Is anyone really going to stop and say, "OK, let's give this creationism thing a shot!"? The New York Times notes that in Times Square, the 15-second video spot playing on the billboard has barely raised eyebrows -- no doubt drowned out in the location's glut of retina-challenging sensory overload.

The billboard is the brainchild of evangelical leader Ken Ham and his folks behind the Creation Museum, "the Bible-affirming, creation-based" group devoted to "providing answers to questions surrounding the book of Genesis, as it is the most-attacked book of the Bible."

Ham explained his message to atheists to CNN Wednesday, saying, "The Bible says to contend for the faith. We thought we should come up with something that would make a statement in the culture, a bold statement, and direct them to our website. We're not against them [atheists] personally. We're not trying to attack them personally, but we do believe they're wrong. From an atheist's perspective, they believe when they die, they cease to exist. And we say, 'No, you're not going to cease to exist; you're going to spend eternity with God or without God. And if you're an atheist, you're going to be spending it without God.'"

In much the same way that IKEA is already festooned in yuletide swag, Ham and his merry band of ark builders appear to be attempting to get an early jump on the holiday season. In what is rapidly becoming a seasonal tradition, it's clear that once again the great WAR ON CHRISTMAS will be fought in gigantic letters, played out before people driving to work or on their way to consume some bacon mac 'n' cheese at Guy Fieri's.

Three years ago, the American Atheists paid 20 grand to place a holiday-themed billboard outside the entrance to New Jersey's Lincoln Tunnel that read, "You KNOW it’s a myth. This season, celebrate REASON!" A Christian group swiftly took that as a challenge, and slapped up its own billboard announcing, "You Know It’s Real: This Season Celebrate Jesus." And last year, the American Atheists erected a Times Square billboard that featured Santa and Jesus and demanded, "Keep the Merry! Dump the Myth!"

So perhaps Answers in Genesis felt they needed to make a preemptive strike against the American Atheists. And sure enough, Silverman's organization is ready to retaliate. "They're throwing down the gauntlet, and we're picking it up," he told CNN, adding his group is ready to "slap them in the face" with it. Oh, well, that'll open up their minds.

It's pretty obvious from their petty, nyah nyah nyah tactics that neither organization is truly interested in fostering respectful dialogue, or engaging in what surprise ally of atheists Pope Francis describes as giving room for each individual to "follow the good and fight evil as he conceives them." And while we wouldn't expect intelligent debate from a bunch of creationists, nobody needs condescending messages to so-called friends telling them how wrong they are either. Go ahead and bluster all you want, guys. Spend a fortune to do it. (The Answers in Genesis campaign will cost the organization between $150,000 and $200,000.) But thank God the rest of us won't give a damn.