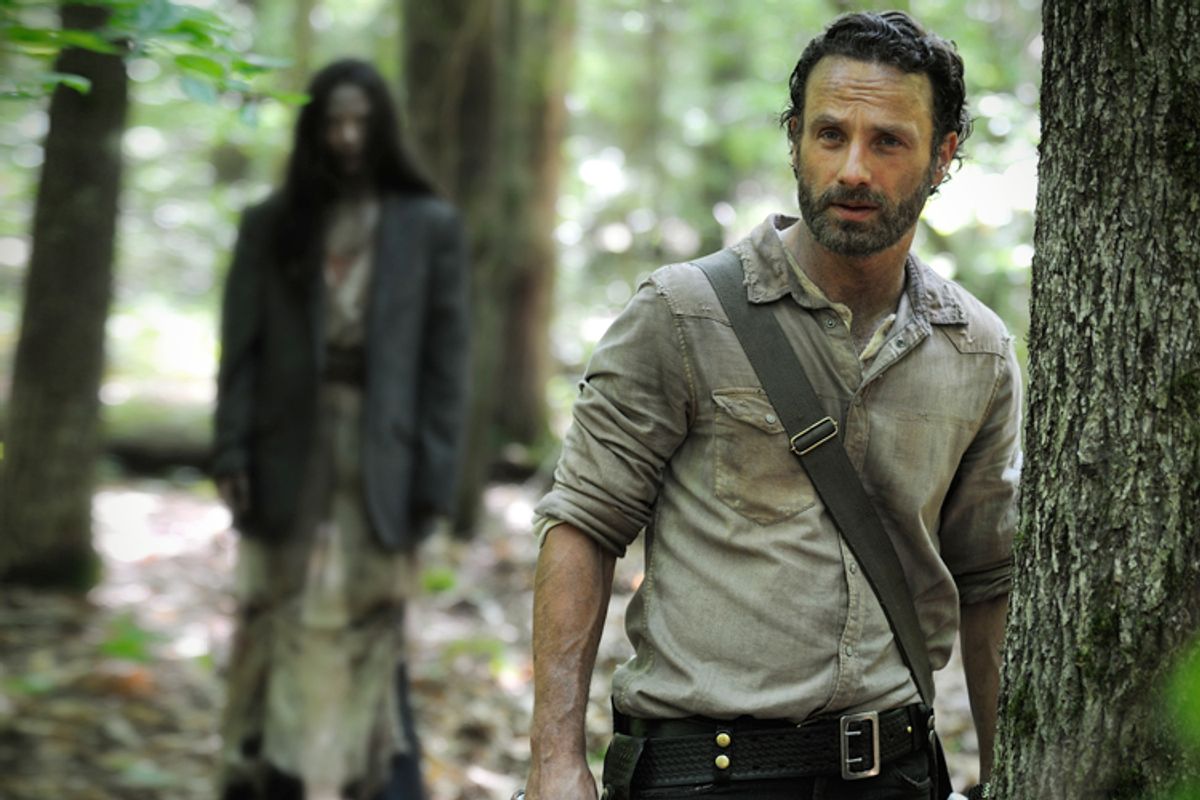 Think back to early Season 3, when the Governor first threw open the double doors of his modest estate and welcomed Andrea and Michonne to Woodbury. The two harried women had been wandering in the walker-infested wilderness for seven months witnessing all manner of death, undeath and despair. The Governor led them into the quaint but heavily guarded little town of his creation and offered them food, water, clothing, shelter -- bona fide Southern hospitality. And he made them a promise, one that should have seemed absurd after all the pair had seen and lived through. In a world where the deceased rise to eat the living and many of the living remain so only by following their basest instincts, his claim could not be more implausible. The Governor said, "You're safe here." And, against all reason, Andrea bought it.

I remember thinking her a fool for buying into this notion of a post-apocalyptic return to normalcy, that society and civility could somehow be reclaimed from the mouths of flesh-eating corpses. Miles away, Rick and the rest of Andrea's former associates were surviving the only way anyone could be expected to in this grave new world: scavenging, sleeping light, holing up in a cold but defensible prison, staying vigilant against outsiders. They had learned their lesson about settling down after Hershel's farm was so violently overrun in Season 2.

Flash-forward to Sunday night's season premiere. The prison looks different, homier. There are new faces everywhere. Rick's party has swelled and is eating well. Daryl is bringing in fresh kills and Rick is learning to plant and grow crops. In the opening sequence Rick finds a handgun while tilling the soil, watched but not threatened by the horde of undead straining at the fence. The scene quietly evokes the Book of Isaiah, Chapter 2: "And they shall beat their swords into plowshares, and their spears into pruning hooks: nation shall not lift up sword against nation, neither shall they learn war any more." The episode's ominous title, "30 Days Without an Accident," evokes Woodbury, back when a grateful and contented townswoman told Andrea, "[The] walls haven't been breached in over a month."

It seems that this beleaguered pocket of mankind has managed to turn back the tide of terror, if only just a little. The prison grounds are well maintained and policed. Daryl and Sasha (now a trained warrior) conduct raids safely and efficiently. Sure, there are still zombies threatening the perimeter, but an effective system has been developed to keep them at bay. Newcomers are being cared for and, in turn, are pulling their own weight. There are new children within the walls. Meanwhile, the mom-slayer Carl has a chance to actually be a kid, read comic books and hang with his friends. A governing body is in place to take some of the weight off Rick. Even Michonne is in good spirits, cracking wise with Carl and ribbing Rick about his scruffy chin.

If you believe lasting peace has finally come to Sheriff Rick and his adopted family, you're dumber than a walker on a chain. But I won't validate your suspicions with too many actual spoilers. What's great about this episode -- and it is one of the finest premieres that I've seen this fall -- is that it speaks to humanity's willingness to cling to normalcy. There are those who, like Andrea, want to believe that community can be restored despite such a cataclysmic change in the nature of the world. But, after close inspection, it becomes clear that each member of the tribe is wrestling with just how much to let go of that constant state of readiness.

Rick no longer carries a gun. Tyreese takes up with a partner and attempts to retreat from violence of any kind. Maggie is actually disappointed to discover that she is not pregnant with Glenn's baby, believing that raising a child within the prison walls would somehow be OK. But not everyone lives in such a state of optimism -- or denial, as the case may be. Carol hosts "Story Time" for the kids in the camp. It's a pleasant scene, but when the fairy tales are over, she instructs the children in much more valuable skills. Romance blooms for young Beth, but she has lost too much and too many to become a sucker for love.

This is not the first time that these characters have attempted to settle down. New threats always arise -- something as simple as a cold can be their ruin. With each failed attempt, they learn more about what rebuilding society would actually entail. The question is whether or not they'll survive long enough to put it all to use. There is a spectacular action sequence midway through this exciting episode that graphically and horrifically illustrates a central tenet of "The Walking Dead": Danger can come from absolutely anywhere. Even when things are looking up, don't forget to look up.