No, the "Breaking Bad" finale was not a dream sequence

Like another Vince Gilligan hero, we "want to believe" in hidden truths. But that impulse can often lead us astray 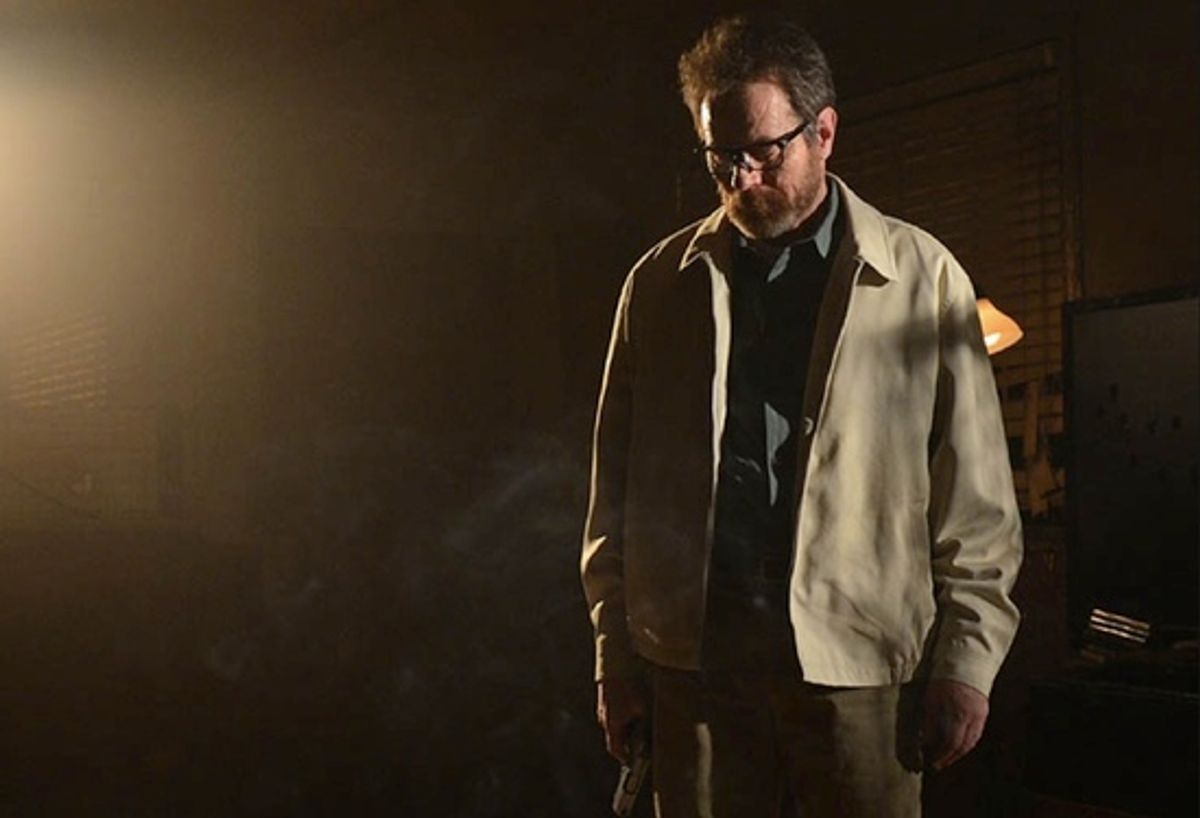 Something weird happened after Breaking Bad ended. The finale (which I reviewed here) started to garner some interesting reactions that went beyond normal criticism or analysis. Specifically, people started to spitball that maybe the final episode hadn’t actually happened — meaning, that the events we saw did not actually take place in the same narrative world as the rest of the series — and that, instead, most of the show’s final hour was a hallucination in the decaying mind of Walter White, who froze to death in his car before ever leaving New Hampshire. This theory was floated in at least two locations shortly after the episode aired: on The New Yorker’s TV blog, by critic Emily Nussbaum, and on Twitter, by comedian Norm MacDonald. Nussbaum’s contention is that everything that came after the scene of Walter in his car “possessed an eerie, magical feeling,” that things came too easily for Walter in the final episode, and that the episode would’ve made “far more sense” if the whole thing had just been a fever dream. MacDonald said the same things, basically: Walter, “the most wanted man there is,” shouldn’t have been able to do the things he did in the final episode, like quietly sneak into the cafe, elude police long enough to see his wife, and so on. (This despite the presence of narrative beats like Marie’s worried call to Skyler about how many tips the DEA had been getting about Walter’s appearance in Albuquerque, which had stretched them thin, a machination on Walter’s part that let him move through town the way he did.) This is all kind of cute, and even enjoyably creative on a certain level, but it’s also totally wrong.

For starters, Breaking Bad was just not that kind of show. There were plenty of departures from a linear narrative — the second season’s cold opens showing the wreckage of Wayfarer 515, the occasional flashbacks, the music video — but this was still ultimately a show committed to telling a very specific story and doing it in a very precise way. The world of Breaking Bad could be heightened and pulpy and violent, but it was also internally consistent. There were no supernatural elements to explain away motive, no mysterious forces that had a hand in things. Creator Vince Gilligan and his fellow writers and producers were devoted to exploring the fallout of a single question: What happens when a good man decides to become evil? They did this through drama rooted in causality, and they did it with a commitment to craft and consistency that’s fiendishly hard to pull off.

Yet I don’t think that matters for some viewers. I think some people want a grander mystery or conspiracy simply because they’ve trained themselves to expect one. (And the beauty of conspiracy theories is that absence of proof is treated like the presence of proof.) Part of it has to deal with the outsized expectations placed on series finales in previous years, from the sitcom episodes that tried to balance laughter with a poignant summation of everything that had come before, to the dramatic finales that tried to shoot the moon and go out in a blaze of, if not glory, then certainly infamy. Finales that try to blow up the world they spent weeks or years building are eye-catching, but they’re just as likely to be bad, clumsy storytelling. They aren’t trying to satisfy a narrative but to shock the viewers. People are still talking about the ending of St. Elsewhere, which seemed to posit that everything that had happened on the series’ 137 episodes was actually just the intricate daydream of an autistic boy. This is a fantastic ending if you’re looking to startle the viewer, but it’s completely stupid from even a half-assed view of drama. Even looking back on the show close to 25 years later, the cast could only express disdain, confusion, or tight-lipped versions of “no comment” when asked about the twist ending. (My favorite non-dismissal dismissal is probably Mark Harmon’s: “They made a choice, and the choice is interesting.”) According to the cast, the writers weren’t even trying to make a statement, but looking for a way to preclude reunions and spinoffs. That’s not storytelling, that’s salting the earth. But kicker endings like that primed TV audiences for years to expect not just finales, but grand finales, as if the point of the series wasn’t to entertain or tell a story but to set up some incomprehensibly great final installment.

The ebb and flow of the popularity of mystery-reliant shows amplified things. Twin Peaks solved its central mystery after a few episodes but just kept going until it backed itself into a corner and died an unfortunate death. The X-Files ran for nine seasons and got tangled in a number of increasingly convoluted conspiracy stories, ending with a sigh in 2002; in 2004, Lost premiered and started everything back up again. There always seems to be room in pop culture for a TV show that’s not just big but mysterious. Breaking Bad was definitely big, but it was anything but mysterious. To try and graft some kind of otherworldly, rule-bending, wall-breaking finale onto the show doesn’t track with the series Gilligan spent so many years perfecting. It’s a sloppy, selfish move born of a blindered view of TV history, and one that doesn’t have any place in the show’s legacy.

We want to act as if there’s some other hidden truth out there; we want, like Fox Mulder, to believe. But that impulse can make us miss what’s happening right in front of our eyes. We always want there to be some kind of extra meaning (one writer is even trying to come up with one for Gravity; here’s a spoilery story about it if you feel like pulling your hair out). Maybe it’s because these TV series enter our lives for years and we wind up feeling as if we own them, or at least a part of them. And that’s understandable. But many — most — TV series are not games filled with red herrings and clues. Inventing a theory that happens to fit some of the facts on display doesn’t mean you’ve come up with a new way to read a series or episode; it just means you’re throwing more crap at the wall to see what sticks. Gilligan and co. made a challenging, gripping, often morally fearless show, and it’s a disservice to them to try and rewrite their text instead of receiving and analyzing it. When I see headlines like “Creator Vince Gilligan explains series finale”, I wonder, what is there to explain? There’s plenty to talk about in terms of plotting, execution, and emotion, but to explain? Breaking Bad is worth watching, and worth watching again, but there is no great conspiracy here. There is only a chance to watch a character tear his life apart, and to wonder whether we’d be willing to take the same journey. It’s about the hell of the human condition. Isn’t that mystery enough?