In a speech to the religious right, Paul ties restrained foreign policy to a "worldwide war on Christianity" 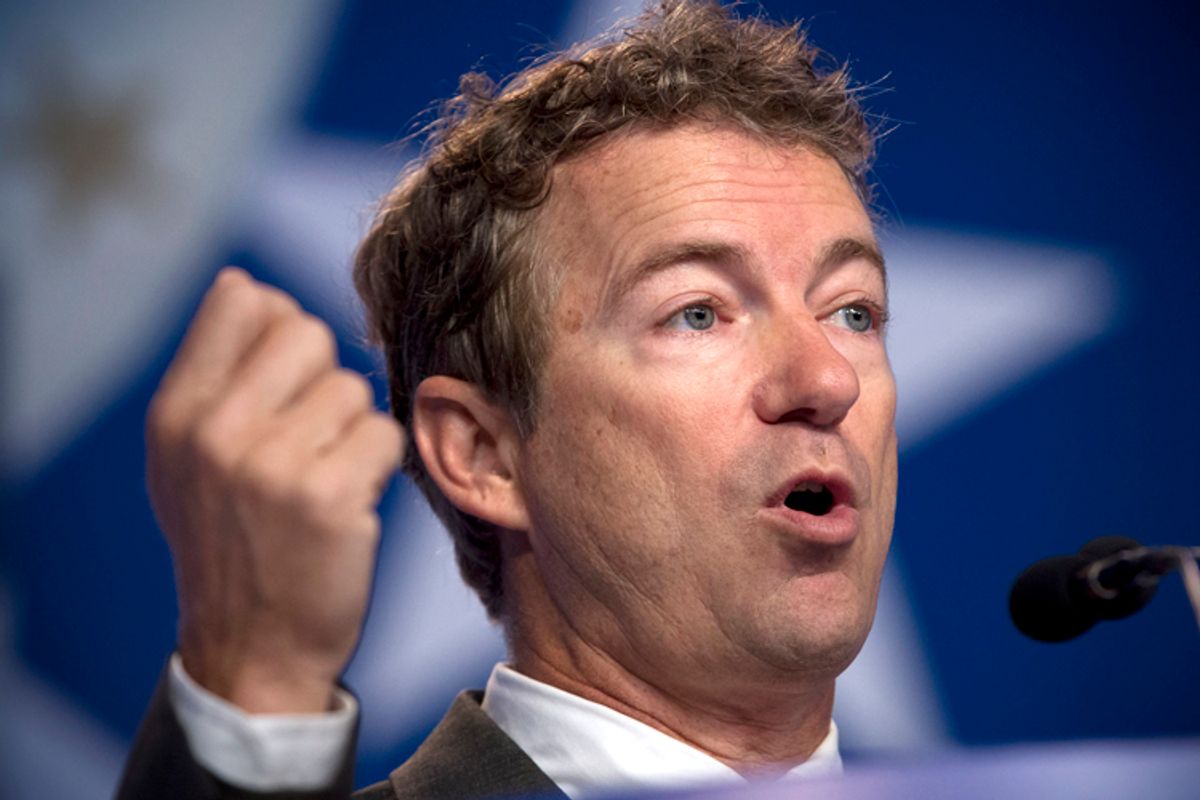 For normal Americans, the annual Values Voters Summit is an opportunity to take a look at the Republican Party and be appalled and amused at how vehemently anti-modernity and hysterically bigoted it remains despite basically all demographic trends. For Republican politicians, it is an opportunity to say crazy stuff to adoring crowds in the hopes of riding their enthusiasm and donations all the way to second or third place in the next Republican presidential primary campaign. Sen. Rand Paul today addressed the summit, and he wanted everyone to know that while he may have a bit of a "peacenik" reputation, he definitely hates Islam just as much as the people who want to bomb the Middle East forever.

Paul's speech (which greatly resembles one he gave to an evangelical audience last June) hit nearly every toxic fixation and delusion of the evangelical Right. He generously indulged the persecution fantasy that fuels so much of the modern conservative movement, claiming that "there's a worldwide war on Christianity," waged largely by Islam, but also by "liberal elites." It is "a war that the mainstream media is ignoring," he said. Mainstream media liberals are too scared and too PC to say it, but Paul wasn't: We must blame Muslims more or less as a homogeneous undifferentiated mass.

Ever since 9/11, commentators have tried to avoid pointing fingers at Islam, which is somewhat fair. It is fair to point out that most Muslims are not committed to violence against Christians, but it’s not the whole truth. The whole truth is – and we shouldn’t let political correctness stand in the way of this truth – the whole truth is that there is a minority of Muslims who condone killing of Christians, but, unfortunately, that minority number is in the tens of millions.

The entire speech was like this, really: Bits of "reasonable" rhetoric awkwardly jammed against Pamela Geller-style accusations of collective guilt. Plus a bit of subtle insinuation against President Obama, who, Paul explained, keeps insisting on arming radical extremist Muslims dedicated to wiping out Christianity. (Why would he do that? Where do his true sympathies lie, exactly?)

And after all this fear-mongering, Paul said that waging "conventional wars" against the Great Muslim Menace would be impossible and probably counter-productive. Paul's Islamophobia, like his endorsement of the "worldwide war on Christianity" fantasy, seems more "strategic" than sincere. (Obviously, that does not make it any more justifiable.) His point is to make his restrained foreign policy fit into the existing right-wing Republican mainstream. The arguments used to sell evangelical conservatives on Republican foreign policy are generally based on fear of or hatred for the Islamic world, and religious attachment to the state of Israel. Paul's argument is that the truly pro-Israel, anti-Islam foreign policy would be one in which we largely stop engaging in the region, instead of sending aid (always politically unpopular) to "good" Islamic countries and waging war against "bad" ones.

Paul's been quietly making himself acceptable to the "conservative mainstream" (by which I mean the right wing of the right wing, but not the insurrectionist destroy-the-party Cruz wing) for a while now. Look at Paul's near-complete absence from the shutdown and debt-limit circus. He's said the requisite crazy nonsense about the debt limit, but he's purposefully limited his participation in the intentional disaster.

This is all rather obviously being done with a presidential run in mind (and I beg your forgiveness for talking about 2016 in 2013, but it's sort of the point of the Values Voters Summit). It seems like his calculation is this: In 2016, as always, there's going to be a "mainstream" guy and a more "pure conservative" evangelical guy. The "mainstream" guy -- backed by the donor class, hopefully acceptable to non-crazy voters -- is probably already Christie or maybe Jeb Bush. Usually the "mainstream" guy wins, but Paul is likely hoping a bit of the Paul rEVOLution cult fanaticism helps him do what Huckabee and Santorum couldn't. Will it work? It's certainly savvier than Cruz's plan, which is "go into 2016 beloved by a marginal activist base but loathed by every powerful person in the party."

The Republican Party will not suffer a Whigs-like collapse in the next three years (sorry!), so embracing hysterical paranoia about the entire Muslim world is still a pretty risk-free way to establish your conservative cred without pissing off anyone important in Republican politics. The only question is whether "hate them but don't necessarily bomb them" will beat out "bomb them for their own good."