Switzerland will vote on giving every adult in the country a $2,800 check every month. How would that work? 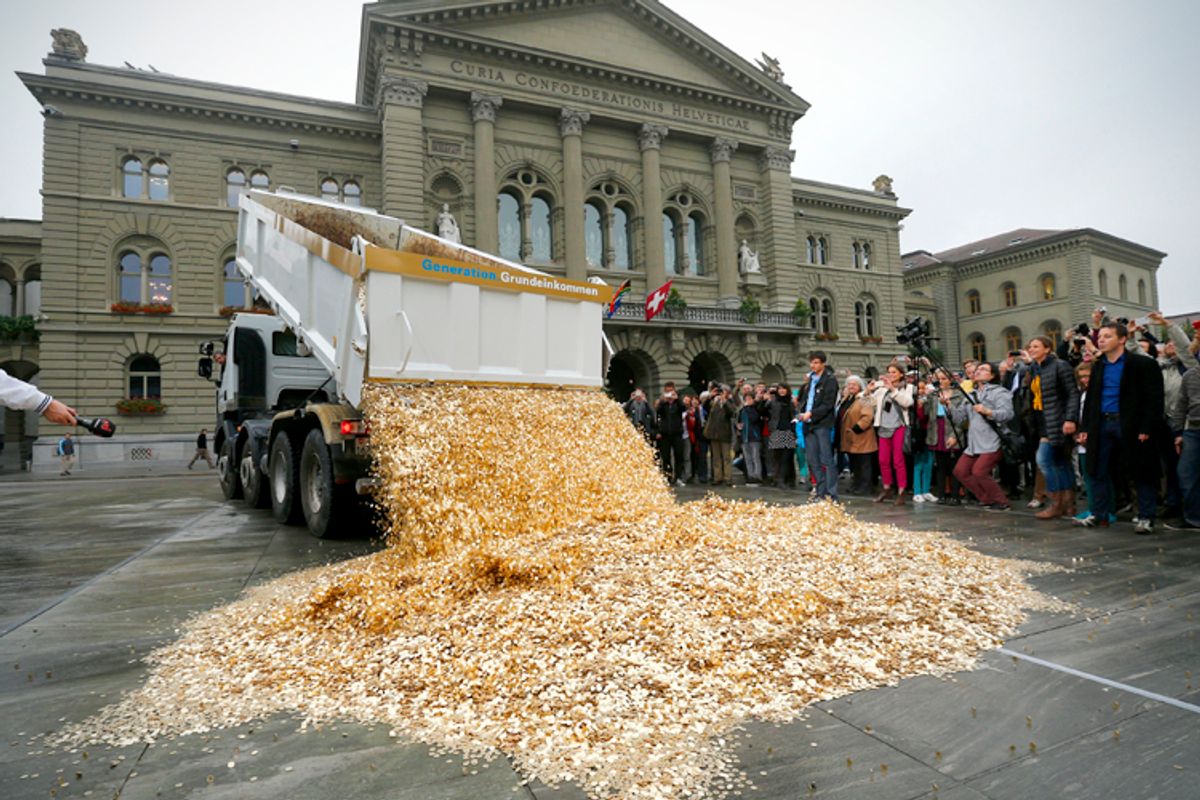 By gathering over 100,000 signatures – which they delivered last Friday along with 8 million 5-cent coins representing the country’s population – activists have secured a vote in Switzerland on an audacious proposal: providing a basic monthly income of about $2,800 U.S. dollars to each adult in the country. (A date for the vote hasn’t yet been set.) Such basic income proposals, which have drawn increased attention since the 2008 financial crash, offer a night-and-day contrast to the current U.S. debate over what to cut and by how much.

Salon called up John Schmitt, a senior economist at the progressive Center for Economic and Policy Research, to discuss the economics and politics of having the government send everyone in the country a monthly check.

What is a universal basic income, and why are we hearing more about it now?

The proposals that are floating around the world vary a lot. But the basic idea is, no matter what you do, if you’re a resident -- or in some cases, a citizen -- you get a certain amount of money each month. And it’s completely unconditional: If you’re rich you get it, if you’re poor you get. If you’re a good person you get it, if you’re a bad person you get it. And it does not depend on you doing anything other than making whatever effort is involved to collect the money. It’s been a topic of discussion for several decades. Why is it happening right now? I think it’s obvious that it’s a reaction to the high level of economic inequality that we’ve seen. Most European countries haven’t had big increases in inequality at the same scale that we [in the U.S.] have, [but] some of them have had much more than they’re used to.

Some have argued that the mass anti-austerity protests and strikes in Europe have been relatively unsuccessful at changing policy. Do you think that’s so? Is that related to this movement?

I think it’s very clearly the case that the political action that’s been taken so far has not been able to end austerity. I would say, certainly in the case of Greece, the political activism strengthened the hand of the government negotiators with respect to what the final agreement between various authorities and the Greeks would be, because the Greek government could point out the window and say, “You know, if we don’t get a better deal, there’s going to be more of what we’ve seen in the streets.”

What strikes you about the contrast between the current U.S. budget shutdown and the conflicts over austerity in Europe since the crash?

The debate is so different in the United States. We are basically in the midst of a government shutdown because one party wants to give people insurance, and change for the better the terms people have in negotiating with their insurance companies. We’ve shut down the government for something that is taken for granted [elsewhere]. There’s almost no political parties in Europe that would argue actively for dismantling their healthcare system. In fact one of the reasons why the far right has grown in many countries in Europe is precisely because social democrats have participated in cutbacks to the social welfare system, and the nationalist right has said things like, “The reason why the government is cutting back is the rise in immigrants, who are making it impossible to afford our social welfare system.”

Here [in the U.S.], we have much higher levels of inequality, we have much less by the way of political leadership from the unions, because the unions are a lot smaller and less powerful, and we don’t have a strong social democratic tradition.

The European debate on guaranteed income has been somewhat divisive on the left. Because on the one hand, it’s a very generous way to provide support for people who desperately need it. On the other hand, it threatens the existence of the existing social welfare systems there, because it’s very hard to finance both the full set and full range of social welfare institutions that exist already, and side by side to give people $2,800 a month, or even substantially less than that.

You’ve written about left critique of basic income before. How concerned are you? How do you think that potential tension will play out?

My fear is that it’s possible for a coalition of completely well-intentioned and idealistic -- with no negative connotation to that -- people on the left to support what would be a very generous basic guaranteed income, in a coalition with significant elements on the right, including the libertarian right, that has basically the motivation that this will undermine existing social welfare institutions, potentially undermine public-sector unions. Because a lot of the services -- health, education, housing -- might become much more marketized and privatized.

I mean, it would in principle be possible to provide both a guaranteed basic income and maintain the level of the social welfare system that exists in this  country. But politically, that’s an extremely heavy lift. Protecting an existing welfare system which is under attack, while implementing an astonishingly new comprehensive, generous addition to that, without any negative effects on the existing system - I just find that very hard.

So what are the merits of universal basic income?

We have a system that has high unemployment, high underemployment. This would allow people to survive and to live, with dignity, assuming that other systems stay in place. It puts a floor under wages -- people could say, “I don’t have to do that job if you’re not going to pay well.” People could pursue a lot of activities that are not particularly well paid but that have a lot of social use or personal satisfaction: art, creative work, volunteer work, working with people who have disabilities.

So if we were a very rich world, which I think we are to a certain degree, it would be a remarkable way to make sure that people could maximize their ability to express themselves but also maximize their ability to participate in the communities that they live in in a full way. Stay home and take care of kids if that’s what you want to do. Take care of your parents when they’re old and sick.

People sometimes refer to this as a kind of "Star Trek" economy -- you just said, “Replicator, make me a ham sandwich.” There wasn’t any social conflict around production and consumption. And that, I think, is that kind of ideal in which this kind of a thing could play out. We are probably there in terms of the economics. We are very, very wealthy -- we could afford to do this. But we are not there in terms of the politics.

How directly do you think this kind of policy challenges the politics we see here in the U.S. around the work ethic -- this focus on designing policies, or opposing them, for the sake of making sure everybody seeks out a job, even if it’s a low-paying one?

I don’t think that the politics in the United States are remotely open to this. You can make a sophisticated argument that it actually takes away the tax that often falls on people when they have conditional benefits [in that such benefits are taken away when you cross an income threshold] -- there is a possibility that the incentives could work in a positive way toward people working more.

But just think for a minute: I mean, what are the politics in the United States on the right that would allow somebody to vote for a program that literally pays people if they do nothing? And that would very quickly become “it pays people to do nothing.” And similarly, I think it’s hard to imagine centrist Democrats or center-left Democrats supporting something like that, because they would be called out. Especially in a context where race is going to play for sure.

Social scientists have argued that American hatred for “welfare” is racially coded, and that historic support for stronger social programs in Europe has been tied in part to ethnic homogeneity and lower immigration.

I think that’s an important part of the dynamic.

At the end of World War II, many European countries had strong social democratic traditions and strong unions, and they shaped welfare systems that had their problems -- they were very oriented toward a male breadwinner -- but their initial tendencies were toward universal programs that covered a lot of aspects of people's lives. In the U.S., we built a kind of social welfare system that had a built-in sunset: the GI Bill. So we provided education and housing to GIs, and as those men who had fought got older, the system kind of faded out.

You have to add on top of that [that] at that time most European countries were fairly homogenous. They had much less by way of immigration. They did not have a civil war based around slavery.

A guaranteed basic income would be something that would be, in the current [U.S.] context, immediately politicized and seen through a lens of race. It’s not a reason not to do it, but it’s hard to imagine that it could not be front and center in the discussion.