Republican moderates have another opportunity to stand up to Ted Cruz's forces, and prove they are not all talk 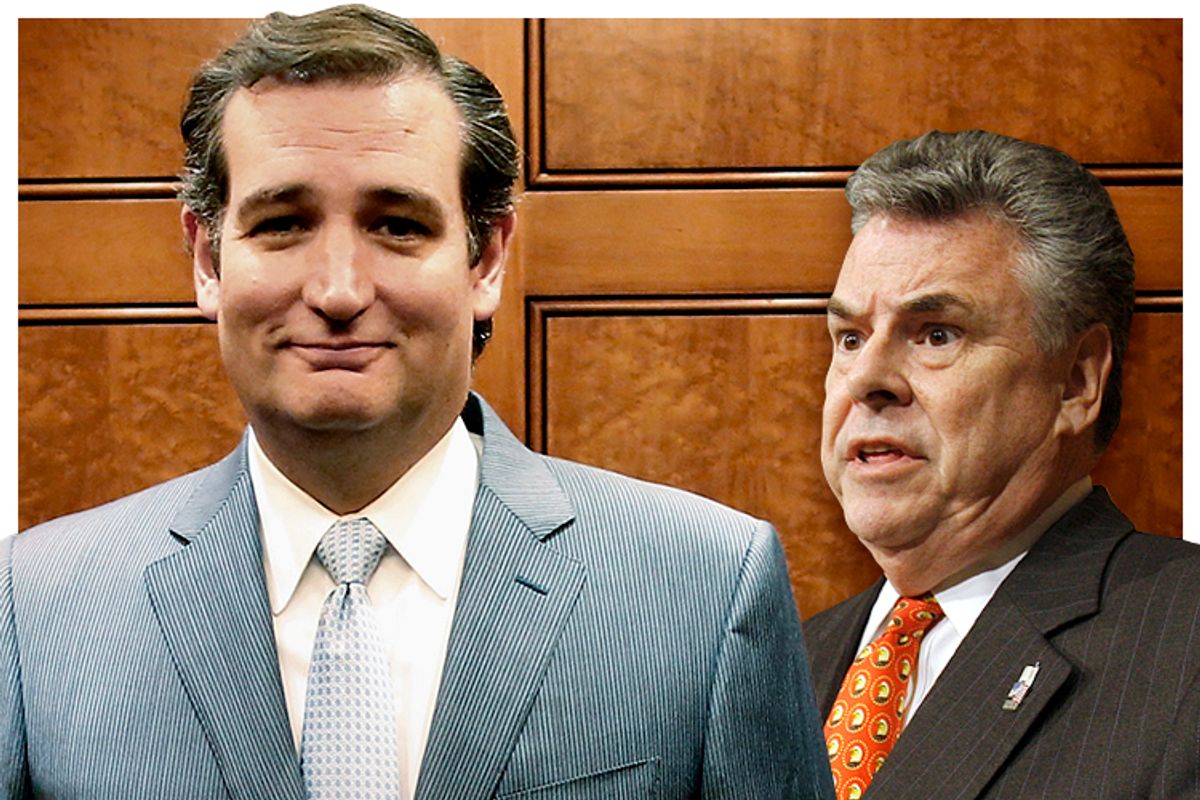 Ever since conservatives staged a strategic coup and forced a government shutdown on skeptical Republican leaders, a band of House Republicans led informally by Rep. Peter King, R-N.Y. -- most of them from competitive districts -- has been bellyaching about the mess they created.

The moderate-conservative civil war is entertaining to watch, but it has been consistently defined by the sane caucus' unwillingness to wield its power as ruthlessly as the insurrectionists. The two camps are roughly the same size, and thus possess the same leverage. Doing almost anything in the House requires simple majorities, and that means fewer than 20 Republicans in the current Congress can align to make considerable mischief. The hard-liners' power stems from a threat to deny John Boehner the majority he needs to keep his speakership; the moderates' from the theoretical ability to deny conservatives the majorities they need to pass actual bills.

But while the hard-liners cowed Boehner into the shutdown, the moderates have relinquished every opportunity they've had to bring it to an end. By forswearing their own power, they've given conservatives carte blanche to continue a crisis of their choosing with no clear endgame, and convinced everyone involved that their whining is insincere, their threats toothless.

The debt limit could give them one last chance to redeem themselves.

House Republican leaders have proposed increasing the debt limit for six weeks with no strings attached -- other than a commitment from Democrats to enter budget negotiations immediately after the extension is enacted. (Democrats, of course, have been asking for threat-free fiscal negotiations all year.)

That's a significant retreat from their earlier position, and almost enough on its own to end the standoff altogether. But for now, these Republicans say they aren't ready to end the government shutdown simultaneously. Conservatives are still locked into the fantasy that the shutdown will force Obama to badly undermine his own healthcare law. Combine that with the fact that President Obama won't reenter budget talks under the duress of GOP budget crises and suddenly we have a predicament.

The dilemma led the New York Times to report briefly Thursday night that Obama had "rejected" the GOP's debt limit plan. That headline misidentified the source of the disagreement, and overstated the extent of it. It's even possible that Obama and GOP leaders will resolve their differences among themselves. But if they don't, it'll provide moderate Republicans the opening they need to reclaim some of the honor they've sacrificed over the past couple of weeks.

If Republican leaders don't address Obama's objections, Democratic votes will be very hard for Boehner to come by. The only way his plan would pass under those circumstances is if Republicans supported it overwhelmingly.

That's when the moderates could make their move. If reopening the government is as important to them as they claim, they could follow the Democrats' lead -- withhold their votes, unless Boehner agreed to end the shutdown too.

It would constitute a complete reversal for them. Over the past week and a half, they've sided with their party on every procedural vote, including ones that would have ended the shutdown had they the will or the courage to buck Republican leadership. They have likewise laughed off a Democratic petition that would guarantee a vote on ending shutdown if just a few of them would agree to sign it.

In other words, it's easy to imagine them demonstrating one final time how disingenuous their complaints about the shutdown have been all along. And if Boehner's plan passes the House as conceived, it'll fall to Harry Reid to sweep away the mess the moderates have been too sheepish to clean up themselves

A no-strings government funding bill has already passed the Senate on a bipartisan basis, and there would be nothing other than the passage of time to stop them from tacking it onto a House debt limit bill. Once it returned to the House, it would pass easily with both Democratic and Republican votes.

There are a handful of other ways the story could end, and little reason to worry that the crisis will flare up again. But if it ends with the Senate bailing out moderate House Republicans, bookmark this story for easy access when Peter King or Charlie Dent claim, as they predictably will, that they were leading opponents of the shutdown all along.