The victory of Malala Yousafzai

She didn't win a Nobel Prize Friday, but she attained a greater triumph 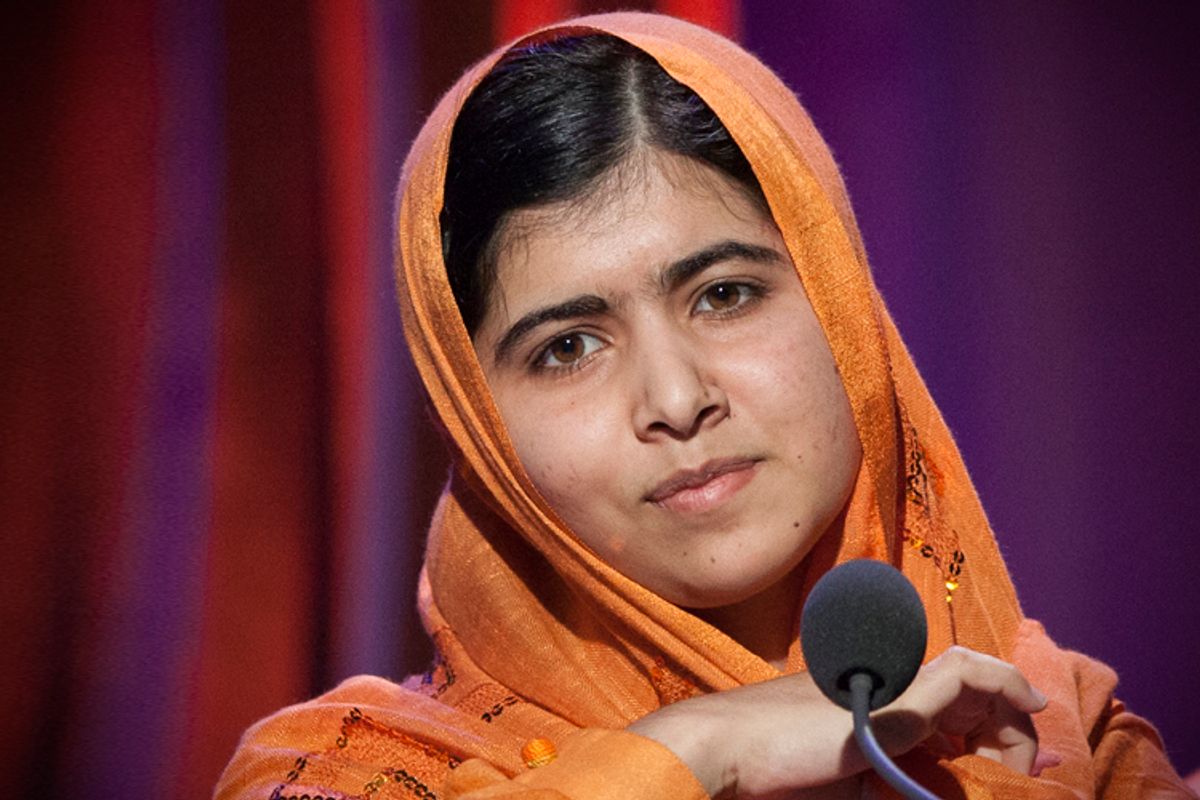 She didn't win a Nobel Peace Prize on Friday morning. That honor instead went to the Organisation for the Prohibition of Chemical Weapons. But the great success of Malala Yousafzai's 16 years of living isn't necessarily the sort of thing they hand out awards for anyway. It's that she made it to 16 at all.

The Pakistani teen, the youngest-ever Nobel Peace Prize nominee, began her career in activism in 2009 at age 11, blogging anonymously about her life under the Taliban. And when the Taliban began blowing up schools and forbidding girls from going to class, she kept on writing. She grew more outspoken and identifiable in her work, appearing in interviews. She began receiving death threats. And then, a year ago, she was shot in the head by a masked gunman while riding home from school with a group of other girls.

But even a bullet couldn't silence her. She was taken to England to recover. In the year since her attack, she has healed from her wounds, and she has bloomed into an even fiercer champion of education for girls. She launched the Malala Fund to fight for the rights of the "600 million adolescent girls in the developing world." She produced the book "I Am Malala" to tell her story. She's spoken before the UN. She was a runner-up for Time's Person of the Year.

And through it all, she remains an active target. Taliban spokesman Shahidullah Shahid told The Associated Press recently, "If we found her again, then we would definitely try to kill her. We will feel proud upon her death." But when Jon Stewart asked her earlier this week what she'd say if the Taliban approached her again, she left him speechless when she replied, "I would tell him how important education is and that I would even want education for your children as well. That's what I want to tell you, now do what you want." She has refused to give in to threats and intimidation; she's shown the world that nothing scares terrorists like an educated girl.

From her Malala Fund's official Twitter account Friday, Yousafzai offered "Congratulations @OPCW on winning the #Nobelpeaceprize and your wonderful work for humanity" and she said she was "Honoured to have been nominated." A year ago she was in a hospital fighting for her life. Today she's a leader of a global movement. Someday, she says, she'd like to be Prime Minister of Pakistan. And if she likes prizes, she's got prizes. She's won the Amnesty International Ambassador of Conscience Award. Just this week she was awarded the EU's top human rights award, the Sakharov Prize for Freedom of Thought. But she didn't get shot so she could pick up accolades. She got shot because she was saying things the Taliban didn't like. That she is still here and still saying them is her immense achievement. To go on living, in spite of the odds, is a victory every day. To be heard in the world is a towering triumph. Writing in the Guardian Thursday, Dhiya Kuriakose speculated about the Nobel system and said, "Prizes should be handed out at the finish line." And the victory of Malala Yousafzai is that she's just getting started.