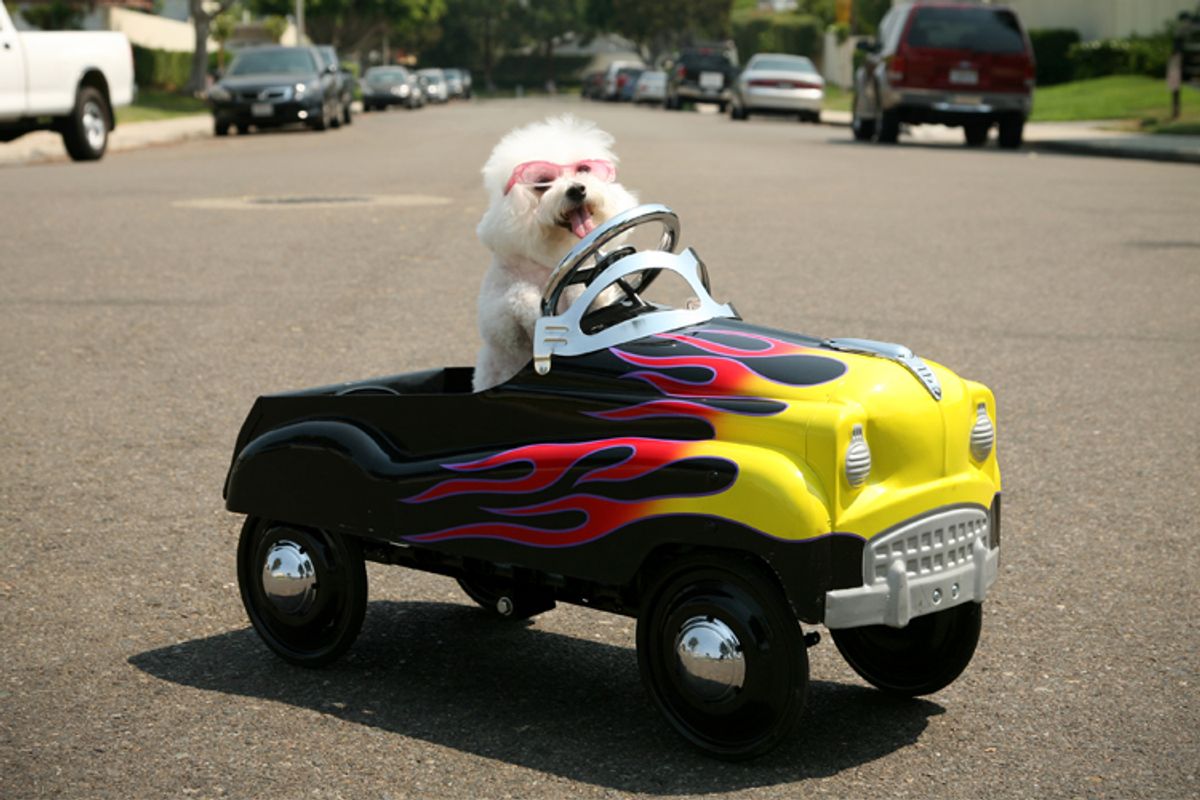 Are dogs really people? Gregory Berns seems to think so. On Sunday the New York Times ran an op-ed by Berns, a neuroeconomist and author, titled "Dogs Are People, Too." But all the puppy-friendly Halloween costumes in the world can't turn a dog into a person.

Berns's argument rests on a finding that his research group reported last year in the journal PLoS ONE: While they sat in an fMRI scanner, two dogs were shown human hand signals that indicated food or presented with the scent of their owners. Both food signals and the scent of an owner are rewarding to a dog. Those things make dogs happy. As a result, the caudate nucleus in each dog's brain showed increased neural activity in response to those reward-related stimuli. More precisely, the scan showed an uptick in the amount of oxygen used by that clump of neurons.

Berns's lab is putting out some really interesting research that will indeed allow us unique insight to dogs' minds. But that research is still in its infancy. In fact, the most remarkable part of his study might just be that he was able to train dogs to lie still in an MRI scanner!

Still, he jumps from a study of two dogs responding to positive emotional stimuli to the claim that dog emotions are comparable to those of human children.

Do these findings prove that dogs love us? Not quite. But many of the same things that activate the human caudate, which are associated with positive emotions, also activate the dog caudate. Neuroscientists call this a functional homology, and it may be an indication of canine emotions.

And, he adds, "the ability to experience positive emotions, like love and attachment, would mean that dogs have a level of sentience comparable to that of a human child."

Not so fast. But it's worth backtracking a bit first to clarify some definitions.

An emotion is simply the body's physiological response to an external event, whether positive or negative. Neuroscientist Jaak Panskepp, famous for discovering that mice laugh when tickled, provides a good definition. He writes that emotions are "processes which are likely to have evolved from basic mechanisms that gave animals the ability to avoid harm or punishments and to seek valuable resources or rewards." Emotions are thus highly adaptive, driving animals to seek out pleasant stimuli like food and to avoid negative stimuli like the teeth of hungry predators. Feelings, though, are different. Feelings are what happen when the brain monitors the physiological emotional state of the body.

In other words, the body's physiological response to an external stimulus precedes our subjective experience of it. Or, to put it as psychologist William James did, "we feel afraid because we tremble." Not the other way around.

But it isn't so reasonable to suggest that the quality of their emotional lives is equivalent to those of young humans. That's because cognition interacts with emotion in a more sophisticated way, even for human children.

Mary Helen Immordino-Yang studies cognition and emotion at the University of Southern California's Brain and Creativity Institute. She explained to me that while dogs do have feelings, they're always immediate and situational. A dog might see a leash and run to the door with excitement about the impending walk around the neighborhood. Or she might hear a can opener and start salivating in anticipation of dinner. They're simply responding to a learned association. "Human feelings are much more complex in that they can transcend the immediate context," she told me by email. "We can not only feel our current emotion, like dogs can as well, but we can feel emotions about situations that are not actually happening now." We regularly experience feelings and emotions related to imagined future scenarios, or to prior, remembered events, or to abstract, hypothetical ideas. Our emotions and feelings are not limited to the immediate context in which we find ourselves.

What Berns actually found was neurobiological evidence that dogs maintain learned associations between arbitrary stimuli, like hand motions, and rewarding experiences, like eating. And at least part of that process occurs in the caudate nucleus in dogs, as in humans. Which makes sense, since the caudate is known to be involved in the evaluation of stimuli as pleasant or unpleasant.

But dogs aren't unique in having in-the-moment feelings. Researcher Silje Kittilsen of the Norwegian School of Veterinary Science writes in a paper in the journal Behavioural Processes that fish, too, have emotions. If dogs get to be classified as "like us" on the basis of their emotions, then fish must come along for the ride.

Like dogs, fish can also learn to associate external events with positive rewards. One researcher trained cod to associate a light with food. Then, when presented with the light, the fish anticipated the reward by gathering in the feeding area. That anticipatory behavior was maintained for three months. And like pigs, if cod are provided with environmental enrichment, they're more likely to explore novel stimuli. That means that fish, like mammals, can maintain a positive emotional outlook on the world ("optimism") or a negative one ("pessimism"). They can also be trained to avoid negative events. Researchers found that after learning to associate a flash of light with a handheld net, rainbow trout and Atlantic salmon avoid being caught by escaping from one part of an aquarium into another as soon as the light appears.

As Kittilsen beautifully points out, it's hard for humans to see fish as having emotions. "They are often spoken of in terms of ‘crops’ and ‘harvesting’ in the industry and we most often encounter them when they are flopping helplessly around on the shore or laying very still in the freezer at the supermarket." If a dog's ability to predictably anticipate rewarding experiences means that they're like humans, then surely the equivalent behavior in cod and trout should include them in the club of human-like critters as well.

Why the rush to humanize the dog, but not the salmon?

Perhaps domestication has allowed us to see a bit of ourselves in our canine companions. We made dogs in our own image. We were so successful in domesticating dogs that they even outperform chimpanzees when it comes to understanding human social cues. Unlike other animals, dogs do not need their desired behaviors to be reinforced with food; praise from a human is reward enough. Given their unique place in human culture, it's easy to see why we look into Fido's eyes and see ourselves reflected back.

It's easier to find humanity in a species that we already think of as part of our families, in animals that we allow to sleep on our beds, than to ponder the emotional lives of the creatures that adorn our dinner plates. Imagine, just for a second, that the animals we shove down our throats can experience the same kinds of emotions as dogs. What if, like Fido, they can be fearful, or optimistic? Research like Kittilsen's suggests that they can. Does that make it harder to scarf down a plate of fish sticks?

Rather than selectively allowing certain critters into the club of species that are like us, we should probably simply remember that humans aren't as special as we think we are. Instead of advocating for the protection of animals by leaning on their apparent similarity to our own species, perhaps we can just work to avoid needless suffering in all animals -- human-like or not.