The South is holding America hostage

The Tea Party's not crazy -- they had a plan. Now liberals and progressives need one, too 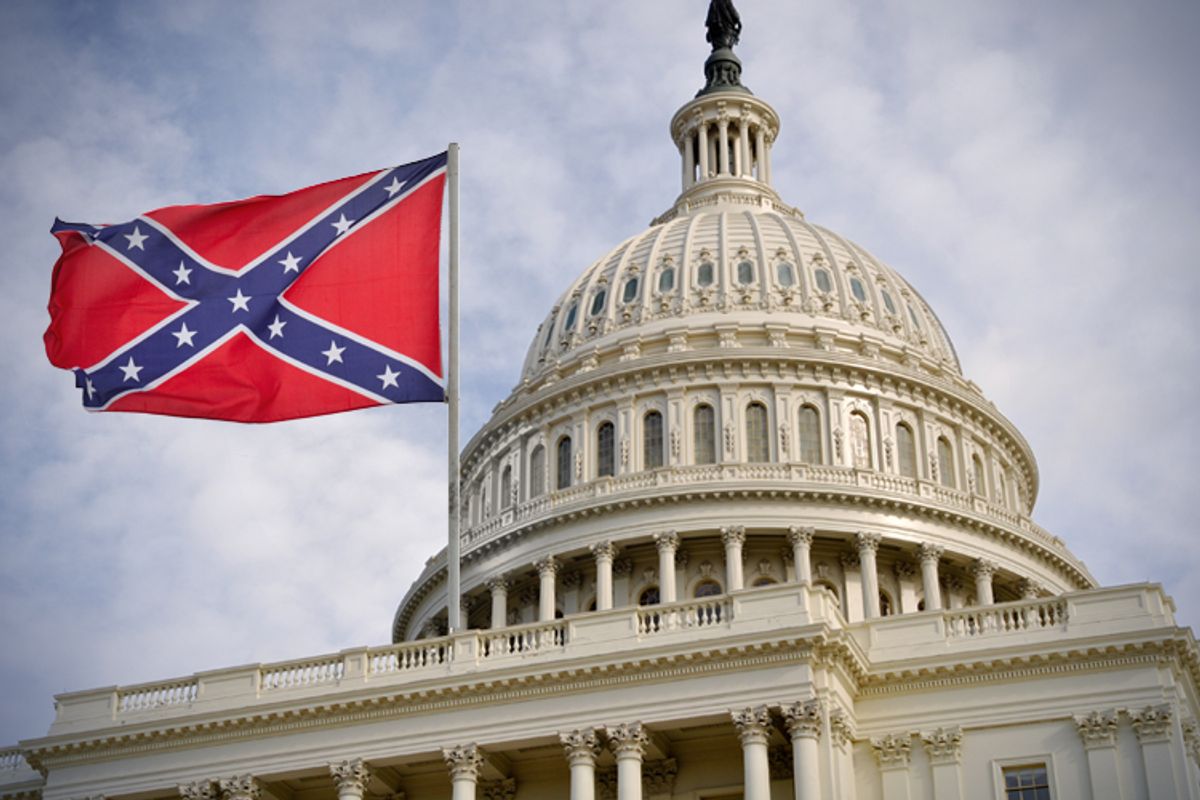 When I have described the well-considered, coherent political and economic strategies of the conservative white South, as I have done here, here and here, I am sometimes been accused of being a “conspiracy theorist.” But one need not believe that white-hooded Dragons and Wizards are secretly coordinating the actions of Southern conservative politicians from a bunker underneath Stone Mountain in Georgia to believe that a number of contemporary policies — from race-to-the-bottom economic policies to voter disfranchisement and attempts to decentralize or privatize federal social insurance entitlements — serve the interests of those who promote them, who tend to be white Southern conservatives.

Just as a strategy is not a conspiracy, so it is not insanity. Ironically, American progressives, centrists and some Northern conservatives are only deluding themselves, when they insist that the kind of right-wing Southerners behind the government shutdown are “crazy.” Crazy, yes — crazy like a fox.

Another mistake is the failure to recognize that the Southern elite strategy, though bound up with white supremacy throughout history, is primarily about cheap and powerless labor, not about race. If the South and the U.S. as a whole through some magical transformation became racially homogeneous tomorrow, there is no reason to believe that the Southern business and political class would suddenly embrace a new model of political economy based on high wages, high taxes and centralized government, rather than pursue its historical model of a low-wage, low-tax, decentralized system, even though all workers, employers and investors now shared a common skin color.

So the struggle is not one to convert Southern Baptists to Darwinism or to get racists to celebrate diversity. The on-going power struggle between the local elites of the former Confederacy and their allies in other regions and the rest of the United States is not primarily about personal attitudes. It is about power and wealth.

For some time, the initiative has rested with the Southern power elite, which knows what it wants and has a plan to get it. The strategy of the conservative South, as a nation-within-a nation and in the global economy, combines an economic strategy and a political strategy.

The economic strategy is to maximize the attractiveness of the former Confederacy to external investors, by allowing Southern states to out-compete other states in the U.S., as well as other countries if possible, in a race to the bottom by means of low wages, stingy government welfare (which if generous increases the bargaining power of poor workers by decreasing their desperation) and low levels of environmental regulation.

If voter suppression and vote dilution strategies fail, the Southern conservatives can still try to ward off unwelcome federally-imposed reforms that might weaken control of the Southern workforce by Southern employers and their political agents, by policies of devolving federal programs to the states, privatizing federal programs like Social Security and Medicare, blocking the implementation of new federal entitlements like Obamacare or a combination of these strategies.

To date the response of progressives and centrists, as well as moderate conservatives in the North (who have a quite different tradition) to what might be called the Southern Autonomy Project has been feeble and reactive. The South acts, the rest of the country reacts.

Here Midwestern Republican legislatures or governors try to copy the South’s anti-labor “right-to-work” legislation, and labor activists and liberals react.  The legislatures in the South and their allies elsewhere pass voter suppression laws, and civil rights groups scramble to counteract them. Now the Southern-dominated Tea Party in the House shuts down the government and threatens to force the federal government into default. In this game of “Whack-a-mole,” the Southern right and its neo-Jacksonian allies in other parts of the country always has the initiative.

Instead of waiting for the next Southern conservative outrage, and treating it as a single, isolated example of inexplicable craziness, the rest of America from center-left to center-right should recognize that it is dealing with different aspects of a single strategy by a regional elite — the Southern Autonomy Project. It is time for the non-Southern American majority, in alliance with many non-elite Southerners of all races, to target and attack every element of the Southern Autonomy Project simultaneously. If the neo-Confederates want to wage political and economic war, their fellow Americans should choose to respond with political and economic war on all fronts, not on the terms and in the places the Southern conservatives choose.

Setting political difficulty aside, it is intellectually easy to set forth a grand national strategy that consists of coordinated federal policies to defeat the Southern Autonomy Project.

A federal living wage.  At one blow, a much higher federal minimum wage would cripple the ability of Southern states to lure companies from more generous states which supplement the too-low present federal minimum wage with higher local state or urban minimum wages.  (Strong national unions could do the same, but that is not a realistic option at present.)

Nationalization of social insurance.  Social insurance programs with both federal and state components, like Medicaid and the Affordable Care Act (“Obamacare”), allow Southern states to be stingier than many other states, creating more desperate workers who are more dependent on the mercy of employers and elite-dominated charities. Completely federalizing Medicaid (as President Ronald Reagan suggested!) and other hybrid federal-state social insurance programs would cripple the Southern Autonomy Project further.

Real voting rights.  Using the authority of the Fifteenth Amendment to the U.S. Constitution, Congress should completely federalize voting requirements for all federal, state and local elections, making it as easy as possible for U.S. citizens to vote — over the objections of kicking and screaming neo-Confederates.

Abolish the Senate filibuster.  The filibuster is not part of the U.S. constitution. It has been used by Southern white conservatives from the nineteenth century to the twenty-first to preserve Southern white power and economic privilege. This relic of premodern  British parliamentary politics should be abolished. Democracy means majority rule. If the Southern Right loses a battle in Congress, it can try to round up allies and win next time. It should no longer be able to paralyze the Senate, the Congress or the federal government as a whole.

Put all these policies and perhaps others together, and you have a National Majority Rule Project capable of thwarting the Southern Autonomy Project. The best defense is a good offense.

Does saying this make me, a white Southerner, a traitor to the South? Among the beneficiaries of a National Majority Rule Project, if it succeeded, would be middle- and low-income white Southerners, whose interests have never been identical with those of the local oligarchs. Particularly among the Scots-Irish of Appalachia and the Ozarks, there have always been many Southern white populists and radicals — from the West Virginian and Kentucky Unionists of the Civil War to New Deal liberals in Texas — who have understood the need to ally ourselves with non-Southerners in national politics to defeat the local Nabobs, Bourbons and Big Mules. The true Southern patriots are those of us who want to liberate the diverse population of the South from being exploited as wage earners and from being disfranchised or manipulated as voters. Another term for the National Majority Rule Project might be the Southern Liberation Movement.

Will the initiative remain with aggressive Southern reactionaries, as their fellow Americans try to appease them or react on a case-by-case basis against a feint here or a diversion there? Or will an aroused national majority, tired of being pushed around by a selfish Southern minority of the shrinking American white majority, finally fight back?