"Romeo and Juliet": The Bard for Twihards 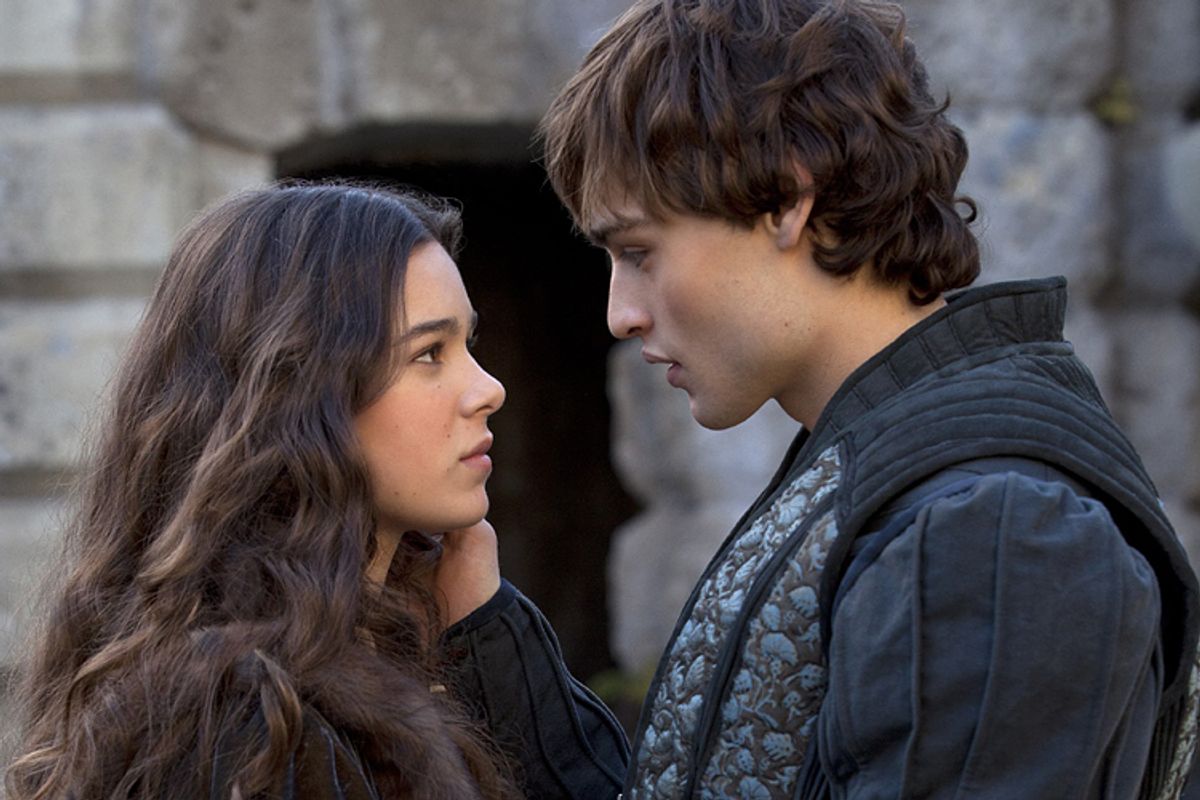 Director Carlo Carlei’s totally unnecessary new film version of “Romeo and Juliet,” as scripted by “Downton Abbey” creator Julian Fellowes, has a blushing, virginal, “Twilight”-flavored teen energy to go with its storybook Italian settings. I’m explaining why I liked the film, or at least enjoyed it, despite its barely tolerable tendency to fiddle with the Shakespearean story and text. In playing the doomed Juliet as, of all things, a teenage girl – closer to childhood than to adult female sexuality – 16-year-old Hailee Steinfeld, of “True Grit” fame, lends the story a distinctive veracity and vulnerability. (Norma Shearer played the role for George Cukor at age 34, and one touring company in colonial America featured a Juliet who was actually the mother of the actor playing Romeo. Kinky!)

While the setting and costuming surrounding the teen lovers is strictly literal-minded period piece – Carlei shot most of the film in Verona, the story’s putative setting, although Shakespeare had presumably never been there – the supporting cast is good enough to overcome the feeling of stodginess. As he so often does, Paul Giamatti nearly takes over the film as the benevolent but meddlesome Friar Laurence, developer of the harebrained scheme that ultimately sends Romeo and Juliet to the grave. I’d never quite noticed before that there are three prongs to the fork that skewers our young lovers: The cruel and idiotic warfare conducted by their elders, their own romantic foolishness, and the disastrous intervention of adults (Friar Laurence and Juliet’s nurse, played by Lesley Manville) who are trying to be helpful.

Damian Lewis of “Homeland” is also terrific as Lord Capulet, Juliet’s arrogant and calculating father, determined to shove her into a strategic marriage with Count Paris (Tom Wisdom). Natascha McElhone brings a delicate balance to the character of Lady Capulet, often a nonentity but here depicted as a loving mother all too willing to sacrifice her daughter in the name of honor and convenience. She yearns for the best but is unwilling to endanger her own privilege. Kodi Smit-McPhee, of “Let Me In” and the forthcoming “Dawn of the Planet of the Apes,” plays Romeo’s young friend Benvolio with a wounded wide-eyed innocence.

Making strategic cuts and rewrites to Shakespeare for 21st-century film audiences is an entirely defensible practice, but Fellowes takes liberties that go well beyond that, streamlining the plot in “West Side Story” fashion and inventing entire scenes from whole cloth. Sure, we get snippets of famous dialogue – “But soft! What light through yonder window breaks?” and “Wherefore art thou Romeo?” and “Parting is such sweet sorrow” and so on – but compressed and elided into a Cliff’s Notes structure that barely resembles the original. “Romeo and Juliet” is too soapy and improbable to count among the Bard’s very best plays, but it surely has some of his best dialogue, and messing it up this much is close to inexcusable.

Carlei and Fellowes are presumably trying to create a starter-kit “R&J” for 11-year-old girls – low on violence and high on heartbreak -- and despite all my misgivings the cast, the softcore-porn photography of the glorious Verona settings (that rose-shrouded balcony!) and the fervid emotion almost gets us there. No permanent harm is done here, and the hate being showered upon Steinfeld, Carlei and Fellowes by many of my fellow critics is a bit overwrought. No harm will be done by letting Bard-curious kids of the right age check this one out, but Franco Zeffirelli’s classic 1968 version, with similar hormone-fueled aims and far greater fidelity to the source material, remains a far superior option (and is easily viewed from Amazon or other online sources).